The LG 42LK450 42-inch LCD HDTV is definitely something to consider, according to reviewer Andrew Robinson. While it does lack some features, this affordable television meets the essentials for an HDTV.

Recently, while perusing my local big box store, I happened upon what appeared to be two identical HDTVs. Both displays were from the same manufacturer, offered up 50-inches of HD goodness with all the bells and whistles that one could ask for in a modern HDTV – minus 3D of course. One cost one price and the other exactly $500 more. On the surface they appeared to be identical displays so I thought maybe there had been a mistake. It wasn’t until the salesman pulled up the displays’ spec sheets did we notice the only difference – dynamic contrast ratio. One display, the cheaper one, had a dynamic contrast ratio of four million to one, whereas the more expensive display touted six million to one. $500 more for a “feature” that will make ZERO difference (at those insane figures) in the display’s overall image quality got me thinking: what does one really need in a HDTV?

Barring the ability to play back 3D content, what’s required of an HDTV is actually pretty basic and comes down to only a few important factors: size, resolution, refresh rate, inputs and calibration controls. The rest can fall by the wayside. Wanting to find the best, most basic HDTV available, I set out for my local Wal-Mart where HDTVs are sold solely on price versus what “features” they offer the end user. After glancing at more than a half dozen sets I settled on a 42-inch LCD from LG. The LG 42LK450 is a 42-inch, 1080p HDTV that has a reported contrast ratio of 100,000:1, a refresh rate of 60Hz and is ISFccc ready – all for $699 retail. If you’re looking to enjoy SD material and HD content, be it broadcast or Blu-ray, the 42LK450 technically has everything you need.

The 42LK450 measures 40 inches wide by 25 inches tall and three inches deep so it’s not as thin as some of the LED based LCDs, but I argue if you’re using the included table stand then all HDTVs are 10 or more inches deep. The 42LK450 weighs a surprising 33 pounds with the stand, which again is heavier than some, but does give it a more solid, better-constructed feel. As for inputs – the 42LK450 has three HDMI inputs along with two component inputs as well as inputs for RF, AV, RGB, PC, RS-232 and USB 2.0. There’s even a digital audio output (optical) if you want to pair the 42LK450 to a soundbar.

The 42LK450 comes with a bevy of calibration controls including two ISF picture modes: “ISF Expert 1” and “ISF Expert 2.” The differences are geared toward optimizing the 42LK450’s image for either daytime or nighttime viewing. Speaking of optimizing the 42LK450’s image – it also has LG’s Intelligent Sensor, which automatically adjusts the display’s image depending on the ambient room conditions, a neat feature for sure but one that ultimately gets turned off if you’re serious about your image fidelity.

In terms of performance the 42LK450 gets right to the point and never deviates, resulting in a rich, HD experience with zero fluff. When I say fluff I mean features such as 120Hz motion processing, auto dimming (which the 42LK450 has), Web-enabled Apps like Twitter and Facebook, convoluted menus and so on and so forth. The 42LK450 is about as plug and play as you can hope for and thanks to its ISF picture modes, looks pretty good out of the box. The image isn’t ultra or artificially crisp but it’s far from soft or vague. Colors are rich without seeming overly saturated and black levels are solid but not class leading. Motion, despite being only a 60Hz display, is smooth with few (if any) artifacts. Truthfully, the 42LK450 matched the performance of my reference Samsung display that I’ve had for three years now and paid upwards of $3,000 for when new.

Read about the high points and low points of the LG 42LK450 HDTV on Page 2. 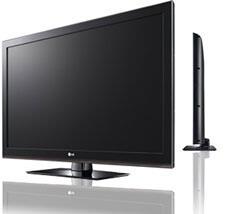 High Points
• The 42LK450’s build quality, despite being a budget conscious HDTV is first rate and among the more nicely designed budget HDTVs you’ll find.
• The 42LK450’s setup is easy and thanks to its ISF picture modes requires little to no calibration depending on your environment. Given the 42LK450’s affordable price tag, I recommend picking up Monster’s ISF Calibration disc for fine-tuning purposes once you’ve become adjusted to its performance and menus.
• The 42LK450’s image quality is good overall with natural color reproduction, solid black levels and appropriate detail throughout. While not class leading in any one area, the sum of its parts is more than enough to provide you with a rich HD viewing experience.

Low Points
• The 42LK450 could use another HDMI input or two for three, two back and one side, just isn’t going to be enough for some – especially gamers.
• If you’re into streaming content such as through Netflix or Hulu and are looking for a new HDTV that would allow for that, then the 42LK450 isn’t going to be for you. However, you could always buy a Blu-ray player with Wi-Fi and Apps and skirt the issue that way.
• If you’re looking to adopt 3D then, again, the 42LK450 isn’t for you, though LG does make some fine 3D displays these days.

Competition and Comparison
We don’t spend enough time talking about super affordable HDTVs in my opinion but that doesn’t mean there aren’t any out there; in fact I found several 40 to 47-inch displays on my romp through Wal-Mart that all seemed to compete favorably with the LG 42LK450 that I ultimately chose. One could consider Sony’s 40-inch BRAVIA HDTV, the KDL-40BX420, at $729 retail or even Sanyo’s 46-inch DP46841 HDTV at $578 retail. Of course there’s always Vizio and they’re newest line of affordable LCDs feature all the bells and whistles, including 3D. Vizio’s new 42-inch 3D LCD HDTV retails for $729.99.

For more information on HDTVs including the latest news and reviews please check out Home Theater Review’s HDTV page.

Conclusion
While the LG 42LK450’s suggested retail price may say $699, the truth is it’s available at a far more affordable price if you shop around a bit, making it an even better value in my opinion. While the 42LK450 may lack some of the so-called features found in many higher-end HDTVs available today, its lack doesn’t equal a lack of quality. If you look past a lot of the current “it” features many HDTV companies are trying to sell you, then most every HDTV really is just an 42LK450 at heart, and as my mother always said, it’s what’s on the inside that counts. If you’re in the market for a high performance, high value HDTV then I recommend taking a look at the LG 42LK450.