At this year's CEDIA Expo in Denver, LG released new details about its staggering 88-inch 8K OLED TV, as well as its new 75-inch 8K NanoCell TV (NanoCell being LG's new name for its proprietary implementation of quantum dot technology).... 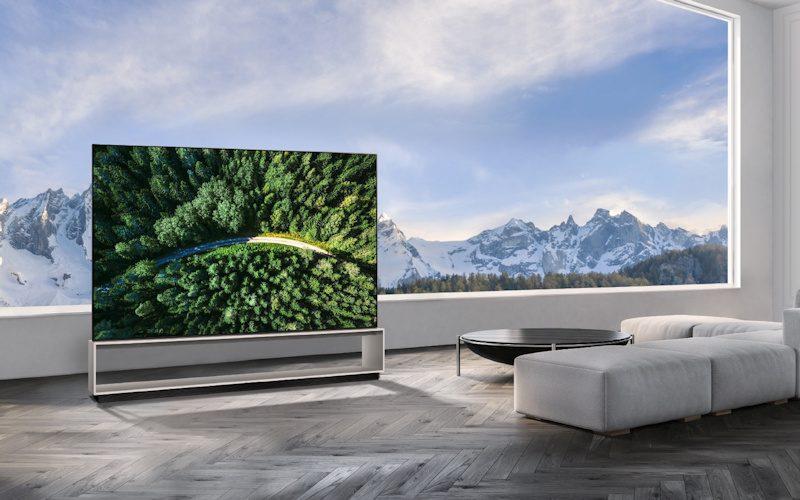 At this year's CEDIA Expo in Denver, LG released new details about its staggering 88-inch 8K OLED TV, as well as its new 75-inch 8K NanoCell TV (NanoCell being LG's new name for its proprietary implementation of quantum dot technology). Pricing for the new displays will be $29,999 MSRP for the 88-inch OLED and $4,999 MSRP for the 75-inch 8K NanoCell, with both displays now available from select retailers.

At the same time, LG introduced a new model in its UHD CineBeam projector lineup. The new HU70LA will retail for $1,799 when it launches in October, and promises to deliver up to 140 diagonal images of screen size, with 1500 ANSI lumens brightness and up to 92-percent coverage of the P3 color space.

Read on for full details from both press releases below:

LG developed both 8K models to exceed industry standards for measurement set forth in the Information Display Measurements Standard (IDMS) established by the International Committee for Display Metrology (ICDM). Tests performed in accordance with these universally-referenced industry standards resulted in both the LG SIGNATURE OLED 8K and LG 8K NanoCell TVs achieving CM values in the 90 percent range, guaranteeing that viewers will be able to actually experience all of the additional detail in the 8K content when viewed on their LG 8K TVs.

"Over the past six years, LG has led the rise of OLED TV to the absolute pinnacle of the TV world in terms of picture quality, design and innovation," said Tim Alessi, head of home entertainment product marketing at LG Electronics USA. "Today, LG elevates OLED TV to yet another level with the debut of the world's first 8K OLED TV and in the largest OLED screen size to date. Even more importantly, we're delivering real 8K across LG OLED and NanoCell models in a way that consumers will be able to truly see the stunning detail that 8K resolution delivers."

The 88-inch LG SIGNATURE OLED 8K TV is the largest OLED TV ever. It delivers 8K Ultra HD resolution (7,680 x 4,320) with nearly 33 million self-emitting pixels, equivalent to 16-times the number of pixels in a Full HD TV and four-times that of a 4K UHD TV. The LG SIGNATURE OLED 8K boasts a sophisticated, minimalist design that features a brushed aluminum stand and a virtually bezel-less display, and comes with an integrated 80W speaker system for powerful sound.

Both 8K TVs feature 8K upscaling and improved noise reduction, upgraded from four- to up to six-steps. The result takes full advantage of the 33 million-plus pixels when upconverting content from native 4K or Full HD. This first-class performance is made possible by LG's second-generation α9 Gen 2 Intelligent Processor 8K. LG's advanced chip elevates picture and sound quality using deep learning technology and access to an extensive database, enabling it to recognize source quality and optimize any kind of content. The α9 Gen 2 8K chip also analyzes ambient conditions to achieve the perfect level of screen brightness at all times.

Rich, resonant audio complements the stellar visual output of the TVs to further enhance viewer immersion. An intelligent algorithm can up-mix two-channel audio to virtual 5.1 surround sound, supplying a three-dimensional soundscape that brings movies, music and sporting events roaring to life. The TVs are also WiSA Ready for wireless home theater with uncompressed 16-bit audio on up to 5.1 channels.

For even greater convenience, both the 88Z9 and 75SM99 models support Apple AirPlay 2 and HomeKit, and built-in versions of the Google Assistant and Amazon Alexa, providing easy voice control of the TV and connected smart devices making it simple for users to get the information they want. LG Debuts Expanded 4K UHD CineBeam Projector Lineup in U.S.
LG Electronics USA introduced a new LG CineBeam 4K UHD projector. The new projector (model HU70LA), which is on display this week at the CEDIA EXPO 2019, has a suggested retail price of $1,799 and will be available at select LG-authorized retailers in October.

With a compact design, the HU70LA LG CineBeam LED Projector provides an impressive home theater experience with a deep and rich picture up to 140 inches (measured diagonally), and brightness of 1500 ANSI lumens that covers approximately 92 percent of the DCI-P3 color space. The projector employs a four-channel LED light source to generate red, green and blue, with the additional fourth LED boosting image brightness, contrast and generating more vivid colors with more nuanced tonality (compared to conventional LED projectors) by adjusting green levels. The HU70LA, as well as the HU85LA, are IP controllable via Control 4, Savant and Crestron.

The HU85LA CineBeam Laser Projector, also demonstrated at CEDIA Expo, is LG's first Ultra Short Throw model, generating 2,700 ANSI lumens to deliver vibrant and crisp images up to 120 inches (measured diagonally) from placement of only 7.2 inches away from the wall. The stylish projector is housed in a minimal design for a cinematic viewing experience.