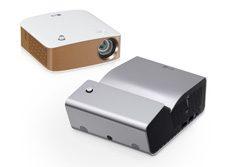 At next month's IFA in Berlin, LG will introduce two new Minibeam portable projectors. The battery-powered, ultra-short-throw PH450U ($649.99) and PH150G ($349.99) are 720p DLP projectors rated at 450 and 130 lumens, respectively. Both offer HDMI ports with MHL capability, USB ports, Miracast wireless screen sharing, and built-in speakers. The new models will be available in a September/October time frame.

From LG
LG Electronics has announced plans to expand its Minibeam series of portable projectors. Debuting next month at IFA 2016 in Berlin, the two newest projectors in the LG Minibeam series (models PH450U and PH150G) bolster screen sharing capabilities with Miracast and wireless display, expanded brightness and superior portability for flexible viewing in any sized space.

The PH450U is among the brightest battery-powered ultra short-throw projectors available in the market today. Equipped with up to 450 lumens, users can create a cinematic experience inside or outside of the home with the ability to display a sharp 80-inch HD (1280 x 720) image from a distance of only 13 inches from the screen. The PH450U also can be set upright to render images on any flat, horizontal surface, allowing users to transform desks, tables and even floor surfaces into movie screens.

From a connectivity standpoint, users can seamlessly transfer content directly to the projector via an HDMI cable with MHL capability, or via a USB drive, for the ultimate in viewing versatility. And with a rechargeable 2.5-hour battery built in, users can take this 2.4-pound projector anywhere, anytime without worrying about plugging into a power source.

For those looking for an even more compact option, the new LG PH150G projector offers the same sleek design aesthetic: At just 1.1 pounds, the extremely portable PH150G offers up to 130 lumens of brightness and up to a 100-inch screen in clear HD resolution (1280 x 720) along with a rechargeable 2.5-hour battery built in.

Both models come equipped with LG's triple wire-free connectivityfor a viewing experience free of wired connections for power, audio and video sources. With a built-in wireless mirroring function, it also can connect to a smartphone or a tablet for projection. In addition to built-in speakers, users can also stream sound directly from the projector to a Bluetooth compatible sound system like home audio speakers, headphones or portable speakers to pair big sound to the big viewing experience. And with long-lasting rechargeable batteries, Wi-Fi Screen Share connectivity and Bluetooth compatibility, LG Minibeam projectors give users unprecedented flexibility in a portable package.