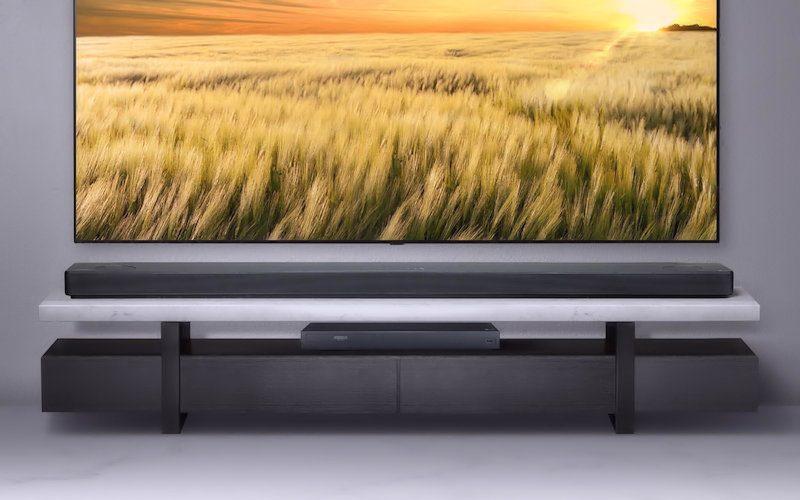 I pick up a small remote, press a button, and say, "Hey Google! Turn on the media room lights and dim them to 20 percent." The LG SL10YG soundbar responds immediately, its built-in Google Assistant doing just what I requested.... 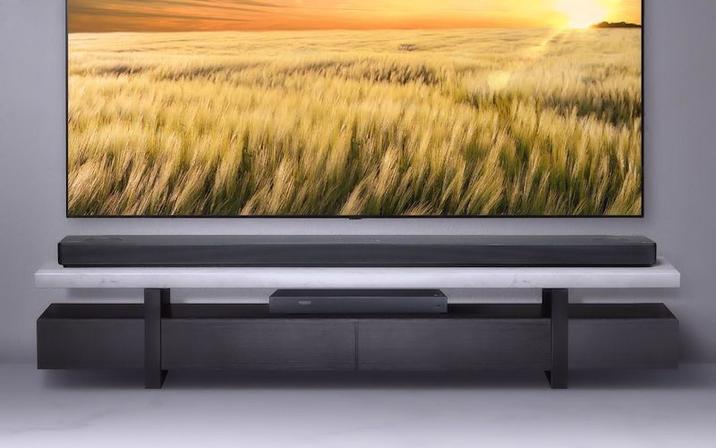 I pick up a small remote, press a button, and say, "Hey Google! Turn on the media room lights and dim them to 20 percent." The LG SL10YG soundbar responds immediately, its built-in Google Assistant doing just what I requested. I ask for more. "Hey Google! Play my Pink playlist on Spotify and turn up the volume."

For the most part, all the music I played on the SL10YG sounded great. That was true of movie dialogue, too. It was almost always discernible without having to turn up the volume or make any equalization adjustments. Concussive sound effects such as explosions boomed convincingly.

There is a lot more to like about LG's top-of-the-line soundbar, which carries a suggested retail price of $1,299.99. But you should also know what's not so great, because it might be a deal-breaker when deciding if the SL10YG is for you.

LG calls the SL10YG a 5.1.2 soundbar, but I don't. As far as I'm concerned, it's more like a 3-and-a-half.1.2 system because the two alleged "rear" speakers are actually in front, at the sides of the soundbar. Although the bar contains seven actual speakers, the rear-channel sound is produced by those left- and right-side speakers bouncing sound off the side walls of a room with the help of some Meridian digital signal processing. Like the front left, right, and center channels, 50 watts of power is channeled to each side-firing speaker to perform its task. During my testing, they failed to effectively accomplish their mission with surround sound movie or TV programming. It didn't matter what I played or where it came from--streaming, 4K disc player, Blu-ray player. Not once did any of the audio ever sound like it was truly coming from behind me. This, of course, impacts the realism of sound effects. A fighter jet soaring overhead never quite sounds like it has flown past. Bullets intended to sound as if they were shot from behind and whizzing past your shoulder sound instead like they came from a shooter somewhere off to your side.

Maybe my setup isn't the best for the SL10YG's physical design or its DSP, but the soundbar sat unobstructed on a large TV stand, the side walls about nine and 8.5 feet from the closest end of the speaker. The walls are bare, devoid of curtains or wall coverings. That seems like a room that should suit the SL10YG's psychoacoustics, but the sound effects were never convincing, regardless of which pre-configured equalization mode I chose (the default automatic Adaptive Sound Control or the user-selectable Standard, Music, Movie, Bass Blast, Bass Blast+ modes). I suspect the surround effects would be much more convincing in a smaller room, or maybe with a pair of actual rear speakers connected to the SL10YG. They are available, although they weren't provided by LG for testing. The $180 SPK8-S speakers consist of an amplifier module that connects wirelessly to the SL10YG soundbar and two small speaker modules that must be connected to the module by speaker cable. Each speaker is powered by 70 watts.

The SL10YG's height effects also disappointed. The soundbar can decode both Dolby Atmos and DTS:X object-based soundtracks--an upgrade over last year's similar SK10Y, which decoded only Dolby Atmos--and uses a pair of 50-watt, upward-firing speakers in the top of the soundbar to create its height effects. The idea is to create the effect by bouncing sound off a ceiling, a common technique for Atmos and DTS:X-enabled soundbars. The Vizio SB36512-F6 that I reviewed last year, for example, did this very convincingly. The SL10YG did not. Both soundbars were tested in the same spot in the same room beneath the same eight-foot ceiling.

There were two scenes in particular that excited me while testing the Vizio, but the results were less impressive when I played those same scenes again with the SL10YG. Regardless of which equalization mode I chose, LG's soundbar didn't give me the same sense of being underground during the Roman catacombs shootout scene in John Wick: Chapter 2.


Nor did the helicopter ever seem to sound like it was truly hovering overhead during the rhinoceros stampede scene in Jumani: Welcome to the Jungle.

Although the verisimilitude of movie and TV surround and height effects failed to impress, the SL10YG nevertheless was capable of filling my 25-foot by 16-foot room with dynamic highs and booming bass. The volume could be cranked up loud enough to be easily heard at a loud party with imperceptible distortion. Imaging on the front plane was accurate with movies and music alike. Individual instruments were easy to hear and their virtual locations easy to detect. Dialogue always appeared to come from the onscreen actors who were speaking.


The SL10YG also did a nice job of recreating the ambience of live concerts. I listened to Dave Matthews and Tim Reynolds Live at Radio City on Blu-ray and the DVD-Audio version of Crosby-Nash: Another Stoney Evening. The crowd noise at the beginning and end of the Crosby-Nash concert made me feel as if I were part of that crowd. And I was immediately awed by the job the soundbar did capturing the grandeur of and spaciousness of Radio City Music Hall during the Dave Matthews concert.

The bar itself is one of the widest I've ever seen at 56.8 inches. LG recommends that it be used with a 55-inch or larger screen and includes a wall mount bracket in case you don't have a stand wide enough to support the SL10YG. At 5.8 inches, the bar also is deeper than most and weighs a brawny 16.5 pounds. However, it is only 2.5 inches high, which is nice because that means it won't block the screen, bezel, or IR remote sensor of a typical stand-mounted TV when sitting in front of one. The 220-watt wireless subwoofer is not as big as the booming bass it produces: 15.4 inches high and 12.3 inches deep, but only 8.7 inches wide. It weighs 17.2 pounds.

The SL10YG comes with an optical cable and a nice remote with real--not membrane--buttons. One of those buttons is dedicated to accessing Google Assistant, which can perform its usual tricks and also control the soundbar's volume and many of its basic functions. Given the Google connection, it's no surprise that the SL10YG also has Chromecast audio (but not video) built in. Other connectivity highlights include Wi-Fi, Bluetooth 4.2, a USB port, and three HDCP 2.2 HDMI ports (two inputs and one Audio Return Channel output. The HDMI connections support 4K and CEC.

In addition to Atmos and DTS:X, the SL10YG decodes all the major Dolby and DTS codecs and supports high-resolution, 24-bit/192kHz audio playback and popular audio formats such as MP3, FLAC, WAV, and ACC. Lower resolution music sources benefit from 24-bit upsampling,


The much smaller and less expensive Vizio SB36512-F6 ($500) has fewer features, but is a true 5.1.2 system with actual surround speakers and delivers more realistic height and surround effects. Its big brother, the $1,000 Vizio SB46514-F, adds an even larger and more powerful subwoofer and two discreet rear height speakers for a true 5.1.4 setup that sounds great.

Then there's Samsung's Harmon/Kardon HW-N950. This $1,700 system remains the best sounding 7.1.4 soundbar we've tested, but it has recently been superseded by a new model (HW-Q90R) that we're eager to test.

Conclusion
LG's SL10YG is a large soundbar that delivers big, immersive sound and does a mostly wonderful job with both movies and music. But it didn't do a very convincing job with surround and height effects. If that's important to you, make sure you can get your money back if the bar's spatial performance doesn't meet your expectations after auditioning it in your home.