LG has built up a rather robust web platform. It makes sense that company would release a set-top box to access this platform. The LG Smart TV Upgrader is just that. Adrienne Maxwell takes a look to see how it stacks up against its competition. 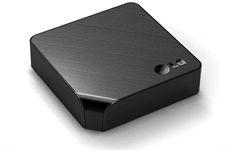 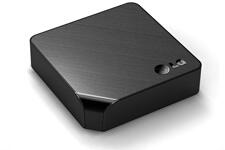 It’s the next logical step for a big-name A/V manufacturer that has developed a robust Web platform for its TVs and Blu-ray players. Why wouldn’t you put that same platform in a standalone box that people can use with their non-networkable HDTVs? LG and Sony have both embraced this approach, and I suspect others will follow suit. LG’s standalone box is called the Smart TV Upgrader–so named because LG’s Web platform is dubbed “Smart TV.” We have not performed a hands-on review of the Smart TV Upgrader (ST600), but here is a more comprehensive look at its features. LG’s Smart TV service currently includes access to Netflix, Amazon Instant Video, VUDU, Hulu Plus, CinemaNow, YouTube, MLB.TV, and Picasa, among others. An Apps store and Web browser are also available. The box supports personal media streaming from a computer or server, using either PLEX (with supplied software) or DLNA, and you can directly cue up media content stored on a USB drive.

The ST600 has a tiny form factor, measuring just 4.3 x 4.3 x 1.2 inches and weighing a mere 0.66 pounds. The brushed-black case includes one HDMI output, one optical digital audio output, a USB 2.0 port, and an Ethernet port for a wired network connection. The box also has integrated 802.11n. LG has not included any type of analog A/V output, so it’s not compatible with older, non-HDMI-equipped TVs. A small, non-backlit remote is included; its simple button layout features a navigation pad with touchpad-like control, transport controls, and four color buttons, plus Home, Back, Menu, and Power. Unfortunately, the remote lacks a full QWERTY keyboard, which would make it easier to input text when searching for content or typing URLs. LG also offers a control app for iPhone, iPad, and Android smartphone users.

The Smart TV interface is a bit more cluttered than the Roku and Boxee designs, but it’s still a fairly logical layout. The Home menu is divided into three main options: Premium, LG Apps, and Web Browser. In the Premium area, LG’s video-on-demand options are excellent, covering all of the major bases with Netflix, Amazon, VUDU, Hulu Plus, and CinemaNow. On the music side, Pandora and Napster are included. The LG Apps store isn’t nearly as extensive as Apple’s or even Samsung’s at this stage, but it continues to grow. The Web browser is a full browser that supports Flash. A customizable toolbar runs along the bottom of the screen, allowing you to jump quickly to your favorite functions. Navigate to the right of the Home menu, and you’ll find the Smart Share menu, where you can access your personal media content–be it networked or connected via USB. Compatible file formats include AVI, MP4, WMV, Divx HD, XVID, MP3, WMA, JPEG, and PNG.

Read about the high points and low points of the LG Smart TV Upgrader on Page 2.

High Points
• The ST600 includes access to the hottest Web apps, including Netflix, Amazon, VUDU, Hulu Plus, YouTube, Pandora, and more.
• The box supports a 1080p resolution and 5.1 surround sound.
• It has integrated WiFi and an Ethernet port, for a wired or wireless solution.
• The ST600 supports DLNA/PLEX media streaming and has solid file-format compatibility.
• The form factor is minimalist.
• iPhone/iPad/Android control apps are available.

Low Points
• The remote lacks a full QWERTY keyboard for easier text input.
• The box lacks analog A/V output, so it’s not compatible with older TVs.
• The menu design and navigation aren’t quite as simple or straightforward as some of the competition.
•
Unlike the Boxee Box we recently reviewed, the ST600 doesn’t currently
incorporate free TV on-demand content offered by the likes of CBS.com
and NBC.com, although the nature of this evolving genre means that could
change.

Competition and Comparison
You can compare the LG Smart TV Upgrader
with its competition by checking out our reviews of the Boxee Box
and Roku 2. Learn more about media players by visiting our
Media Servers and MP3 Players
section.

Conclusion
LG’s Smart TV Upgrader is a compelling
addition to an ever-growing field of standalone streaming media players.
It boasts an excellent assortment of streaming VOD and music services
and supports personal media streaming, to boot. LG’s Website lists the
recommended price of the ST600 at $129, but it’s actually available for
under $90 through major retailers. That makes it less expensive than the
Apple TV and Boxee Box and puts it in the same ballpark as the
lower-priced Roku 2 boxes (which don’t offer the personal media
streaming options you get here). All in all, the ST600 offers the right
features at the right price.