LG's new Sound Bar Flex SJ7 ($399.99) is a three-piece surround sound system that includes two speaker units and a wireless subwoofer. The two speakers can be configured either in a left/right configuration up front or as a soundbar/rear-speaker combo.... 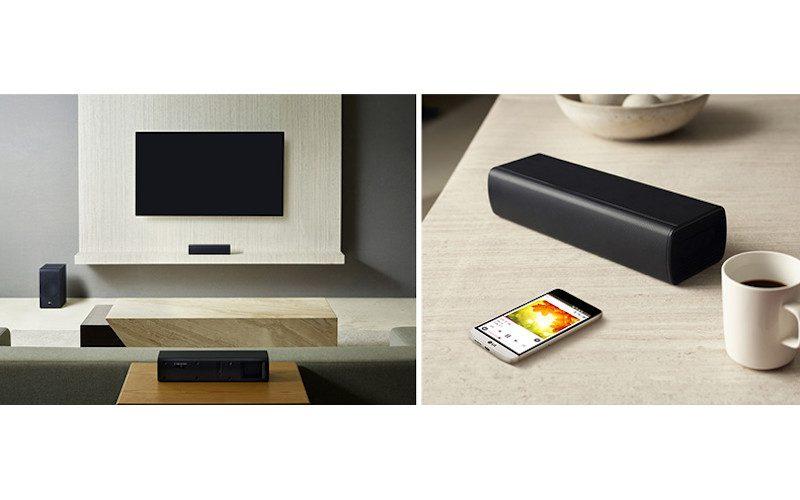 LG's new Sound Bar Flex SJ7 ($399.99) is a three-piece surround sound system that includes two speaker units and a wireless subwoofer. The two speakers can be configured either in a left/right configuration up front or as a soundbar/rear-speaker combo. That's where the Flex portion of the product name is earned.

The primary speaker serves as either the left speaker in "soundbar usage mode" or the front speaker in "rear usage mode" (LG's terminology), and it must be plugged into a power outlet. Its input panel features optical digital audio (a four-inch cable is included) and an HDMI 1.4 port, and there's one HDMI 1.4 output with ARC (Audio Return Channel). I ran all sources into my HDTV and passed them to the SJ7 via optical digital audio.

The secondary speaker, meanwhile, can serve as the right channel in soundbar usage mode, as the rear speaker in rear usage mode, or as a standalone portable speaker. You have the option of plugging it in or running it off of its internal Lithium-ion battery. A four-position switch on the backside allows you to set the configuration. Bluetooth is onboard, and you can wirelessly send the left stereo information to the primary speaker, if desired.

The SJ7 system comes with a nicely functional remote control and a Bluetooth remote app (currently for Android only). The primary and secondary enclosures are identical in size and look (the primary unit has a status LED that the secondary unit lacks). Each one measures 13.4 inches by 2.9 inches by 4.3 inches, and each houses four one-inch drivers. Bases are included, should you choose to orient these in a vertical right/left configuration. According to the product website, the speakers are wall-mountable by virtue of a single (rather small) screw in the center of each enclosure, but no mounting hardware is included or even referenced. This seems very much like an afterthought, especially considering all the thought that clearly went into the other aspects of this system.

The subwoofer measures 6.7 inches wide by 12.6 inches high by 9.9 inches deep and weighs 9.26 pounds. It sports a 5.25-inch front-firing driver with a rear port. All three pieces are black. In my opinion, LG chose the right form factor and size to accomplish both a clean, subtle look and still offer the performance expected from a dedicated surround sound and music playback system.

Performance
First things first, is the SJ7 better than any built-into-the-HDTV speaker? Yes, absolutely. Does it sound better than other soundbar/sub combos in the $399.99-and-under range? Definitely. I would put this up against some soundbar systems priced up to $1,200! Sure, my reference Sonos system--which is comprised of the Sonos three-channel Playbar, two Play:1s, and the Sonos SUB--creates a better soundstage and provides more sonic impact, but it costs $1,796, which is more than four times the price of this LG system. With the SJ7, you get good separation but no overhead and no 360-degree spacialization. Dialogue is clear and distinct. Music is full and smooth. At its loudest, the system never distorts, nor will it move anything off a shelf. I would say the sub doesn't start to make an impact until you dial up "22" on LG's volume scale of 1 through 40 (so just past halfway). Since you can't adjust the sub level separately, when you're doing some late-night movie watching or chilling out with music at lower volumes, you will miss the thump that larger subs can provide. The secondary unit's battery is rated at "up to four hours playback." (It took three hours and 40 minutes to fully charge it from flat.) Four hours is plenty of time to watch most movies, should you choose to set up the secondary unit as a completely wire-free rear channel for movie soundtracks. I watched The Abyss and listened to Talking Heads' Little Creatures album, along with several other movie and music demos across multiple genres, and the LG system never disappointed.

High Points
• The SJ7 can be set up in a variety of ways, and its aesthetics are terrific.
• At $399.99, the LG system sounds better than some systems costing three times as much.
• Connectivity was fast and automatic ... really fast and automatic!

Low Points
• HDMI video pass-through is nice at this price point, but the HDMI ports are 1.4, not 2.0a, so you can't pass full 4K/60p and HDR.
• This system lacks the 360-degree immersion of other, more costly systems.
• The subwoofer doesn't really start to impress until the mid-volume range, and there is no option to increase just the sub level. There is a night mode, but it doesn't add enough "loudness" from the sub for my tastes.
• Wall-mounting is not fully implemented; so, if this is important to you, you might want to explore other options.

Conclusion
Did the LG Sound Bar Flex SJ7 make me smile? Yes! It won't fill a large room, and it won't sound like movie effects are coming from all around you. However, for small to mid-sized rooms, watching movies will be very enjoyable, and this system will look great in any of the flexible configurations you choose. Music is equally satisfying, and the setup was fast and easy. The overall value proposition is hard to beat.

You'll automatically be entered in the HTR Sweepstakes, and get the hottest audio deals directly in your inbox.
Author
Scott Schumer
HomeTheaterReview Product Rating
Value:
Performance:
Overall Rating:
Check Product Price
When you buy through links on our site, we may earn an affiliate commission. Your support is greatly appreciated!