In 2013, LG bought webOS from Hewlett-Packard. In 2014, LG replaced the proprietary smart platform in its networkable TVs with webOS, which is now in use on every new smart LG TV. Updates led to the release of webOS 2.0... 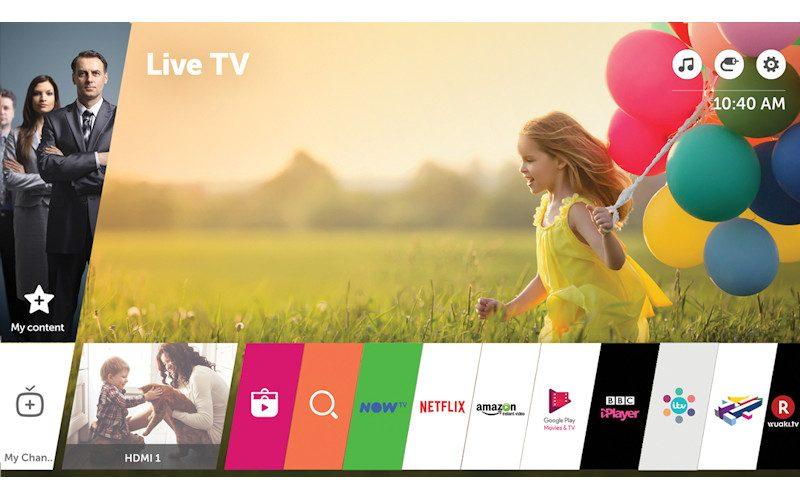 The webOS interface is clean, colorful, and streamlined. Hitting the Home button on the TV remote control pulls up a "channel launcher" along the bottom of the screen while the TV source continues to play full-screen behind it. The main channel launcher includes icons for premium services like Netflix, Amazon Video, YouTube, Hulu Plus, and VUDU. You can scroll across the screen to the right to go deeper into the menu structure to find tools like a Web browser, SmartShare (to access personal media files via USB and DLNA), ScreenShare (to share content from your phone or tablet using Miracast/Intel WiDi), a user guide, and more. webOS intuitively places the most recently used apps to the left where your navigation begins, and the launcher bar also shows other recently viewed inputs/sources, making it very easy to jump between different content options without having to use the remote's Input button. You can rearrange the location of some of the icons in the launcher.

LG's smart platform includes a lot of marquee apps, such as Netflix, Amazon Video, VUDU, Hulu Plus, YouTube, Google Play Movies & TV, M-Go, Spotify, Pandora, iHeartRado, Rhapsody, SiriusXM, and MLB.tv. Notable omissions include HBO Go/Now, Showtime Anytime, TuneIn, sports apps like NBA and NHL, and TV Everywhere apps from major channels like ABC, NBC, ESPN, TNT, etc. The major apps started up pretty quickly (usually loading within about 10 seconds), and I found the platform to be stable and reliable, without a lot of freezes, stutters, or crashes. If your smart TV is a 4K model, LG offers 4K-friendly versions of Netflix, Amazon, M-Go, and YouTube, but not VUDU. There's also no app for the Ultraflix 4K service.

The LG Content Store is where to go to browse for new apps, games, and movie/TV content. The menu is divided into TV Shows, Movies, Premium, Apps & Games, and My Page. Within Apps & Games, you'll find a lot of smaller niche apps, as well as some basic games--you don't get the level of gaming functionality offered in Samsung and Sony smart TVs or in standalone smart boxes like the Nvidia Shield. When browsing content options, if you click on a movie or TV show that interests you and hit Watch Now, you'll get a list of several streaming apps that offer the title. LG offers a free iOS/Android control app called "LG TV Plus" that allows you to control the TV, launch apps, and browse film/TV content directly from your mobile device. However, the app lacks a virtual keyboard for faster text entry. You can connect a Bluetooth or USB keyboard to most smart TV models to allow for faster text entry within the smart TV platform. Also, the Magic Remote that comes with higher-end LG TVs like the 65EF9500 includes a motion-controlled pointer that makes it faster and easier to input text when signing into apps and typing Web addresses. Likewise, the Magic Remote's scroll wheel makes it easier to navigate Web pages and long menu lists. That being said, the Web browser is clunky at best. Pages were slow to load and navigate, and it does not support Flash.

As I mentioned in my 65EF9500 review, it's very easy to integrate control of a cable/satellite set-top box, and the webOS platform includes some helpful tools to make the STB control experience more intuitive. My favorite is the My Channels icon, which lets you add up to eight of your favorite channels to the webOS banner, for quick access. I often used the My Channels tool when I first turned on the TV--selecting a favorite would automatically power up the Dish Hopper and tune to that channel without needing the Dish remote. You can also set up a Scheduler to remind you of shows you want to watch, view LG's program guide for your provider, and get show recommendations. The one issue I encountered was that, in the Recommendations area only, many of my Dish Network channel numbers were wrong; so, if I clicked on a recommended show, I was taken to the wrong place, high up in the channel lineup. One final note about STB control: LG continues to add more buttons (like a full number pad) to the Magic Remote in order to make set-top box control more intuitive, and it's getting close to perfect. The 2016 model will thankfully add STB power, menu, and DVR buttons to make it work even better.

LG's advanced cross-platform search tool is quite effective. Speak a movie or show name into the Magic Remote's microphone, and you'll see a list of services through which that title is available--with the option to filter results by live TV, TV shows, movies, You Tube, games/apps, and Internet. For instance, I said "The Hunger Games" and got a list that included the first three movies and many featurettes. Click into the desired content, hit Watch Now, and you'll see which streaming platform offers the title (Amazon, VUDU, CinemaNow, and Netflix were represented) and how much it costs. The search tool also works for TV programming: say the word football or basketball, for instance, and you'll get a list of upcoming sporting events being shown through your cable/satellite service or a list of movies/TV shows related to that genre. The search tool also works with actor/actress/director names.

LG's SmartShare system lets you access your personal video, music, and photo files stored on a USB flash drive or DLNA-compliant server. I tested playback of files via USB, a Samsung tablet using AllShare, a Windows PC, and a DLNA-compliant Seagate NAS drive. SmartShare is cleanly laid out and generally easy to navigate, and it offers solid file support. For music, supported files include MP3, AAC, WMA, OGG, FLAC, and WAV files, but not AIFF or ALAC. For video, the list includes MP4, M4V, MOV, AVI, WMV, DIVX, and MKV. Playback of my MP4 and M4V movies was reliable, but the system was finicky with my many MOV home videos. Some files would play, others wouldn't.

High Points
• The webOS interface is clean, colorful, fast, and easy to navigate.
• Most of the major video and music streaming services are represented, and the Content Store includes a lot of niche apps and some games.
• The LG system can control your cable/satellite set-top box, with a number of convenient features.
• LG's cross-platform search and recommendation tool works quite well.
• SmartShare allows for USB and DLNA media playback, with good file support.
• The Magic Remote's motion/voice control and scroll wheel further improve the webOS experience.

Low Points
• Some big-name apps are missing, like HBO Now/Go, Showtime Anytime, and most of the TV Everywhere apps.
• The Web browser does not support Flash, and pages were often slow to load and navigate.
• In the Recommended Content area, the system had incorrect channel numbers for Dish Network.
• SmartShare was sometimes finicky with video file playback.
The LG TV Plus control app doesn't have a virtual keyboard, and I don't like that you have to create an LG account (or sign in via Google/Facebook) and provide personal information to access most of the control app's functions.

Comparison & Competition
Most of the big-name TV manufacturers have revamped their smart TV platforms lately, building them around more open operating systems. Samsung's Tizen OS-based platform, which I recently reviewed, is quite similar to webOS in its layout and in features like set-top box control. Samsung has a few more big-name movie/TV apps and more comprehensive gaming options, but LG has Spotify and Rhapsody, as well as a better cross-platform search feature.

Sony has switched to Android TV, which has fewer of the marquee apps at this stage but includes Google Cast technology that makes it very easy to incorporate compatible apps on mobile devices.

Panasonic is using the Firefox OS, and you can get my impressions about it in our review of the TC-60CX800U TV.

Conclusion
As I mentioned, webOS 3.0 is coming soon to 2016 TVs; unfortunately, LG could not confirm by press time if 2015 TVs will be updated to support 3.0. In addition to everything I described above, here is LG's description of the new features that webOS 3.0 will add:

• Channel Plus provides a wide range of high-quality, free over-the-top content from broadcasters and publications in a user-friendly format.

• My Channels and Live Menu have been upgraded with new sub-features to make them more useful to users, such as the ability to register up to 10 favorite channels through the Electronic Program Guide and easily check programming on other favorite channels without having to leave the screen they're enjoying.

• Multi-view allows users to watch two different sources simultaneously - for example, two channels at the same time, or one channel and a Blu-ray movie at the same time.

• Music Player app plays music through the webOS 3.0 TV speakers, even when the TV is off.

• IoTV app allows onscreen control of smart home appliances from LG and other manufactures that are compatible with LG IoTV.

With webOS, LG pretty much ushered in this new era of more open, streamlined smart TV platforms, and webOS 2.0 successfully packs a lot of functionality into a simple interface. It looks as if webOS 3.0 will take that functionality even further in new 2016 TVs, adding smart-home control, split-screen viewing, and an even better Magic Remote.