LG will be revealing its first 4K computer monitors at CES 2014. LG's monitors will be true cinematic 4K, as opposed to the slighty lower Ultra HD offered by its competitors. Two models have been annouced, one 31-inch and another,... 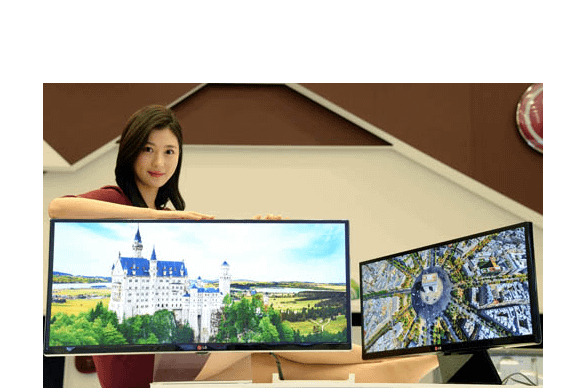 LG will be revealing its first 4K computer monitors at CES 2014. LG's monitors will be true cinematic 4K, as opposed to the slighty lower Ultra HD offered by its competitors. Two models have been annouced, one 31-inch and another, slightly more manageable 24-inch.

Forget about the holidays that are fast approaching! LG Electronics is already looking ahead to 2014 and the first big tech gadget event of the year: the Consumer Electronics Show in January. During CES, LG will debut the company's first 4K PC monitor, the 31-inch "Real 4K" 31MU95.

LG's announcement may not sound terribly interesting since a number of computer makers already sell 4K monitors, including Asus, Dell, and Sharp--all featuring the same 3840-by-2160 resolution.

The difference with LG's first 4K monitor is that it will offer 4096-by-2160 resolution. This is the ultra-wide 4K resolution favored by the film industry versus the so-called Ultra HD version (3840-by-2160) seen on 4K HDTVs.

As you might guess, LG's first foray into 4K monitors will be aimed at professionals in visual industries such as design and film.

Other features, a release date, and pricing weren't announced, but this cinematic 4K monitor will likely be out of reach for most of us. The 31-inch Ultra HD monitors from Asus, Dell, and Sharp are already priced well over $3,000. All those extra pixels for the cinematic flavor of 4K should mean an even higher price tag for LG's PC panel.

Even if we could all afford it, however, the idea of staring at a 31-inch 4K monitor seems a bit excessive unless you're a hard core gamer or graphics professional. Do you really need a 31-inch monitor, after all, just to fill out a spreadsheet, check Facebook, or stream the occasional movie from Netflix?

That may be why Dell has a more reasonably-sized 24-inch Ultra HD PC display for $1,300, and soon plans to roll out a sub-$1,000 28-inch panel. It's still expensive, but at least your home office won't be dominated by an overbearing LCD panel.

With the 3D craze waning and connected smart TVs old hat, electronics makers are desperate for a new selling point that can lure shoppers into A/V showrooms.

With falling TV prices, broadcasters working on 4K compression techniques, and streaming media companies such as Amazon and Netflix getting into the Ultra HD revolution, 4K is almost certainly the next big thing. But we're definitely still wading in the early adopter phase, and it's anybody's guess as to when 4K will go mainstream.