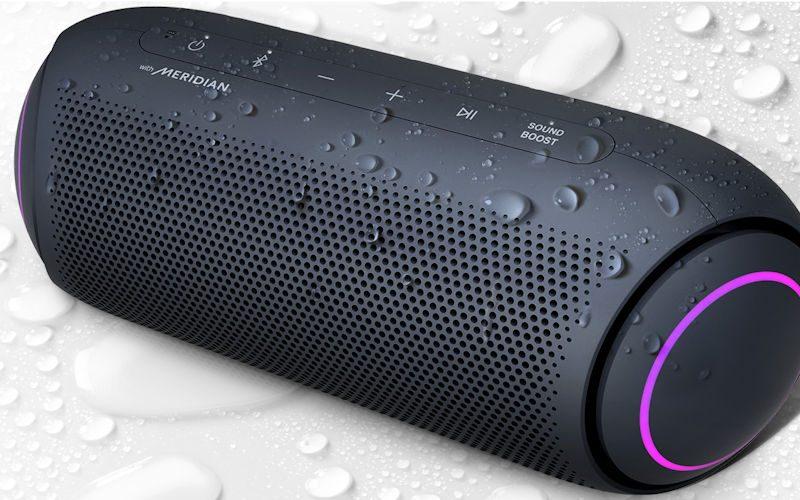 Dennis says the LG XBOOM Go PL7 Portable Bluetooth Speaker knows exactly what it wants to be and makes no apologies for it, making it a fun speaker for those focused more on portability and party atmosphere than purity of tone.

If a soundbar fell deeply in love with one of those light-show/boom-box party speakers popular a few years ago and the two got married, their offspring would likely resemble something akin to LG's $180 XBOOM Go PL7 Portable Bluetooth Speaker with Meridian Audio Technology.

The PL7, as I'll primarily be referring to it in this review – after all, there are only so many times I can type the words "XBOOM Go" without offending my snobbish sensibilities – is a pill-shaped portable Bluetooth speaker measuring 9.7 by 3.9 by 3.9 inches and weighing in at 3.2 pounds. Despite being the largest speaker in its immediate family (which also includes the PL5 and the itty-bitty PL2), the PL7 is portable enough to be carried around pretty much anywhere you want to take it. But despite its portability, it packs in a lot more functionality than you'd get with many on-the-go Bluetooth speakers. In addition to its dual 2.3-inch drivers, the PL7 features a pair of passive radiators, each of which is rimmed by LED lighting. The lighting is configurable to several different modes (including your own custom creation) that pulse along with the music, or it can be turned off completely to minimize distractions. You might choose to do that if, for example, you plan to pair two PL7s with your 2020 LG TV for stereo or even surround sound. That's a thing you can totally do.

A trick that's far more likely to get used by most people is pairing two PL7s together in Dual-mode to enjoy bigger sound on the go. You can even link as many as 100 (not a typo) PL7s together in Multi-mode for the ultimate pool party, assuming you have an Olympic-sized pool in your backyard. As its name implies, the PL7 boasts "Meridian Audio technology." But LG's documentation doesn't make it clear what that means, and I'm always wary of the use of the word "technology" without some specifics. Is it drivers? EQ? Crossovers? (Well, no, it wouldn't be that, since the PL7 has no crossovers.) DSP? Ah ha! That's actually the right answer, although you have to go to Meridian's website, not LG's, to get that answer.

The PL7 also boasts IPX5 water resistance, which means you can't go dunking it in your pool or dropping it in the bathtub along with your rubber ducky, but it will be fine if it gets hit by your sprinkler or you get caught outside in a sudden downpour, or if someone accidentally spills a pitcher of ice water on it. (We recommend keeping the margaritas at a distance, though, since IPX5 certification will do nothing to protect your gear from the caustic combination of Cointreau and Jose Cuervo.)

A trip to LG's Australian website reveals that the PL7 relies on version 5 of the Bluetooth standard, which contributes to its minimal lag and relatively long battery life. SBC and AAC codecs are supported, but aptX sadly isn't. On the upside, a five-hour charge will get you up to 24 hours of playback out of the unit's built-in 7.4V/3900mAh battery, depending on how loud you crank the volume and whether or not you use the party lights built into the passive radiators.

The PL7 is somewhat (although not wholly) unusual among its portable Bluetooth competition in that it's supported by a companion app, which allows you to tweak and customize the lighting (or turn it off), select between BT and aux connectivity, engage the SOUND BOOST sound mode (don't blame me, I'm not the one yelling about it), and perform firmware updates. The app even serves double-duty as a music player for tunes stored on your mobile device. Physical controls come in the form of a power button, Bluetooth paring button, volume up and down buttons, a button to turn SOUND BOOST on or off, and a play/pause button that also functions as a forward skip (with a double-tap, or a backward skip (triple tap). You can also tap the play/pause button to answer/hang up calls, and hold it for two seconds to access the digital voice assistant built into the mobile device and connected via Bluetooth.

Around back, behind a little water-resistant door, you'll find buttons for Dual and Multi-mode connectivity, a button to cycle through or disable the unit's lighting effects, a recessed reset button, a USB-C charging port, a 3.5mm aux audio in, and a USB port that can be used to charge portable devices (only when the speaker is on).

How Does the LG XBOOM Go PL7 Sound?

If I had to pick an adjective-y phrase to describe the sound of the PL7, "party-focused" might be the best fit. Unsurprisingly, given the size of its drivers (although ironically, given its full nomenclature), the word "boom" would fall pretty far down on the list of descriptors I would apply to its sound.

Overall, the sonic signature of the speaker is midrange-heavy, with an emphasis on vocal delivery. That's even truer of the SOUND BOOST mode, which pushes voices farther forward in the mix and gives the speaker quite the kick in terms of overall loudness. But SOUND BOOST so colors the overall tonal balance of music that I much preferred the sound of the speaker with it off.

SOUND BOOST also gives the unit more apparent stereo separation, but you can only expect so much in that department from a speaker measuring less than 10 inches wide. The PL7 does a pretty good job of delivering the phase-shift near the beginning of Beastie Boys' "Hey Ladies," and also conveys the lopsided stereo mix of Jimi Hendrix's "The Wind Cries Mary," but if you're looking for a palpable soundstage or much in the way of imaging, you're barking up the wrong tree here.

The speaker doesn't put out much appreciable energy below 100Hz, and also rolls off pretty steeply above 8kHz (owing largely to its lack of tweeters). Peaks around 200Hz and somewhere between 1,500 and 2,000Hz, along with a few valleys along the way, kept the overall sound balance from being as smooth as I would have liked.

As such, my overall enjoyment of the PL7 largely depended on what type of music I fed it. Yacht-rock playlists sounded fine overall. And I was surprised to find that Toto's "Africa" (an essential inclusion in any yacht-rock collection) didn't cause my desk to rumble, despite the persistent beat. This speaks to a pretty impressively inert cabinet, which is certainly a huge a plus.

Still, not every easy-listening tune sparked joy via the PL7. The delivery of CS&N's "Southern Cross" left me a little cold, mostly due to the fact that Stephen Stills' vocals were just a little too nasally for my tastes. The emphasis on midrange frequencies was just a little too much.

On the other hand, I had a hell of a lot of fun listening to Public Enemy's Fear of a Black Planet and Girl Talk's All Day from beginning to end. Here, the midrange-forward balance didn't put me off in the slightest, and despite the lack of deep bass, the solid thump did the beats justice. And although it embarrasses me to admit as much, I even found myself liking the lighting effects accompanying those beats.

How Does the XBOOM Go PL7 Stack Up Against the Competition?


If portability, durability, and protection from the elements are what you're looking for in a Bluetooth speaker, you should probably compare the LG XBOOM Go PL7 to the Ultimate Ears Megaboom 3. (Seriously, though, what's with all the booming going on in these product names?)

The UE Megaboom 3 offers IP67 ingress protection, which means full dust resistance and protection from immersion in up to a meter (3.3 feet) of water for up to half an hour. Its battery is only rated to deliver up to 20 hours of playback on a charge, but its app allows for custom equalization (five bands). Its "Magic Button" control also allows you to launch playlists from a number of compatible music streaming services. Prices range from $170 to $200 depending on your choice of finish.


If you're looking to save a few bucks, you might also consider the Bose SoundLink Color, at $129. Bose only describes the SoundLink Color as "water resistant," and doesn't publish its IP rating, and provides only get eight hours of playback time. But the SoundLink Color does support stereo (as well as dual-mono) pairing, and sounds surprisingly robust for its size.

The LG XBOOM Go PL7 Portable Bluetooth Speaker with Meridian Audio Technology (deep inhale) seems to know exactly what it wants to be and makes no apologies for it. If you're looking for a party speaker to bring with you to the beach or poolside, and you're more focused on singing along and contributing to the party atmosphere than purity of tone, it's a heck of a lot of fun. Especially once the sun goes down and those pulsating LED lights start to do their thing along with the beat.

It wouldn't make it onto my top-five list of portable Bluetooth speakers, but that certainly doesn't make it a bad speaker, because I'm not the average consumer and suspect I also am not in the PL7's target demographic. But if you're looking for a portable, water-resistant speaker that's easy to pick up and shove in a backpack, and that delivers fun (though not quite accurate) sound, it's certainly worth auditioning.