The Libratone Live is, without a doubt, a stylish product that works well with the intended technologies. However, a pretty package is not the complete story when it comes to the Libratone Live. 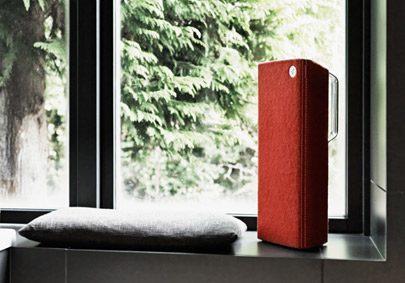 Wireless loudspeakers are becoming very much a hot topic among audiophiles and non-audiophiles alike. For years, we've been promised a wireless audio future, and now it seems it has arrived. A relative newcomer to the scene is Scandinavian manufacturer Libratone. Libratone manufactures and sells direct via its website (and select dealers) a variety of lifestyle-oriented wireless loudspeakers. Libratone's three loudspeaker offerings are all designed to work with Apple's AirPlay technology and are all-in-one solutions, meaning they provide stereo sound from a single cabinet or loudspeaker. Libratone sent me two of its products for review, the Lounge soundbar and the Live AirPlay sound system. The latter is the focus of this review.

The Live is a single cabinet loudspeaker that retails for $699.95, marketed to music lovers who wish to bring music into their lives without having it dominate their living spaces. This means it's not aimed at the critical or enthusiast listener, but instead someone looking for simple, wireless whole-home audio system. The Live itself is large compared to many bookshelf speakers available these days, measuring 18.5 inches tall by nearly eight inches wide and six inches deep. Its triangular shape keeps it from appearing as large as it really is, and its 14-pound weight seems almost light, given its size. The Live can be had in a variety of colors: Slate Grey, Blueberry Black, Blood Orange, Lime Green and Vanilla Beige. The colors come courtesy of the Live's Italian cashmere wool grille, which wraps around the entire loudspeaker, minus a thin area of satin chrome along the back spine, which also plays host to the speaker's handle. That's right, the Live has a handle to aid in carrying it from room to room. Because it's wireless (minus its power cord), you can simply pick it up and move it to whatever room you wish to use for enjoyment of music.

Behind the Italian cashmere wool rests a driver complement of one five-inch bass driver, two three-inch midrange drivers and two one-inch ribbon tweeters (think folded motion, à la MartinLogan or Golden Ear Technology). Each driver is powered by its own amplifier, a 50-watt amplifier for the bass driver and 25-watt amps for the remaining midrange and ribbon tweeters, for a total of 150 watts of power. This gives the Live a reported frequency response of 45-20,000Hz with a maximum output level of 100dB.

Input options are limited to a single 3.5mm audio minijack for analog or optical audio connections. The only other way to connect to the Live is via Apple's AirPlay technology. The Live is compatible with the iPad, iPad 2, new iPad, iPhone 4S, iPhone 4, iPhone 3GS, iPod Touch (second, third and fourth generation) and iOS 4.2- or iTunes 10.1-equipped devices or computers. There is a Libratone App available that assists in making adjustments to the Live's internal DSP via a program Libratone calls FullRoom acoustic technology. The App is only available on iOS devices or via the Apple App store.

Those of you who are diehard Apple enthusiasts should have no problem connecting to and enjoying music via the Live or any Libratone loudspeaker. Those who are PC or Android users would be well-advised to look elsewhere, despite Libratone's claims to the contrary. Yes, you can connect any analog source to the Live via its 3.5mm audio input, but it sort of defeats the purpose of buying a speaker such as the Live in the first place. Therefore, my recommendation for Android or PC users is to maybe turn to other wireless products for their audio enjoyment.

Once connected, the Live is a decent-sounding portable loudspeaker. It is not a speaker I would listen to critically, but as a speaker to fill one's home or living space with background music in a wireless and stylish way, it does the job. Its physical appearance is bound to attract a few oohs and ahhs, which is somewhat the point, if I'm honest, especially when ordered in some of the Live's bolder colors, like Blood Orange. It can play loud, though if you stop to listen to it at above-average levels, you'll quickly notice a cool, leaner sound with an over-accentuated mid-bass trying to substitute for actual bass with a bit of flatness up top. The sound is clean, though not altogether airy. The Live's sound is largely distortion-free, though at higher room-filling volumes, boxy resonances can be heard with more bass-centric tunes. Despite having drivers on all three sides, the Live does not image like a discrete pair of speakers; it's more of an ambient or omni-directional sound.

Read about the high points and low points of the Libratone Live on Page 2.

High Points
• The Libratone Live is a stylish piece of modern design that is bound to win favor with architectural aficionados and fans of the Case Study or Eames aesthetic.
• If you're an Apple enthusiast, the Live is tailor-made for your lifestyle, as it integrates seamlessly with Apple's AirPlay and iTunes software.
• You can easily move and/or set up multiple Live speakers throughout your home and stream music to each via iTunes; effectively giving you a whole-home audio system without costly installation and/or wire management concerns.
• As an ambient or distributed audio loudspeaker, the Live is better than average and, for those who simply want music playing in the background at any given moment, the Live may be the loudspeaker to beat.

Low Points
• The Live, despite having a 3.5mm input, really is a loudspeaker that only appeals to Apple users, meaning those of us with Android devices and/or PCs are going to have to look elsewhere, despite Libratone's claims to the contrary.
• While the Live's grille may be of high-quality Italian cashmere, its physical appearance, at least from a distance of a few feet, looks more felt-ish than wool.
• Once synced to your home network and iTunes, the Live is virtually trouble-free, though its initial link-up process is a bit tedious and not altogether intuitive, despite Libratone's simple five-step manual.
• The sound quality of the Live is average and, at its price, it can be bested by inexpensive traditional loudspeakers. A traditional two-channel or multi-channel setup will require outboard amplifiers, preamps or at best integrated amplifiers.

Competition and Comparison
At just under $700, the Live is far from cheap, given its laser-focused target market. $700 buys you Tekton Design's M-Lore loudspeaker, which isn't powered or wireless, but will best speakers costing five times more. But within its own market sector of wireless loudspeakers, the Live faces stiff competition from the likes of Audio Pro, Paradigm Shift A2, Monster's Clarity HD and Beats Audio. All of the aforementioned options are less or equal in price, yet provide more flexibility for Android and/or PC users.

For more on these speakers and others like them, please visit Home Theater Review's Bookshelf Loudspeaker page.

Conclusion
The Libratone Live is a unique product. As a critical loudspeaker it isn't exceptional, and yet its core audience most likely won't care, or even notice. It's style over substance, and for many, the Live's wireless pedigree and all-Apple interaction will more than make up for its sonic shortcomings. While I'd prefer to see Libratone embrace both Apple and Android enthusiasts equally (what does it cost to add Bluetooth?), it is exclusivity that Apple has promoted so well and that Libratone is attempting to trade upon. Those who are fans of modern furniture or art will no doubt also find the Live appealing. I just wish it was priced more competitively.