In January, Magico will add a new model to its S-Series Mk II speaker line. The new S3 Mk II, which falls in the middle of the lineup between the S1 and S5 models, combines a one-inch diamond-coated Beryllium tweeter... 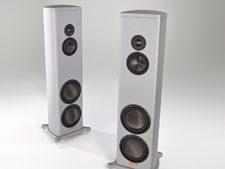 In January, Magico will add a new model to its S-Series Mk II speaker line. The new S3 Mk II, which falls in the middle of the lineup between the S1 and S5 models, combines a one-inch diamond-coated Beryllium tweeter with a six-inch XG Nanographene cone midrange driver and two nine-inch XG Nanographene cone woofers in a well-braced cabinet that's formed from a single piece of extruded aluminum. The S3 Mk II comes in two finishes: the M-Cast textured satin finish for $28,000/pair and the M-Coat high-gloss paint finish for $32,000/pair.

From Magico
Magico is pleased to announce the new S3 Mk II.

The S3 Mk II nestles in between the S1 Mk II and S5 Mk II and features all of the advanced design elements of the S-Series Mk II models, including a new 9-inch bass driver with the lowest measured distortion born from the design and engineering theories applied to the limited-edition, 10th-anniversary M-Project.

Magico's extraordinary midrange reproduction is attained from a proprietary 6-inch driver that also sets a new benchmark for measured performance. The cone material is formulated using Multi-Wall carbon fiber and a layer of XG Nanographene, which when combined is 20 percent lighter and 300 percent stiffer than the previous S-Series cone designs. The purpose-built sub enclosure is made of a proprietary polymer material, which provides an isolated and optimized environment for the midrange driver to operate within.
?
Deep, powerful, and accurate bass frequencies result from two newly designed 9-inch Magico bass drivers that are produced with advanced manufacturing techniques using the same new Multi-Wall carbon, Nanographene cone. The powerful magnet structure controls a 5-inch pure Titanium voice coil that has a half-inch of linear excursion and produces clean, undistorted sound pressure levels up to 112 dB @ 50 Hz/1 meter.

The monocoque enclosure of the S3 Mk II is formed from a single piece of extruded aluminum that is 3/8 inches thick and 12 inches in diameter. The new aluminum top plate is machined into an elegant 3D convex shape to minimize enclosure diffraction and break up vertical standing waves. A massive base plate incorporates a newly designed 4-point outrigger support system that lowers the speaker's center of gravity and increases overall stability, resulting in a lower noise floor and increased dynamic range.