The amount of 4K content is growing steadily, but Jerry Del Colliano believes that 4K TV broadcasts--especially sports--will be the tipping point toward mass adoption. 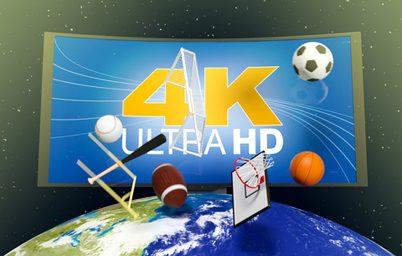 I sit down to write this story as ESPN (the worldwide leader in sports, as they say) just whacked 100 on-camera and online staff in a cost-cutting measure that The Mouse (aka Disney) hopes will make the network closer to profitable. I understand that the cost of broadcasting sports, especially the NFL, is painfully large, but I’ve got a suggestion for the network: take some of those savings and invest in 4K. And do it fast. Disney, often slow to adopt new technologies, should be a leader in 4K content, be it Pixar movies or Monday Night Football. I’d pay for both.

The fact is, it’s pretty hard to buy a good TV today that isn’t 4K. Many of you, our AV enthusiast readers, are likely already rocking 4K TVs and are now hungry for more 4K content to watch on them. Or maybe you want to upgrade to a 4K display but are waiting until content becomes more prevalent. There’s already great-looking UHD/HDR content available through UHD Blu-ray, but these discs come with high prices and in limited (but growing) quantity. At least there’s one 4K disc rental site up and running, which makes good sense for the many users who don’t watch the same movie over and over again, even in 4K. Kaleidescape’s Encore server offers you the ability to download movies in 4K, but the hardware costs many thousands of dollars. There are also 4K streaming options through services like Netflix and Amazon, but the overall AV quality just isn’t as good as you get from an actual disc or K-scape download.

The one source that is the sleeper in the 4K world is broadcast TV. I have been a DirecTV subscriber since day one, and the reason for my conversion was that they had “the hockey package,” which allowed me to watch all of the Philadelphia Flyers games while living 3,000 miles away. DirecTV has been getting between $100 and $200 per month from me for years mainly because of its sports content. Today, that same sports content could entice even more people to take the 4K plunge. DirecTV has grown into a major force in sports, powered by its strong and long-standing relationship with the NFL. Can you imagine NFL games in 4K with HDR? That concept alone would get millions of people back into stores to order shiny, thin 4K sets and potentially even change their TV provider.

A few weeks ago DirecTV offered The Masters in 4K, and it was simply amazing. Golf looks good in 1080p; but, in 4K at one of the world’s most magical places, Augusta National, 4K makes the experience even better. It was pure eye candy. On a daily basis, DirecTV’s channel 104 broadcasts various documentaries and targeted shows so that customers have some 4K content available for free, and the performance is pretty stunning. Still, it’s not a full-time 4K broadcast. Offer all A-list sporting events in 4K, and people are going to take note and start spending.

Major sports leagues keep a careful eye on new technology. A golf buddy of mine who is the CEO of an NFL team checks in with me periodically to see how television technology is progressing. He knows that the biggest competition for selling seats at a game is the experience at home. And he knows that the experience at home is getting better and better–with bigger TVs, better resolution, DVR viewing, fantasy sports tracking channels, and more. A president of an NHL team told me recently that he views technology as the key to luring new, young fans that might not be able to afford tickets today but are tomorrow’s season-ticket holders. These execs know that integrating with phones, devices, TVs, and the Internet is key to the modern sports experience–and that 4K comes along with all of the other technologies.

It’s only a matter of time until there’s more mainstream content in 4K. Google, Amazon, Fox, and many others are all over it. There was a lot of talk about 4K/HDR and the new ATSC 3.0 standard at the recent NAB show, which we’ll cover more in a few weeks. I firmly believe that the tipping point for 4K acceptance will begin when a major sport is delivered in 4K. It would make sense for it to be the NFL, but I’d settle for Arena Football. Once you get a taste of how good your TV can look, you can’t go backwards. The content is coming, and there a lot of players in the game. We just need to be patient, as hard as that is.

What are you watching in 4K? If you haven’t upgraded to 4K yet, what will convince you to make the move? Comment below.