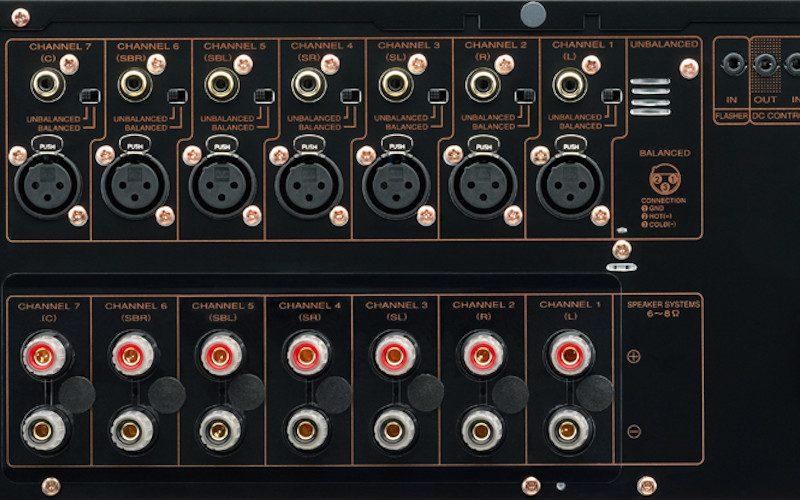 Amplifier Reviews
Published On: March 26, 2014
We May Earn From Purchases Via Links

The MM8077 is Marantz's biggest multi-channel amplifier, with 150 watts of power in each of its seven channels. The MM8077 ($2,399) is designed to complement the new Marantz AV processors, such as the AV8801 that we recently reviewed. The design... 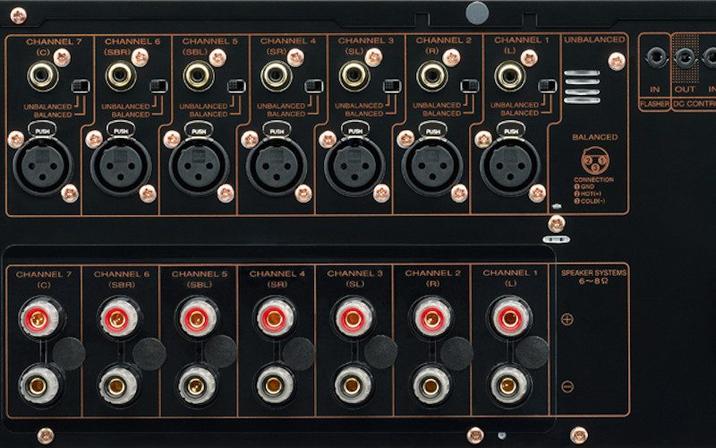 The MM8077 is Marantz's biggest multi-channel amplifier, with 150 watts of power in each of its seven channels. The MM8077 ($2,399) is designed to complement the new Marantz AV processors, such as the AV8801 that we recently reviewed. The design of the MM8077 follows that of the AV8801, with a porthole in the center of the brushed-black front panel and curved sides that make for a clean and attractive style.

While not especially heavy at 39 pounds, the MM8077 feels solid due to its construction, which includes a copper-plated chassis with multi-layer top and bottom panels. A single, large toroidal-transformer-based power supply feeds all seven channels. The MM8077 utilizes a current feedback design, with complementary push-pull circuits, and a Wilson current mirror, which is said to reduce distortion in the high sound range. This amplifier borrows other design traits from Marantz's classic amplifiers, including high-efficiency power transistors that are said to improve transient performance and proprietary "condensers" (capacitors) with 100,000 micro-farads of storage capacity. In short, the circuit design borrows characteristics from Marantz's well-regarded stereo amplifiers in an attempt to bring the musicality that Marantz is known for to this modern seven-channel amplifier, which is capable of 150 watts into each channel into eight ohms (180 watts into six ohms).

All of this power can generate lots of heat, which can damage components unless it is drawn away. The MM8077 uses a combination of passive and active cooling techniques. A large cooling tunnel made out of heatsinks draws heat away like a chimney; when this approach cannot draw away enough heat, temperature sensors engage variable-speed cooling fans to increase cooling. The internal heatsink design keeps the exterior clean and simple. The back panel has balanced and single-ended inputs for each channel, an IEC power plug port, and five small jacks for control functions, including a 12-volt trigger in/out, flasher input, and remote control in/out. If your system cannot work with any of these control options and you do not want to have to walk over to the amplifier to turn it on and off, you are still in luck, as the MM8077 has a signal-sensing feature that can be configured to power up the amplifier when it senses an audio signal.

Click on over to Page 2 for the High Points, Low Points, Competition and Comparison, and Conclusion . . .

When I had the MM8077 in my reference theater system, I watched an old favorite, Heat (DVD, Warner Home Video). The Marantz did a good job of keeping the dialogue clear and easy to understand, while providing plenty of detail and power for the more dynamic scenes, such as the bank robbery shootout. When I listened to Adele's "Set Fire to the Rain" from the album 21 (XL Recordings, Columbia), her voice was reproduced with a balance of precision and natural ease that made for a realistic presentation.

Paula Cole's "Tiger" from the album This Fire (CD, Warner Brothers) is a dynamic track with strong, deep bass. I compared this track through three amplifiers: the Marantz and two more expensive models from Halcro and Krell. The Krell and Halcro amplifiers produced more detailed and solid soundstages and had more impact and control in the bass region, but the Marantz came much closer to the performance levels of the more expensive amplifiers than the large price differential would suggest.

Competition and Comparison
The HomeTheaterReview.com multi-channel amplification page keeps up to date with the multi-channel amplifiers on the market. Some other options include Emotiva's UPA-700 ($499) with 80 watts per channel; this amplifier may be a good choice for more efficient speakers. For systems needing even more channels of amplification, the Onkyo PA-MC5500 1699 offers nine channels. The Wyred 4 Sound MMC Series of amplifiers comes in three-, five-, and seven-channel options ($1,999 for the five-channel version), utilize the ICE amplifier modules and provide a slightly cooler sonic profile.

Conclusion
I used the MM8077 in a couple of systems, with speakers from Wisdom, MartinLogan, and my reference B&W 800 Diamonds. Overall, the Marantz MM8077 performed extremely well, with a sonic character that leaned toward a warmer, fuller sound. I was able to listen to stereo and multi-channel music for hours without any fatigue. The "warm" sonic character adds liquidity and body to the critical midrange and is thankfully balanced to also provide the detail necessary for demanding multi-channel soundtracks. My only caveat is that some difficult-to-drive, full-range speakers may push this amplifier to its limits. I have no problems recommending the MM807 to listeners who are searching for a multi-channel amplifier that is equally at home with both music and movies.