A simpler AVR for simpler rooms, this slim Marantz offerings hits all the right buttons for Andrew Robinson. 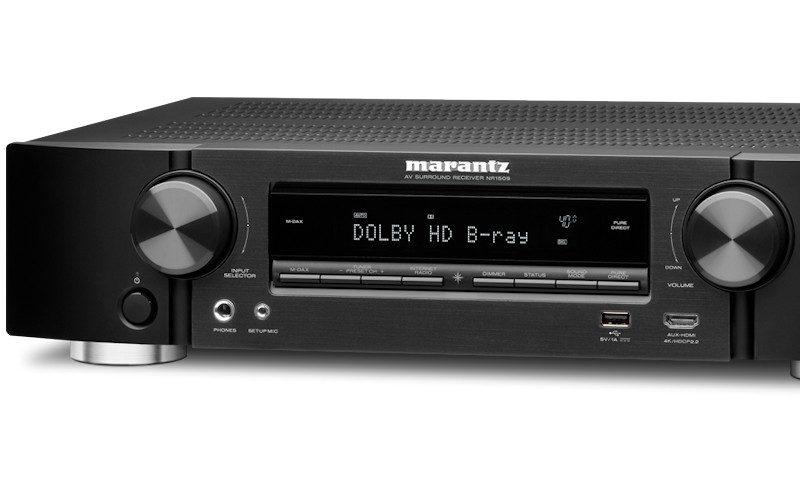 Marantz has, for any number of reasons, stood the test of time as one of the industry's most valued brands. What I love about Marantz and what I feel has always set the brand apart from its competition (its own sister companies included) is its principle of always putting a premium on performance over gimmicks. Its products have historically sounded a little better and lasted a little longer, but rarely had of the latest bells and whistles. Its offerings have also usually cost just a little more. It doesn't take a grand imagination to see why Marantz continues to be a darling among the AV press and consumers alike. So why is it I've never owned a Marantz product? Ever.

Five or so years ago, when I decided to take a giant step back from the AV industry, the product to have was Marantz's latest AV receiver or preamp processor. Seriously, every AV journalist I knew at that time had one, and while it would've been easy for me to have one too, I wanted to be different. Actually, I needed a break, so I didn't have any of 'em, but I digress. Some years later and I have returned to the house I helped to build, and upon my arrival I knew I would need a few items in order to get started. My first request was none other than the Marantz NR1509 AV receiver reviewed here.

Retailing for $549.00, the NR1509 caught my eye for three very distinct reasons: first, it was affordable; second it was a Marantz; and third it was slim. That's right--slim. For an AV receiver, the NR1509 is decidedly small. Packing in all of the pertinent features I want and need, with zero bloat, the NR1509 measures just 17.3 inches wide by 14.5 inches deep and a scant four inches tall--positively tiny by today's AV standards. Its 18-pound weight puts it it in the featherweight category. Still, it packs 50 Watts per channel, has dual subwoofer outputs (not to mention stereo preamp outs), features the latest HDMI connectivity (including HDCP 2.2 support) across all of its six HDMI inputs, and has Audyssey room correction. In other words, the NR1509 has everything a home theater enthusiast actually needs to get by in all but the most demanding of situations. But I'm getting ahead of myself.

The front of the NR1509 is all Marantz, sporting their current aesthetics, which have been with the brand now for almost 10 years. This is not a bad thing, as Marantz continues to make some of the prettier mass-market components you can buy at any price. I especially like the symmetry of the two large dials--one for input and the other volume--that flank the large front panel display. There is a front-mounted headphone jack, as well as an input for the included Audyssey calibration microphone. A single USB and HDMI input round out the front panel connection options.

Around back, and working our way from left to right, you'll spot the NR1509's audio inputs, which include a phono input, as well as three additional unbalanced audio inputs. There are two digital audio input options: a single optical and coaxial. Throw in an AM/FM antenna and a 3.5mm jack for IR in, and and you have the first third of the NR1509's back panel covered. Next to the audio inputs rests the receiver's analog audio outs in the form of two subwoofer outputs and a left and right stereo preamp output, all of which are single-ended. Directly to the right of those you'll find three composite video inputs and one composite video out. Why? Who knows. Above the four legacy video options rests an RCA-style remote in and out, followed by the NR1509's five HDMI inputs and single HDMI monitor out. All of the NR1509's HDMI inputs and outputs are 4K/HDCP 2.2 compatible and feature full 4K/60Hz pass-through at 4:4:4 with HDR (HDR10, Dolby Vision, and--via a firmware update--HLG) and BT.2020 support. Lastly there is the NR1509's five, five-way binding posts, which can accept either bare wire or banana-plug speaker cables, but not spade connectors.

Under the hood the NR1509 boasts 50 Watts per channel across all five of its channels into 8Ω, measured with two channels driven. It supports all the pertinent non-object-based surround sound formats, such as Dolby TrueHD and DTS-HD Master Audio. The NR1509 has the ability to playback high resolution audio formats such as ALAC, FLAC, and WAV lossless, as well as DSD (2.8MHz and 5.6MHz). It utilizes HEOS multi-room audio, which is something you'll also find on Denon products. It's through HEOS that you also gain access to Amazon Alexa functionality. The NR1509 also features Bluetooth, WiFi (2.4/5Ghz support via dual antennas), and Apple AirPlay 2 streaming capability. Throw in Audyssey MultEQ, Dynamic Volume, and Dynamic EQ and you have the NR1509's feature set and capability in a nutshell. For more on the NR1509 list of features and/or specs please visit its product page on Marantz's website.


Connecting the NR1509 to any modern home theater--be it a purpose built one or a media room--is straightforward and simple. My review system consisted of an LG C8 OLED display utilizing the NR1509's ARC and HDMI CEC functionality, a single HDMI source component by way of a Roku Ultra, and a modest speaker system from Davone Audio--specifically their Studio Monitors. The Marantz's internal menus still leave a lot to be desired, in that they're still living in an early 2000's world, whereas Sony's onscreen menus are very 2018. Despite their basic appearance, the NR1509's menus are still very functional and easy to understand and navigate. Plus, once through initial setup, how often do we need to access a receiver's internal menus? In my case, almost never.

Once configured, the Marantz--especially in a system like mine--becomes a multi-channel amplifier with a volume knob, which is just how I like it. I should point out that while the NR1509 has the latest Audyssey room correction software inside, I don't (typically) employ such feature sets as the room I currently have has proven to be relatively good on its own. Call me a purist (or old fashioned), but at this juncture in my audio journey I prefer things au naturel. That being said, in my experience the auto EQ functionality of the current iteration of Audyssey works, and works well. It's even compatible with the relatively new MultEQ Editor App, which adds a level of customization you don't normally get with receivers at the NR1509's price point.

Given that I rely on HDMI CEC, I don't even have to use the Marantz's included remote. The remote, while functional, is a mess of buttons and whatnot that is all but unusable in anything but brightly lit rooms. Regular users of AV receivers will undoubtedly be instantly familiar with the style of remote that is included with the NR1509, so don't be discouraged. I'm just a bit of a remote snob. Honestly, for the type of customer and system I see the NR1509 being aimed at, I expected a far simpler remote control.

So, with all that said, and with a system as simple and straightforward as mine, how does the NR1509 perform? In a word, beautifully. Be it music or movies the Marantz NR1509 is one hell of a capable performer provided your system or room falls within a few parameters. For one, given that the NR1509 has only 50 Watts per channel at its disposal--at most--into 8 Ohms, you'll want to make sure either your speakers are more on the efficient side, say 89dB or better, or your room is on the smaller to medium size. Efficient speakers are easier to drive to satisfying levels on less power, so with a receiver like the NR1509, you're going to get a lot more oomph if you're driving a system comprised of Klipsch speakers over that of say some entry-level Revel speakers. It's not that the NR1509 can't power Revels--it can--it just won't be able to do it with the same gusto as it would an efficient speaker like Klipsch.

Of course, you could add a separate stereo amplifier if your speakers are a bit more power hungry, and then all bets are off. If you do have hard-to-drive speakers, then you'll (likely) get more mileage out of the NR1509 by utilizing it in a small to medium sized room where a little volume will go a lot further.

My Davone Audio Studio monitors at 88dB are right on the limit of what I'd say is recommended with a receiver such as the NR1509. While I had to be a bit more liberal with the NR1509's volume to get my Davone's to dance, the resulting sound was nothing if not entirely pleasing and natural in its presentation. There is a fullness and richness to Marantz's signature sound, one that I find decidedly more composed and mature when compared to the likes of Onkyo/Integra, my old go-to brands. While Onkyo/Integra products often pack in everything and the kitchen sink, their sound can favor dynamics and SPL over finesse and subtlety, which is the opposite of what I experienced from the Marantz. Vocals, be it sung on spoken, are especially pleasing, not to mention natural via the NR1509.

But it's not all butterfly kisses and unicorns. The NR1509 can rock with the best of them, and it does so with ample weight throughout the lower mid-range and upper-bass region, something you don't typically find in mass-market, lower-powered receivers. Action soundtracks, period dramas, and quirky comedies are all serviced well by the Marantz NR1509.

Competition and Comparison
You would think the Marantz NR1509 would have a lot more competition given the industry's obsession with appealing to a younger, most cost-conscious demographic. But alas there really aren't a lot of slim AV receivers that pack quite the same punch (and features) as the NR1509 on the market today.


Denon's HEOS AVR (reviewed here) is one product that, on paper, is a good comparison for the NR1509. Retailing for $599, the HEOS AVR is a slim, lifestyle oriented AVR that looks to be even more streamlined than the Marantz. It possesses the same 50 Watts of power across all five of its channels, so the same loudspeaker concerns are going to be present regardless of which product you choose. It's worth noting, though, that the HEOS AVR lacks room-correction altogether, and its setup and control are entirely app-based.

Yamaha's RX-S602 is another option at $599.95. It possesses a minimal, slim chassis design, with much the same feature set as the Marantz. It claims up to 55 Watts per channel, but lacks the Marantz's second subwoofer output.

Conclusion
The Marantz NR1509 is an AV receiver that I can get behind. It's seemingly tailor-made for an enthusiast like me: someone who is simply looking for a good sounding, easy-to-use solution that can take command of a modest home theater system in the modern age. The fact that it sounds as good as it does, especially in its stereo direct mode, is icing on the cake. The NR1509 really is an easy product to love and a no brainer in earning my recommendation. If you're looking for an AV receiver that just works and sounds brilliant (provided your speakers aren't that power hungry), look no further than the Marantz NR1509.

You'll automatically be entered in the HTR Sweepstakes, and get the hottest audio deals directly in your inbox.
Author
Andrew Robinson
HomeTheaterReview Product Rating
Value:
Performance:
Overall Rating:
Check Product Price
When you buy through links on our site, we may earn an affiliate commission. Your support is greatly appreciated!