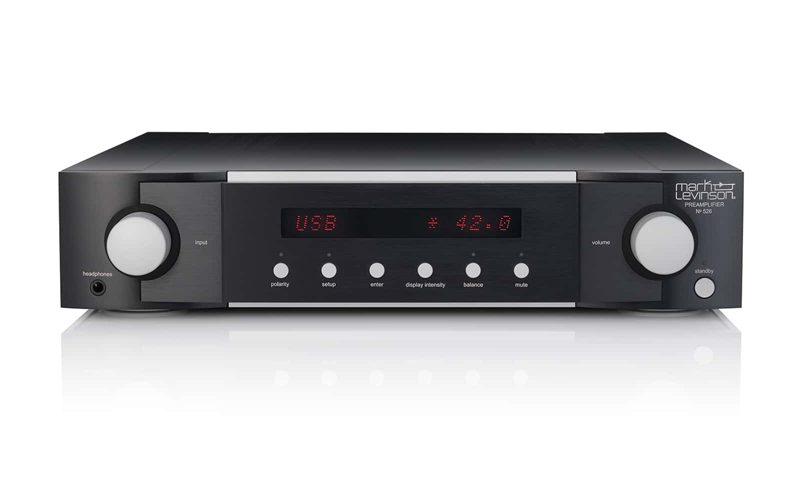 Mark Levinson. The brand represents the pinnacle of automotive and home audio luxury. The company's products are meticulously engineered, and new products are not released on a whim. Levinson products are not for everyone because they can be prohibitively expensive,... 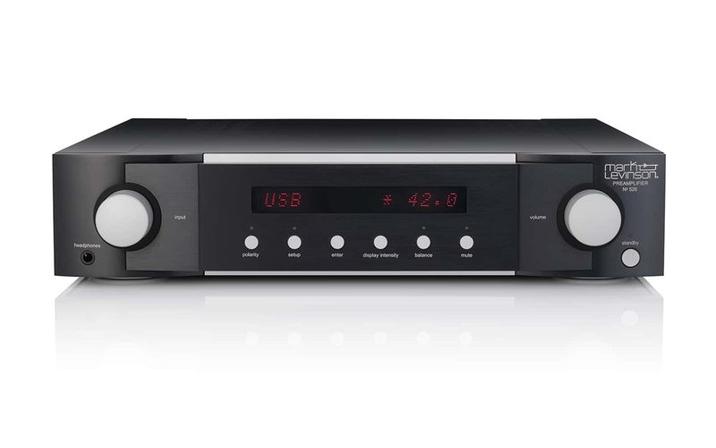 Mark Levinson. The brand represents the pinnacle of automotive and home audio luxury. The company's products are meticulously engineered, and new products are not released on a whim. Levinson products are not for everyone because they can be prohibitively expensive, yet at the same time they are also the envy of most audio enthusiasts. The subject of this review is the company's recently released N° 526 preamplifier/digital-to-analog converter, which costs $20,000.

The N° 526 is a fully balanced preamplifier with a digital-to-analog section that features an ESS SABRE32 chipset. It supports high-resolution formats, including 32-bit/192-kHz PCM and DSD. The front face of the N° 526 features two main knobs (one for input and one for volume), plus six buttons. The button labeled Setup is used to navigate six individual menus: input setup, volume control, power management, display, advanced, and output. A headphone output is also located on the front, while the back panel features a full complement of digital and analog inputs, including phono. As far as inputs go, the N° 526 lacks almost nothing.

I connected my Apple computer to the N° 526's USB port. Using Wireworld cables, I connected the preamp to a Pass Labs XA30.8 Class A amplifier and pair of Focal Sopra N°1 bookshelf speakers. After living with the N° 526 for several months, I was ready to begin my formal evaluation.

Originally released in 1982 and recently released in high resolution on TIDAL, Chaka Khan's Echoes of an Era features an all-star cast that includes Joe Henderson (saxophone), Freddie Hubbard (Trumpet), Chick Corea (piano), Stanley Clarke (bass), and Lenny White (drums). The album includes mostly jazz standards like "All of Me," "I Mean You," and "Take the 'A' Train." The N° 526 reproduced Chaka Khan's voice with drama, sultriness, and smoothness, and her voice was squarely centered in a soundstage of medium width for my Focal Sopra N°1s. Generally speaking, the tonality of every instrument was conveyed with exceptional clarity and with as much separation as I've heard from almost any DAC, including the recently reviewed Bricasti M1. However, more than anything else, it was Hubbard's trumpet solos, characterized by his usual varied embouchure and weight of breath, that kept me fully engaged throughout the album.

I met Mike Stern back in 1991 when I was a student at SUNY Binghamton. I co-ran an organization called The Harper Jazz Project that brought him and Bill Berg to the campus for a concert. His most recent release, Trip (TIDAL, 24/96), is his first since suffering a serious fall in 2016 outside his New York City apartment, which left him with two broken arms and nerve damage in his picking hand. The new album contains no evidence whatsoever that Stern has not fully overcome the adversity of his accident. In fact, the exact opposite is true: the album is a heartfelt expression, chock full of the technical prowess and imaginative phrasing that have made him a six-time Grammy nominee. "Half Crazy" and "Scotch Tape and Glue" contained an electric bop/swing feel that the N° 526 reproduced with absolute excellence and had me leaning in from my listening position. Randy Brecker's trumpet playing on "Blueprint" and especially during the solo on "B-Train" was reminiscent of and strongly influenced by Miles Davis. Lower registers from the bass and drums (David Weckl, in this case) were produced with authority throughout the entire album. Finally, the N° 526 displayed effective and total command of complex passages, never muddying the soundstage or blurring instrument placement.

When the folks from Levinson came to my home to deliver and set up the N° 519 digital audio player and N° 526, we tested the setup with the A Capella version of "Leave It" from the YES 90125 Deluxe Edition album (TIDAL, 16/44.1). During my private evaluation, I also listened to the high-resolution version of 90125 (HD Tracks, 24/192). After releasing Drama in 1980, YES disbanded. They emerged three years later with 90125, which contained a fresh, new, pop/rock sound inspired mostly by the addition of South African guitarist Trevor Rabin. The A Capella version of "Leave It" is a complex track, in which a high-quality DAC is critical to present the proper soundstage, strong vocal separation, and correct vocal tone. The N° 526 delivered here in spades. The deepest vocal tracks (bass and baritone) were standouts, appearing first in the center of the soundstage and later in the left speaker. The quietest passages were delivered with delicate precision, while the breaks between vocals were dead-quiet. The noise floor of the N° 526 was beyond anything I'm capable of hearing.

I concluded my listening test, as I always do, with some hard rock and the debut release from Stone Temple Pilots, Core (TIDAL, 24/96). I have always felt that Core, for its genre of music, was an exceptional recording, possessing in-your-face authority, striking bass, and a massive soundstage. The sound of Core through the N° 526 was larger than life. As I continued to turn up the volume, tracks like "Dead & Bloated" and "Plush" pushed my baby Focals to their limits, yet the sound never broke down one iota. Scott Weiland's vocals on "Creep" were delicate and passionate, backed clearly by Robert DeLeo's vocals in the right channel. I was continually impressed by the N° 526's performance with Core, as it had a distinct analog quality--unlike many DACs that sometimes show their true colors with hard rock music, presenting a brittle sound that can become quickly fatiguing and is simply dreadful.

High Points
• The Mark Levinson N° 526 is a best-in-class sounding DAC. You may find a DAC that you prefer over it, but you will not find one that outperforms it. Furthermore, the N° 526 was never fatiguing, even at high volumes. It excelled with any type or style of music that I could throw its way.
• I really appreciated the precision of the N° 526's volume control, which moves in fine and even increments. It also responds to a quick spin of the volume knob to increase or decrease levels in a flash.
• The N° 526, much like all other Mark Levinson products, is built like a tank. Not many solid-state preamplifiers weigh over 40 pounds.
• The N° 526 is easy to set up and use. The instructions are short, simple, and clear. It took me all of 10 minutes to set up the unit and be on my way.

Low Points
• The Levinson N° 526 lacks MQA and room correction. At this price, it should have both of these features.
• The remote control, which is among the highest quality I've ever held in my hand, lacks a button to display the bit rate.

Comparison and Competition
Much like the recently reviewed Bricasti M1, the Mark Levinson N° 526 is a no-compromise, cost-no-object, price-no-object DAC. It is really hard to discern a measurable difference between the Bricasti M1 and the Levinson N° 526, although, if I had to describe each, I would say that the Levinson is more spacious in its presentation while the Bricasti demonstrates more warmth, with slightly greater analog characteristics. The N° 526 is a flagship Levinson product and sounds even better than the Mark Levinson N° 519 that I recently auditioned.

Conclusion
The Mark Levinson N° 526 is a five-star performer. As one should expect from a Mark Levinson flagship product, there are no sonic compromises here. Admittedly, though, the value proposition is relatively low. The N° 526 carries an eyebrow-raising price tag that, as far as I know, sits only below the Meridian Ultra DAC and EMM Labs DAC2 and is reserved for consumers that can also afford to drink the best vintages of Domaine de la Romanée-Conti, drive a Ferrari, or perhaps even sport an issue of Amazing Fantasy #15 as the centerpiece of their Amazing Spider-man comic collection. As a result, the Mark Levinson N° 526 is arguably not just for the most serious audio hobbyists, but for wealthy connoisseurs of the most luxurious objects that money can buy.

While I could not find anything that the N° 526 doesn't do with absolute best-in-class performance, it does lack some features that I believe are must-haves in this class--such as MQA and onboard EQ or room correction. I was not able to test the analog inputs of the N° 526, but I am certain they perform as flawlessly as the digital aspects of this exquisitely engineered and very fine preamp/DAC. If you want to experience among the best-sounding and best built DACs that money can buy, the N° 526 is worthy of an audition at your local high-end retailer.

You'll automatically be entered in the HTR Sweepstakes, and get the hottest audio deals directly in your inbox.
Subscribe
Connect with
Login
Connect with
4 Comments
Oldest
Newest Most Voted
Inline Feedbacks
View all comments
This is the static ad content. This is just a placeholder for now to get things styled.
Visit Website