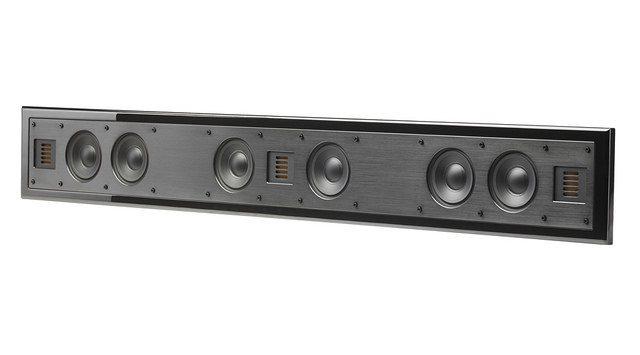 MartinLogan has added five new speakers to its Motion Series: four compact speakers and one three-channel soundbar. The Motion SLM X3 soundbar (shown here) is a passive L/C/R soundbar that features six ultra-slim fiber cone woofers and three Folded Motion tweeters in a high-gloss black cabinet that measures less than two inches deep. The SLM X3 carries an MSRP of $999.95. Details on the new Motion i compact speakers, which range in price from $179.95 to $399.95, can be found on the company's website. All of the new models are available now.

From MartinLogan
MartinLogan is proud to announce five new Motion Series speakers, including four compact speakers and an ultra-slim non-powered three-channel soundbar designed expressly for super-thin televisions. Since its introduction in 2010, the Motion Series has set the standard for unparalleled realism in even the smallest of home theaters or two-channel listening environments. With these newest additions, the Motion Series now starts at under $180 (US retail) per channel and under $1,500 (US retail) for a complete 5.1-channel MartinLogan home theater system (including a MartinLogan Dynamo Series subwoofer)--a truly exceptional price versus performance that makes the Motion Series one of the greatest speaker values available today.

The Motion SLM X3 can be placed just about anywhere for your convenience. With keyhole slots on the speaker's back panel that attach easily to the included wall bracket, you can have the speaker wall-mounted and playing in a matter of minutes. If on-wall mounting is not appealing, the SLM X3 includes "kick-stand" brackets that attach to the back of the cabinet, allowing it to free-stand.

MartinLogan Motion 20i, 15i, and 30i Speakers Reviewed