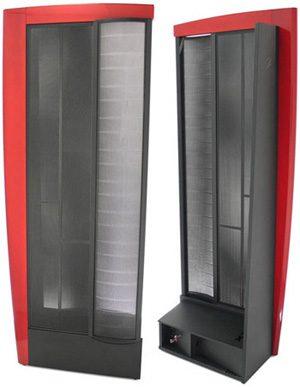 Audio Reviews, Equipment Reviews, Floorstanding Speaker Reviews
Published On: October 13, 2010
We May Earn From Some Purchases Via Affiliate Links

While cut from the same cloth as the CLS model of yore the CLX is an entirely new design. Available in a host of finishes from the companies custom shop these can be suited to any décor. When buying the CLX's expect to need a subwoofer to round out the bottom end. 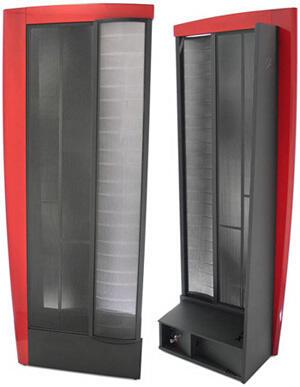 With seemingly everything in the consumer electronics industry growing more Zen with the popularity of flat panel TV’s and on-wall and/or in-wall speakers it seems that the market for a $20,000-plus, six foot tall loudspeaker is somewhat going the way of the dinosaur. That being said, if there was ever a speaker that needed to be made it’s the new CLX from MartinLogan. While some would call the CLX a follow up to MartinLogan’s legendary CLS, they’re wrong other than in the similarity in model name. The old CLS, while brilliant in their own right, was bass shy, highly directional, and power hungry like no other speaker I have ever encountered. The MartinLogan CLX loudspeaker suffers from none of those afflictions. While still visually imposing the CLX can be run (though not recommended) by a receiver with 100 Watts on tap. Its curved diaphragm that handles the high and middle frequencies makes the CLX less directional than its predecessor and the bass, well it’s just staggering. To call the MartinLogan CLX a “follow up to the CLS” is an outright insult to this new and ground-breaking design. The new MartinLogan CLX is all new and better than the CLS could’ve ever hoped to be.

The CLX comes in two finishes, black oak (standard) and aluminum, which is reserved for the first 100 units that MartinLogan are calling their Anniversary Editions. Keep in mind that the anniversary title is going to run you an extra five grand and the difference is almost entirely cosmetic. The CLX boasts a frequency response of 56-23,000 Hz and has a horizontal dispersion of 30 degrees, a huge leap over the old CLS. Its vertical dispersion has also improved to 57 inches making for a much broader, yet still focused sweet spot. The CLX is more sensitive than the old CLS with its 90 dB/2.83 volts/meter rating into six ohms meaning you’ll be able to pair it to a variety of mid level and high end electronics.

In terms of looks the CLX takes some getting used to, okay its odd looking and a bit off putting given MartinLogan’s latest design efforts seen in the Summit and Spire loudspeakers. It does feature some subtle design touches that help “dress” it up a bit like dimmable/defeatable LED lighting that bathes the almost completely transparent CLS panel in a soft blue light. MartinLogan will soon be offering the CLX in a variety of custom finishes via their website but its going to cost you and no prices have yet been set. That being said, I’ve seen photos of the CLX finished with Ferrari red (Rosa forte) lacquer rails and the visual effect is dramatic turning an otherwise awkward looking speaker into one that belongs in a modern art museum.

Competition and Comparison
Be sure to compare MartinLogan’s CLX loudspeakers against their competition by reading our reviews for the Revel Ultima Studio2s, Wilson Audio’s Sophia 2, and MartinLogan’s own Vantage Hybrid loudspeakers. You can find more information available in our Floorstanding Speaker section and on our MartinLogan brand page.

High Points
• The sheer purity to the MartinLogan CLX’s sound is musically addictive and once heard is not easily forgotten or necessarily easy to live without.
• The bass response is so taut, deep and fast its hard to believe its coming from the speaker itself, but rest assured the CLX is a full range speaker and doesn’t mandate the use of a subwoofer unless you are looking for the lowest of lows from your music and movies.
• The new CLS panels on the CLX are a noticeable improvement over the old speaker system in nearly every way.
• Looks aside as beauty is in the eye of the beholder – the MartinLogan CLXs are quite possibly the best sounding speakers for all types of musical tastes available on the market today.
• Customizable trim will change the otherwise average looking CLX into a design statement worthy of prominence in your listening or living room.
• The CLX’s relative efficiency means you won’t be forced to pair them to big ticket, high powered amplifiers unless you are going for extreme performance. In that case, look to Mark Levinson’s No. 436 mono blocks, Halcro’s dm36 or even Krell’s absolutely incredible Evolution power amplifiers. Then just prepare for musical heaven.

Low Points
• These speakers are ugly to my eyes. Ugly, I say. I know they sound really, really good but couldn’t MartinLogan have made them look like their other lines of speakers which have improved drastically over the past five years.
• The CLX’s, even with their relative visual transparency, are visually large and do require a bit of space to sound their best. Do not push them to the back of a room and expect them to shine as they would a few feet from the front wall.
• With a weight of 152 pounds apiece setting up and moving the CLX’s is a job best suited for two people or a team of custom installers.
• The extra five grand for the 25th anniversary addition doesn’t buy you anything other than an esthetic difference and that doesn’t make them look that much better. I think the stock pair represent a better value.

Conclusion
I’ve been a fan of all things MartinLogan for nearly a decade. I’ve even owned the famed CLS and CLS II’s which was nothing short of a loudspeaker love affair. I’ve never followed a speaker’s development more than when I heard rumors of MartinLogan’s return to full range electrostatic prominence, a journey that until this moment has taken years. Well, I’m happy to report the wait was worth every minute for the CLX’s are everything I could’ve hoped for and more. They exceeded my aural expectations in ways I was prepared for having owned the older CLS’. These are not an update, no sir, the CLX are a whole new animal, one that if you’re lucky enough to let them out of the cage, will astound you with their sonic beauty and grace but be able to maul you with their bass. Seriously, I can think of no other speaker I’d rather own right now than the CLX’s if only they were a little better looking, MartinLogan would have a true, perfect 10, in my book.

You'll automatically be entered in the HTR Sweepstakes, and get the hottest audio deals directly in your inbox.
Subscribe
Connect withD
Login
Connect withD
4 Comments
Oldest
Newest Most Voted
Inline Feedbacks
View all comments
HomeTheaterReview Rating
Value:
Performance:
Overall Rating:
This is the static ad content. This is just a placeholder for now to get things styled.
Visit Website