MartinLogan approaches their subwoofers "as musical devices rather than one-trick ponies." It provides a level of control that "makes it ideal for a variety of speaker systems." It excels with both music and movies and can "fill all but the largest rooms with blissful bass an even hang with the costlier competition" 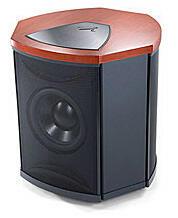 The subwoofer is the unsung hero of any home theater or multi-channel music system.  Sure, we are aware of the subwoofer and often feel its presence, but all too often, once purchased, it sits there in the corner, never to be thought about again.  I would argue that the subwoofer is the heart of any speaker system, for without the bottom octave(s), our music and movie soundtracks would float away.  While we can all agree a subwoofer is important, many subs are built around old principles: get a large driver or two, place them in a large (often square) ported enclosure and tell consumers you can hide them from view.  This often results in boomy, one-note bass that gives subwoofers a bad name or, worse, pushes them out of the mainstream consciousness.

Additional Resources
• Read more MartinLogan Reviews at HomeTheaterReview.com.
ª Read more subwoofer reviews from the likes of Sunfire, Velodyne, PSB, Paradigm and many others…

MartinLogan, better known for their visually stunning hybrid electrostatic loudspeakers, is out to change all that with their new lineup of subwoofers, which not only don’t look the part, but don’t act it, either.  You see, MartinLogan has approached their subs the same way they have approached their speakers, as musical devices rather than one-trick ponies, which is why their subs have been heralded as agile, multi-functional and, of course, musical.  The Depth i looks much like MartinLogan’s flagship sub, the Descent i.  However it is a touch smaller in both scale and weight.  The Depth i features three eight-inch-high excursion aluminum drivers in a sealed, non-resonant asymmetrical enclosure.  The drivers are aligned by what MartinLogan calls BalancedForce, so that the three drivers are positioned  in opposition to one another, allowing their negative forces/vibrations inside the cabinet to effectively cancel each other out, creating less boom and vibration and instead possessing a richer, deeper, more natural bass sound.  The alignment of the drivers is further enhanced by the non-ported nature of the Depth i itself.  Porting can allow for a sub (or speaker) to plunge deeper in the musical range, though it comes at the cost of accuracy, speed, musicality and room interference.  Speaking of room interference or anomalies, the Depth i has many tools at its disposal to combat the issue.  The most noticeable of these is its 25Hz level control.  At the extremes, usually between 20-30Hz, all rooms produce a boost in bass energy.  The Depth i employs a level control that allows the user to effectively reduce these effects by cutting the sub’s output in the problem range.

Beyond the 25Hz control, the Depth i has all of the standard subwoofer controls, such as phase switch, crossover frequency, volume, etc.  However, unlike most subs, the Depth i’s controls are located on the top of the unit itself (under a stylish cover), making them accessible and easy to tune at a moment’s notice.  While most subs have the controls previously mentioned, few have the level and/or options the Depth i has.  For example, the Depth i has four phase settings, as opposed to the usual two you’ll find on most subs.  The Depth i is aptly named, for it truly can plumb the depths of the musical spectrum in all but the largest of rooms, which is where the Descent i may prove more useful.  The Depth i has a frequency response of 20-120Hz, made possible by its internal 350-watt switching power amplifier, which subsequently has a peak power rating of 900 watts.  The Depth i can be connected to your system via line level, LFE and speaker level inputs.  The Depth i has outputs as well, allowing you to effectively chain multiple subs together for better bass output and response if you have only a single LFE or subwoofer output on your processor.

The Depth i comes in four basic finishes, light cherry, dark cherry, black ash and maple, to accentuate and add a touch of style to its slight triangular frame.  Bird’s Eye Maple, Bubinga and Wenge, as well as a number of custom finishes, are optional extras.  The Depth i retails for $1,800 and is available through dealers nationwide, as well as Magnolia Hi-fi stores (many located inside Best Buy stores) and online via Amazon.com.

Read the High Points, The Low Points and The Conclusion on Page 2

• The Depth i’s unique and stylish enclosure is the icing on the cake when you consider its sheer output, speed, punch, musical prowess and daily livability.
• The level of control the Depth i affords you makes it ideal for a variety of speaker systems, not just electrostatic.
• The ability to mate more than one Depth i to your system, regardless of how many sub outs are on your processor or preamp, is hugely beneficial.

Low Points
• Because of the triangular shape and three-driver array, the Depth i is not a sub you can put in a corner or behind a sofa (not that you should do that for any sub), forget about and expect it to sound good.
• The internal amp and drivers can fill most rooms with adequate bass, but you may need to step up the chain for larger rooms.

Conclusion
The Depth i is one of the most complete subwoofers on the market, regardless of your listening tastes, for it excels at both music and movies.  The Depth i can fill all but the largest rooms with blissful bass and can even hang with the costlier competition.  A note on the competition: most subs that best the Depth i (and not by wide margins) are much larger and finished in every color, so long as it’s black.  It is truly remarkable how MartinLogan has packed so many features and performance into such a unique and stylish cabinet, making the Depth i a must-audition subwoofer for any music or movie enthusiast.

Additional Resources
• Read more MartinLogan Reviews at HomeTheaterReview.com.
• Read more subwoofer reviews from the likes of Sunfire, Velodyne, PSB, Paradigm and many others…