The Vantage is a large hybrid electrostatic speaker with a 200 Watt powered eight inch subwoofer built-in. They offer high efficiency and can be custom designed to suit your tastes. 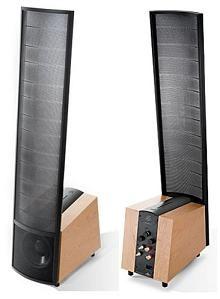 MartinLogan has, for years, been a staple among high-end audiophiles and home theater enthusiasts. In the past few years, MartinLogan has branched out and begun manufacturing high-end solutions at an Everyman price. It began with the Scenario loudspeakers in the mid-'90s, which at the time proved to be hugely successful, albeit a bit limiting in their overall sonic capabilities, which made them suitable for small venues or surround sound speakers. Next came the Aeon, followed by the Clarity. The Aeon proved to be a formidable speaker and became one of MartinLogan most successful and affordable designs, offering much of its big brother's performance without the heavy price tag.

Additional Resources
• Read more floorstanding speaker reviews by the staff at HomeTheaterReview.com.
• Find a subwoofer to beef up the bass of a 2.1 system with the Vantage Hybrids.

Well, MartinLogan is at it again with their new lineup of speakers, the Vantage (reviewed here), Vista and Purity. The Vantage sits in the MartinLogan lineup below the Spire (the Summit replacement), but above the Vista. If the Spire is the new Summit, then the Vantage must be the equivalent to the Ascents of yore. With a retail price of $5,000 a pair, the Vantage is half the price of the old Summits and roughly $3,500 less than the new Spire. The Vantage is visually similar to the Spire, but is a bit smaller, with the woofer enclosure rising up behind the ESL panel for a shallower footprint. The Vantage has MartinLogan's XStat panel, which up until the CLX's arrival was the latest and greatest transducer in MartinLogan's arsenal. While the Vantage is still very good, those wanting the very best electrostatic panel will have to save their pennies and upgrade to the Spire, though in a modest or budget system, I'd argue it would be hard to hear the difference between the Vantage and the Spire.

The Vantage features a 200-watt eight-inch powered aluminum bass driver, which is ported in the rear, giving the Vantage an overall frequency response of 32-23,000Hz. Like the Spire, the Vantage is efficient, with a reported sensitivity of 92dB into a four-ohm load. Since the Vantage is more compact, one has to suppose that MartinLogan is going after consumers with more traditional or moderately-sized listening/viewing rooms. Coupled with the Vantage's relatively good efficiency, this means a powerful receiver or budget separates system should power them nicely.

The Vantage is bi-wireable via MartinLogan's proprietary binding posts that can be found on almost all of their product line, including their statement CLX loudspeakers. The Vantage comes in two base finishes, dark cherry and black ash. Light cherry and maple are optional extras and bring with them an added cost. The Vantage can also be fully customized, courtesy of MartinLogan's own custom shop.

Click to Page 2 for The High Points, The Low Points and The Conclusion.

High Points
• The Vantage possesses a rich, full-range natural sound that is comparable to more expensive MartinLogan offerings at a fraction of the cost.
• The slightly dated XStat panel found on the Vantage is still relevant and hugely musical, even for discerning listeners.
• The powered woofer of the Vantage goes a long way in giving the speaker a true full-range sound, which had been a sort of an Achilles heel when it came to the MartinLogans of old.
• The fit and finish of the Vantage is first-rate and among the best you'll find its price class.
• The ability to customize the Vantage in nearly any finish and/or style is an added bonus, though it brings a higher price tag.

Low Points
• The Vantage, like all traditional MartinLogan speakers, is a dipole design. Combining this with its ported bass section and placement becomes a bit tricky, compared to traditional cone and dome speakers.
• The Vantage must be placed close to an electrical outlet or two in order to power the woofer and give the ESL panel its charge.

Competition and Comparison
Compare MartinLogan's Vantage Hybrid Electrostatic loudspeaker against its competition by reading our reviews for the Revel Performa F52 loudspeaker and the Paradigm Signature S8 V.2 loudspeaker. You can also find more information available in our Floorstanding Speaker section and on our MartinLogan brand page.

Conclusion
With a retail price of around $5,000, depending on the finish, the Vantage hybrid electrostatic from MartinLogan is a relatively affordable solution for consumers craving that classic MartinLogan sound. It sits in the MartinLogan product line much the same as the old Ascent did. The Vantage is far more versatile and lifestyle-friendly, due largely to its compact size and elegant appearance. However, MartinLogan has new ESL panels that are derived from their statement CLX, making the Vantage a bit dated in comparison. Still, this is a phenomenal speaker and a solid buy for consumers with medium-sized rooms and mid-fi systems.
Additional Resources
• Read more floorstanding speaker reviews by the staff at HomeTheaterReview.com.
• Find a subwoofer to beef up the bass of a 2.1 system with the Vantage Hybrids.