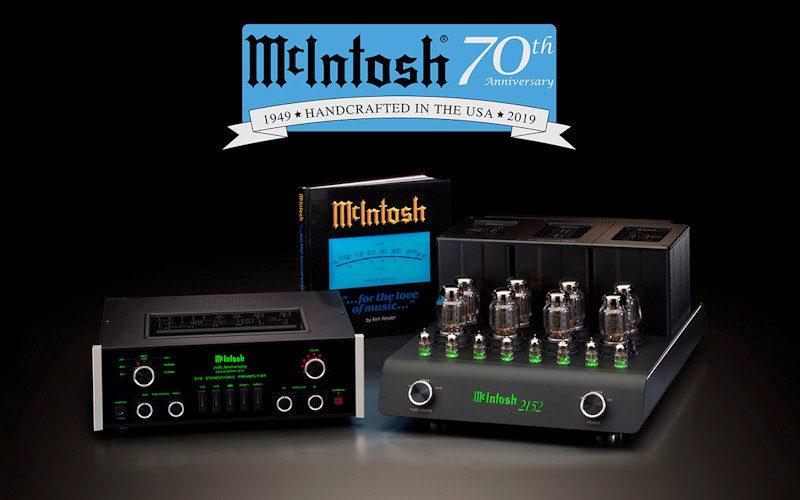 The new anniversary setup is limited to seventy systems, with proceeds going to global humanitarian organization Save the Children.

Few companies in our industry can boast seventy birthdays, so it’s no surprise that McIntosh wants to celebrate such a momentous milestone. And it’s also no surprise, given the exclusivity of the brand, that its 70th Anniversary Limited Edition Commemorative System is mighty exclusive, indeed.

If you don’t manage to nab one of these seventy sets, though, don’t fret; the C70 and MC2152 will also be made available for $7,000 and $15,000, respectively, just without the anniversary bundle bonuses like matching serial numbers and the fancy book.

For more details, see the full press release from McIntosh below:

McIntosh, the global leader in prestigious home entertainment and ultimate-quality audio since its founding by Frank McIntosh – a.k.a. “Mr. Mac” – in 1949, will be celebrating its 70th anniversary in 2019. To commemorate this milestone, McIntosh is pleased to announce a special 70th Anniversary Limited Edition Commemorative System.

For each of these 70 Limited Edition Commemorative Systems sold, McIntosh will donate $1,000 to global humanitarian organization Save the Children. Founded in 1919, Save the Children will also mark a milestone anniversary in 2019 with the celebration of its centennial. In the United States and around the world, they give children a healthy start in life, the opportunity to learn and protection from harm.

“We are honored to be entering our 70th year of fulfilling Mr. Mac’s vision of bringing world class home audio equipment to music and audio lovers everywhere,” said McIntosh President Charlie Randall. “We’ve been fortunate to be able to do what we love to do for so long. We couldn’t have done that without the support of all our customers, dealers and distributors, and I’d like to thank each one of them,” Randall added. “And since we have been so fortunate, we are delighted to be able to give back to those in need via a donation to Save the Children, a truly worthwhile charity dedicated to helping children everywhere.”

“We are grateful to McIntosh for making us a part of their 70th anniversary celebration,” said Save the Children Executive Vice President and Chief Operating Officer Carlos Carrazana. “Next year is also significant for Save the Children as we commemorate our 100th anniversary – a milestone that could not be possible without the support of partnerships like this.”

The MC2152 70th Anniversary Vacuum Tube Amplifier is a 150 Watt per channel stereo amplifier and features a striking new design to honor our seven decades of handcrafting some of the best home audio equipment the world has ever heard. While its design is new, the MC2152 incorporates the lessons we’ve learned and the techniques we’ve invented in our 70 years of audio engineering.

Utilizing our patented Unity Coupled Circuit output transformer technology – the same technology the company was founded on in 1949 – the full 150 Watts can be delivered to almost any pair of speakers regardless if they have 2, 4 or 8 Ohm impedance.

The stunning new design of the MC2152 is highlighted by a bead blasted black anodized aluminum chassis accentuated with matte finish carbon fiber side panels. The front panel showcases a backlit laser cut McIntosh logo flanked by classic McIntosh knobs. The vacuum tubes are covered by a 12-gauge stainless steel wire cage with a black powder coated finish. To the back are the two Unity Coupled Output Transformers with the power transformer centered between them. All three transformers are housed in glass topped extruded enclosures displaying the wiring diagram for each transformer. A 70th Anniversary badge is laser engraved into the top plate of the enclosures.

The MC2152 uses eight KT88 output vacuum tubes plus eight small signal tubes comprised of four 12AX7A and four 12AT7 vacuum tubes; half of the tube complement is assigned to each audio channel. The 12AX7A vacuum tubes are for the Balanced and Input amps, while the 12AT7 tubes are for the Voltage and Driver amps. The LEDs under the eight small signal tubes can be set to three illumination settings: Off (which allows the tubes natural amber glow to be visible), Green or Blue – a new color option unique to the MC2152. Our Sentry Monitor technology monitors the output current and shuts the amplifier off if it ever exceeds safe limits.

On the back are both balanced and unbalanced inputs, along with our patented Solid Cinch speaker binding posts to securely connect your speaker cables, and an input and output for our Power Control technology that will automatically turn other connected McIntosh components on and off. 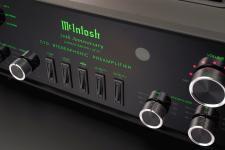 To go along with the MC2152 is the C70 70th Anniversary Vacuum Tube Preamplifier. The C70 harkens back to yesteryear with an all analog design and a retro look. The glass front panel is inscribed with special McIntosh 70th Anniversary lettering.

The C70 features one 12AT7 and five 12AX7A vacuum tubes that are visible through a glass panel on the top cover. All control operations are done via knobs and rocker switches. Modern LED indicators will denote input selection and volume level. The C70 has seven inputs consisting of two balanced inputs, three unbalanced inputs, and one each of Moving Coil and Moving Magnet phono inputs. For outputs, there are two pairs each of balanced and unbalanced connections.

On the front panel, bass and treble tone controls are included and can be adjusted in 2dB increments via rotary knobs. Rotary knobs are also used to adjust the impedance and capacitance for the phono inputs. In addition to controlling the listening level, the volume knob can also adjust the relative volume balance between the left and right audio channels. A ¼” headphone jack powered by our High Drive headphone amplifier is included and features our Headphone Crossfeed Director (HXD) technology. HXD brings added dimension to your music in a natural sounding way but can be turned off depending on your preferences. Five rocker switches are used to control the following functions: tone control on/ off; change between mono and stereo mode; HXD on/off; and to turn the independent output 1 and output 2 on/off.

The C70 sits atop a beautiful polished stainless steel chassis and features the timeless McIntosh black glass front panel, illuminated logo, control knobs, and aluminum end caps. Our Power Control technology is included with four ports that can automatically turn other connected McIntosh components on and off. Data ports are also present and can control basic functions of connected McIntosh source components such as CD Players via the C70’s remote control.

About McIntosh
Founded in 1949, McIntosh Laboratory is known for offering distinguished quality audio products, superior customer service and the ultimate experience in music and film. All McIntosh products are handcrafted at the Binghamton, NY factory by over 150 employees with a passion for music and the McIntosh heritage. McIntosh continues to define the ultimate home entertainment experience for discriminating consumers around the world, with the iconic “McIntosh Blue” Watt Meters globally recognized as a symbol of quality audio. Since its inception, McIntosh has been powering some of the most important moments in music history and pop culture. From President Lyndon Johnson’s inauguration speech to Woodstock to the famous Grateful Dead “Wall of Sound,” McIntosh has not only witnessed history, it has shaped it. With McIntosh, customers have the ability to create their own premium audio experience – and truly live their music. Visit www.mcintoshlabs.com to learn more.

About Save the Children
Save the Children gives children in the United States and around the world a healthy start, the opportunity to learn and protection from harm. We invest in childhood – every day, in times of crisis and for our future. Follow us on Facebook, Instagram and Twitter.