This is an older McIntosh unit that was marketed towards those who needed HDMI video (only) switching but wanted the best analog sound. Those looking for exceptional analog reproduction who don't care about the new audio codecs of Blu-ray may want to read Andrew Robinson's full review here. 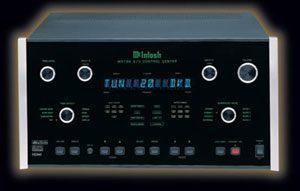 McIntosh Laboratories' MX136 is the company's top of the line audio / video processor that sells for a cool $10,000. McIntosh Laboratories has been an icon in both American manufacturing and the audio world for five decades. Audiophiles have long viewed McIntosh products as being highly desirable and in many circles even collectable. The McIntosh Laboratories brand has become so well known and respected that there is now a coffee table book on the company. Their unique look consists of a black glass panel with silver trim and backlight blue meters. The MX136, while lacking meters, keeps the tradition alive with silver trimmed knobs on a black glass faceplate, the main display window uses blue characters and the status lights are green, a very retro and classy look.

The MX-136 is geared toward consumers who aren't as concerned about the latest codecs found on Blu-ray discs but rather maximizing the performance of the traditional formats and the extensive collections already in existence (although the future codecs can be accommodates as described below.). This decision is made clear by the MX-136's HDMI ports which accept video only. In addition to the HDMI video ports there are 12 analog audio inputs and 11 audio / video inputs, an option internal radio tuner. The audio connections include two pairs of balanced audio connections and a 7.1 analog input. In addition to the slew of audio /video connections, the MX-136 features several control and trigger connections including RS-232 which allows it to be easily integrated into a control system. Features include the ability to custom name inputs, a second zone, night mode, video scaling and transcoding to HDMI and more.

The setup menu can only be accessed by the front panel and all settings are manually set. This is a bit of an abnormality in today's world of automated setup routines and room correction. The MX-136 is focused on obtaining the best possible sound within its chosen arena and this quickly becomes apparent. Many surround processors fail miserably when faced with the task of stereo music reproduction, not so with the McIntosh. The MX-136 can't keep up with McIntosh's dedicated stereo preamplifiers but does much better than most processors and probably a good number of stereo preamplifiers as well. As mentioned above, the MX-136 does not accept audio via HDMI, it must come in via traditional analog and digital inputs. In order to take advantage of the new advanced audio codecs one must use a source with multi-channel analog audio outputs and connect them to the MX-136's 7.1 inputs. Video transcoding was very clean and scaling was generally good with just a bit of softness and a few artifacts.

High Points
• There will be great pride of ownership with this product, as it is very well constructed while being simple and elegant in appearance.
• The MX-136 was able to accommodate a large number of traditional sources.
• Stereo performance was exceptionally good for a surround sound processor. Compare this McIntosh preamp favorably with stereo-only audiophile preamps costing thousands of dollars.

Low Points
• The McIntosh MX136 cannot accept audio via HDMI forcing the user to use additional cables.
• The MX-136 cannot support the new lossless DTS or Dolby Digital codecs except through its 7.1 analog inputs.
• Setup menu can only be accessed from the front panel and is a bit clunky.

Conclusion
The MX-136 is a stellar performer for reproducing music. If you are contemplating a setup that uses the same processor for both movies and music, especially stereo, the MX-136 is a must audition component. The McIntosh was extremely easy to use once it is setup. The front panel proved to be extremely informative and simple to read. The unit had no problem detecting traditional surround codecs and implementing the proper mode. The McIntosh had extremely low background noise which let the details come through vibrantly. The careful attention to performance ensured that the details were not only noticed but that they were accurate as well. Rest assured that video, the other half of an audio/video processor, was not ignored. The McIntosh did a reliable and unremarkable (this is good) good transcoding analog signals to digital. They simply came out the same way they came in, just in a different format. Scaling was also performed well although not quite as good as with the better stand alone processors.

All in all, the McIntosh is a solid performer. It is not for those who demand every one of the latest processing modes and bells and whistles but rather those who seek quality and simplicity. The build quality and performance of the unit is excellent and its operation is simple. Highly recommended for the traditionalist.