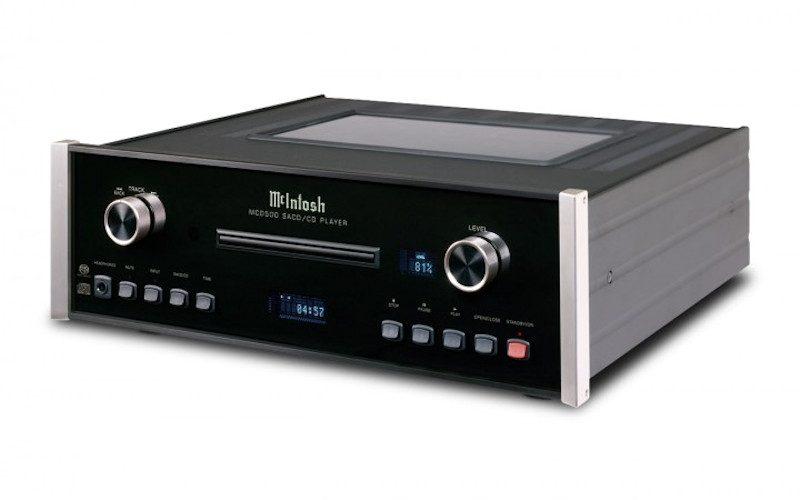 Brian Kahn unboxes the McIntosh MCD500 SACD/CD player and puts it to the test. What he discovered as he continued to attempt different sources, is that this player had several surprises in store for him.

McIntosh Laboratories' newest audio disc player is the MCD500 SACD/CD player. Upon taking the 28 pound player out of its box it was immediately apparent that this player was a solid, well built unit keeping in the tradition of McIntosh products. The MCD500's aesthetics are pure classic McIntosh with a black glass front panel backlit with a combination of Fiber Optic Light Diffusers and LEDs and flanked with extruded aluminum side panels.

Underneath the traditional exterior is a thoroughly modern SACD/CD chassis. In fact, the MCD500 was one of, if not the first, player to use the ESS Sabre Reference 9008 DAC. The MCD500 uses eight of these 24bit / 192 kHz DACS in a quad balanced parallel configuration. Discs are placed into a die cast transport to reduces resonances and read errors. CD's are read into a memory buffer at twice normal speed to further increase accuracy. The buffer then feeds the aforementioned DACs. The MCD500 is a DAC as well as a SACD/CD player with coax and toslink digital inputs that, according to the owner's manual accept CD signals (16 bit /44.1 kHz) only. Conversely, the MCD500 also has digital outputs if you want to use it as a transport only for CDs. Sorry, but SACDs are output in analog only. I do not think the digital outputs will be used much as the DACs and analog section are excellent.

The R-core transformer based power supply helps ensure audiophile grade analog performance which can be accessed from either fixed or variable, single ended or balanced outputs. I found the performance of the balanced outputs to be noticeably better than the single ended outputs with both the fixed and variable outputs. The variable outputs sounded extremely clean and did a good job driving McIntosh amplifiers but I preferred the sound of the fixed outputs feeding a preamplifier. The sound with the fixed outputs and preamplifier was not any more detailed or transparent than with the variable outputs feeding the amplifiers directly but it was more balanced and imaged better.

Read about the high points and the low points of the MCD500 on Page 2.

High Points
• The variable output will provide you with the option of omitting the preamplifier from your system. This will allow those on a budget to take additional time building their system.
• Audio performance was excellent. While SACD playback sounded better than CD, CD performance was elevated close to that of SACD and both were excellent.
• The MCD500's digital inputs allow the use of unit's DACs and analog section with other digital sources, such as a music server.

Low Points
• The MCD500 does not provide multi-channel SACD playback and the SACD signals cannot be output digitally for external multi-channel decoding.
• According to McIntosh, the digital input limited to 16 bit / 44.1 kHz signals. I will note that I was able to feed the MCD500 24 bit / 96 kHz signals and it played them.

Conclusion
The MCD500 provides excellent audio performance coupled with undeniably solid build quality. Using the player it always felt like a premium quality product, everything from the aesthetics, build quality to user interface was well polished. The flexibility of digital and variable outputs allows the MCD500 to serve multiple roles in a two channel system. At $6,500 the MCD500 faces stiff competition. If you need a player/DAC combination that can handle high resolution audio files you will need to try the unit in your system to make sure it can accept and process the signals you wish to feed it.

I found the McIntosh's performance to be superb. Soundstages were large with individual instruments solidly placed. Individual images were well defined and in large scale or frenetic paced pieces the individual components remained distinct. The attack, or leading edge of notes was not as quick as the fastest and most detailed players/DACs I have heard, but the overall sound was coherent, well balanced and most of all musical. I found myself engaged in lengthy listening sessions which drew me into the music and never left me fatigued.

There are lots of premium players on the market; several are in the same price range as the McIntosh MCD500. Each piece has its strengths. The McIntosh's strength can best be summed up in that it provides a high-level, balanced, sensuous experience, pleasing the senses of touch, vision and most important sound.

You'll automatically be entered in the HTR Sweepstakes, and get the hottest audio deals directly in your inbox.
Subscribe
Connect withD
Login
Connect withD
0 Comments
Inline Feedbacks
View all comments
Author
Brian Kahn
HomeTheaterReview Product Rating
Value:
Performance:
Overall Rating:
When you buy through links on our site, we may earn an affiliate commission. Your support is greatly appreciated!
This is the static ad content. This is just a placeholder for now to get things styled.
Visit Website