Meridian has come to embody the high-end audiophile and home theater space so it's no surprise that their first projector would do the same. The 810 is Meridian's first foray into the ultra-exclusive 4K projector club and while it may have started life as a JVC design the wizards at Meridian have taken the 810 to a whole new level.
TwitterFacebookEmailFlipboardPinterestPocketReddit 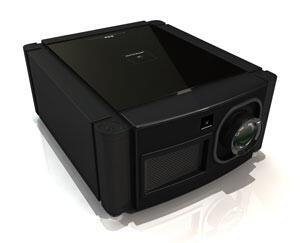 When one hears about 4K digital projectors today, it is almost always in the context of a commercial movie theater, with a screen as big as 85 feet wide and seating for 285 people or more. But Meridian’s Bob Stuart, creator of the world’s first all-digital multi-channel audio playback system (from source to speakers), is banking that his new 810 Reference Video System, a three-chip D-ILA (Digital Image Light Amplifier), featuring the new benchmark for projector resolutions, 4,096 x 2,400P (a whopping 9,830,400 pixels), will be leading the home theater market into a new 4K era. Stuart has ingeniously taken JVC’s newest 4K projector engine (DLA-SH4K) as a foundation for his new home theater picture standard. The JVC is designed primarily for aerospace, government and commercial use, but uses only the center of each panel. The sweet spot is a 16:9 masked-down area.

However, Stuart has chosen to utilize the entire panel, which produces a 17:10 aspect ratio of nearly 10 mega-pixels. That’s over two million more pixels than the Sony SRX-R220 4K projector. Combined with an included anamorphic (Scope) lens, this projector produces the highest 2.39:1 native resolution of any projector on the planet. For near-perfect color rendering, a special 4,000 ANSI Lumen Xenon arc bulb (similar to those used in the Sony, Barco and Christie cinema projectors) is used to illuminate screens of up to 24 feet wide (given an industry standard of 16 foot-Lamberts) with a (reported) 10,000:1 contrast ratio. There are four different motorized lens options, covering a range from 1:1 to 5:1 screen widths. When the anamorphic (Scope) lens is engaged, it allows widescreen to be truly wide (2.39:1), in comparison to normal HDTV (1.78:1) sources, while remaining the same height. The completely unique Meridian 810 companion scaler, which is included with the projector, utilizes Marvell’s QDEO 36-bit video processing chips, which makes signals from 480i up to 1080P (and even 2K) at 24, 30, 50 and 60 fps startlingly noise- and artifact-free. The availability of XYZ (xvYCC) extended color space (as would befit a projector of this digital 4K cinema caliber) also allows for the inclusion of HDTV Rec. 709 color space and NTSC Rec. 601 color space memories, so any source you can throw at this projector will come out looking its absolute best. The price set by Meridian for this powerhouse is a humbling $185,000 MSRP.
When you look at a wide range of different sources on bigger and bigger screen sizes, beginning at over 10 feet (like my Stewart 18-foot x 10-foot 1.0 gain Snowmatte Laboratory Screen), it quickly becomes clear that 480i DVDs have their severe limitations, especially in the area of resolution (720 x 480i). HDTV cable and satellite services offer more resolution (up to 1,920 x 1,080i), but frequently curtail ultimate picture quality through aggressive compression. This is to done to allow for yet more and more channels. Even HDTV Internet downloads can conserve on bandwidth, resulting in images that can contain macro and micro blocking, mosquito noise and edge enhancement halos. It is only with HD DVD and Blu-ray (1,920 x 1,080P) that we finally see consumer sources that are worthy of comparison directly to their commercial cinema counterparts, such as DLP Cinema or film itself. Amazingly, the Meridian 810 Reference Video System is the first projector (professional or consumer, excluding Faroudja) to address these variations of source picture quality through the use of a companion scaler. The scaler makes every possible attempt to extract, equalize and enhance any of these varied sources and produce them at their very finest, in real time. I tell you that no matter how many times you may have seen a particular Blu-ray, HD DVD, DVD or HDTV movie or TV program, and regardless of equipment used, the Meridian 810 Projector and Scaler will elevate these sources to a new and previously only hinted-at level of transparency and immediacy. DVDs wind up looking like very good HDTV, HDTV looks like really good HD-DVD or Blu-ray, and the last two look better than 2K professional cinema. The performance is revelatory. As this projector has been designed to offer intergalactic picture quality without requiring a separate, dedicated projection booth (as is the case with every other professional 2k or 4k projector), it makes for a much easier installation than one might initially expect from this somewhat large, black and smooth-surfaced 4K projector engine. Note: the projector cannot be inverted to hang from a bracket off the ceiling. It must be located right-side-up on a table, shelf, or slightly tilted in the case of a rear-projection orientation. The included remote control allows for adjustment of various picture parameters such as input selection, contrast, brightness, color, sharpness, noise reduction, etc. from the comfort of your easy chair, just as with any other front projector, only this time, it’s 4K. And because it’s 4K, and D-ILA, the pixels are very well-hidden, even with your nose one foot from the screen. The inclusion of the anamorphic Scope lens option only enhances an already hugely successful product by allowing for widescreen movies to fill a much wider screen area, just like at a movie theatre. Both Scope and HDTV formats are presented at the same height but different widths, preserving the immersive qualities that are a hallmark of this type of widescreen cinematography. In the process, regular HDTV and Scope Widescreen movies are scaled (thanks to Marvell) to utilize the entire panel of the unmasked three-chip D-ILA engine, offering previously unseen near-10 mega-pixel resolution and image clarity from any available electronic source.

But how does such a powerhouse respond to real world comparisons? Let’s consider resolution for a moment. The movie The Fifth Element has been released in many formats since its theatrical release in 35mm in the spring of 1997. Beginning with the first issued DVD, and continuing through the various super-bit-mapped and collector’s remasterings to the initial Blu-Ray release and its subsequent remastering, each version has always had its own charms and limitations. However, with the Meridian 810 system, each was treated as though it were royalty. This gave even the first DVD issue a film-like detail and subtlety of color that in no way looked soft or flat. In fact, each of the DVD versions was just fine on its own, only lacking in comparison to the next better version. When comparing the first Blu-ray issue to the remastered version from a year later, even I was amazed to witness a continued improvement in depth and resolution. The Meridian 810 Reference Video System was easily able to handle these varying sources, maximizing their respective strengths while neatly and precisely removing any and just about all artifacts and distortion. Other areas of improvement include expanded colors, improved depth of field, rich and detailed blacks, wide contrast ratio and bright image. Finally, there is a professional projector designed to create the ultimate in home theater images, and that has the power of Meridian behind it. Although expensive, this light engine, combined with its dedicated external scaler, creates one of the finest images yet seen at home or in any digital cinema.

Read about the high points and the low points of the Meridian 810 on Page 2.

Low Points
• The projector will only operate
with the included scaler, so there is no upgrade path (and there is not
likely to be any, either).
• The unit requires four days of onsite
calibration after installation in order to realize the full image
potential of the new 4K chip-set.
• Maximum screen size is limited
to 24 feet by the choice of a single 4,000 ANSI Lumen bulb (16
foot-Lamberts DCI, SMPTE, AMPAS cinema standards).
• Ceiling mounting is not possible, as the projector cannot be inverted.

Conclusion
If you are serious about your home
theater, you’re going to have to acknowledge the Meridian 810 as the
current leader of digital cinema projection, at home or a medium-sized
screening room. When it comes to performance, the 810 is clearly the
leader of the pack, offering unprecedented contrast ratio, detail,
color fidelity, ease of use and all-out transparent performance
(particularly with Blu-Ray and HD-DVD sources), even in comparison to
all the other 2K and 4K professional projectors on the market from such
manufacturers as Sony, Barco, Christie and NEC. The Meridian 810
Reference Video System can only be exceeded by 70mm film under
laboratory conditions, which might offer better fidelity in some ways,
but not in others. It represents a milestone in the history of digital
projectors and it is particularly noteworthy for being the first 4K
projectors designed specifically for home theater. If you can afford
it, you can’t possible miss with this outstanding projection system.

You'll automatically be entered in the HTR Sweepstakes, and get the hottest audio deals directly in your inbox.
0 0 votes
Article Rating
Subscribe
Connect withD
Login
Connect withD
0 Comments
Inline Feedbacks
View all comments
Author
Jeremy R. Kipnis
HomeTheaterReview Product Rating
Value:
Performance:
Overall Rating:
When you buy through links on our site, we may earn an affiliate commission. Your support is greatly appreciated!
This is the static ad content. This is just a placeholder for now to get things styled.
Visit Website