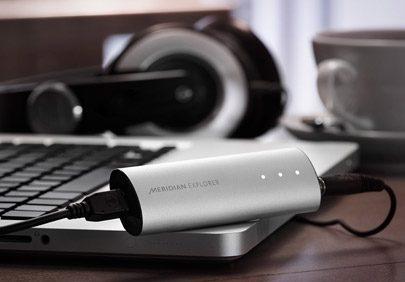 Audio Reviews, Digital to Analog Converter Reviews, Equipment Reviews
Published On: February 11, 2013
We May Earn From Some Purchases Via Affiliate Links

Meridian Audio is widely seen as a luxury A/V brand. So the company's decision to make the Explorer USB DAC is somewhat surprising. Andrew Robinson takes the Explorer for a spin to see what it has to offer. 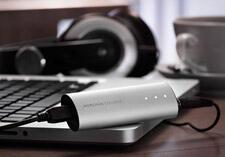 Meridianhas been a champion of all things digital since its inception. Over the years, the company has come to market with arguably some of the finest digital components the industry has ever seen, though admittedly that level of performance has often come at a price. A steep price. But as time and technology change, so does Meridian, and its newest digital creation, the USB-powered DAC dubbed Explorer, is not only an example of Meridian’s digital focus, but also the company’s commitment to future growth.

Retailing for $299, the Explorer is Meridian’s first-ever headphone-oriented product, and also the company’s first portable one (not counting control apps, of course). Measuring a mere four inches long by one-and-a-quarter inches wide and less than an inch deep, the Explorer is pocket-sized. Its weight of only one-and-three-quarter ounces isn’t going to snap any spines, either. The Explorer is a smooth, nearly cylindrical piece of kit, clad in a sort of heather grey aluminum. On one end, you’ll find its mini-USB (type B) input and, on the other end, a 3.5mm headphone jack, as well as a 3.5mm analog/digital combo jack (adapter required but not included). The mini-Toslink optical digital out is capable of both 96kHz output and two-channel analog out (fixed, 2v RMS). The variable-level headphone out is capable of powering cans compatible with its 130mw, 16-ohm output. Power, as well as input signal, is obtained via the Explorer’s USB connection.

The Explorer is both PC and Mac compatible, though a driver is required for PCs before the Explorer will work with them, whereas with Apple computers, it is plug-n-play. The three white lights atop the Explorer indicate connection status, as well as output stream. Inside the Explorer is an asynchronous USB device with USB 2.0 HS 480Mb/s compliance. Meridian states that the Explorer boasts the highest native conversion capability at 24bit/192kHz, as well as possessing separate low-jitter crystal oscillators for both 44 and 48K sample rates. Finally, the Explorer features a six-layer circuit board with audiophile-grade parts throughout, which is hand-assembled by Meridian workers in the company’s U.K. factory.

Getting the Explorer up and running is pretty simple, especially for Apple users, though the process of downloading a driver and installing it to your PC is hardly what I’d label difficult. I tested the Explorer on both a MacBook and a Windows 7 Samsung laptop, with stellar if not identical results. I used a variety of different headphones during my evaluation: Bowers & Wilkins’ P5 and P3 headphones, as well as Focal’s new Spirit Ones. I ultimately sided with my trusty P5s, as I felt the combination to be a terrific fit.

So how does the Explorer compare, or, better yet, enhance one’s computer-based music experience? Compared to simply running my headphones from the headphone jack on either laptop, the differences between the jacks and the Explorer are not what I would term subtle. First off, there is a definite boost in gain, which is to be expected. However, along with a slight increase in overall volume, you gain a more effortless portrayal of the music, as your headphones simply do not have to work as hard in order to bring you your favorite tunes. This in turn means that dynamics across the board also improve, as does the sense of space. Via just the headphone jack of my laptops, music was (largely) a two-dimensional affair. With the Explorer, there was much more dimension present. Other notable improvements included firmness in bass, as well as better bass articulation. Midrange clarity and weight also improved. High frequencies were among the most impressive, as they saw the largest gains in clarity and weight, as well as air. Via my laptop’s headphone jacks, I heard when a cymbal was hit, which is to say there was a noise that resembled what I expect a cymbal being struck by a stick to sound like. Through the Explorer, that same “note” sounded not only more natural but more organic, in that the air, and thus the sound before, during and after the initial strike, was audible, as opposed to stopping dead as soon as the initial impact occurred. Gone was the “tizzy” quality associated with poor digital recordings, replaced instead with a sort of warm, supple aural texture. Just to be clear, I carried out all of my listening tests via source material that was either purchased via iTunes or encoded in MP3 (192 or 320kbps) and played back via iTunes or Media Player. In other words, it did all this with the worst the music industry has to offer, and still the Explorer shined. It also didn’t seem picky about genre. I played everything from Justin Bieber to Mapleshade and came away impressed each time, even if I didn’t wholly enjoy the musical selection itself.

Read about the high points and low points of the Meridian Explore USB DAC on Page 2. 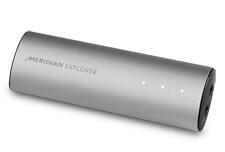 High Points
The Explorer is a well-crafted, well-built portable USB DAC that appears capable of withstanding the rigors of travel and/or hours of on-the-go use.
The Explorer comes with a convenient travel pouch that holds both the unit and its short USB cable.
Mac enthusiasts will have an easier initial experience with the Explorer, but it is compatible with PCs, too – you just have to download a driver first. Once downloaded, the Explorer is 100 percent plug-n-play.
The boost in gain and also sound quality is not what I would describe as subtle. While it may not have enough juice to power inefficient headphones, most modern cans should pair well with the Explorer, resulting in improved bass response, midrange liquidity and high-frequency composure. Do the Explorer’s capabilities and claims ring true? Yes, they do.
You can even utilize the Explorer in your main stereo rig by running it between your computer and preamp or AV preamp/receiver, though admittedly the Explorer is aimed at the portable or personal audio market.

Low Points
Because the Explorer is not 100 percent plug-n-play with PCs, it is possible you could have a setting elsewhere in your system that could cause for some initial setup issues. This is not the fault of the Explorer itself, but rather in the settings of your computer system. Apple isn’t immune to this, either, though I didn’t encounter such a hiccup via my MacBook, so any implied issue is conjecture.
The included USB cable may prove to be a little short for some, in which case you will have to spring for the cost of acquiring a longer miniUSB cable.

Competition and Comparisons
There are a number of portable or small-ish USB-based DACs on the market today. Notable competitors include High Resolution Technologies Music Streamer ($99) and Audioquest’s new Dragonfly ($249). I have not spent a lot of time with either one, so I can’t comment as to how they directly compare to the Explorer in terms of overall sound quality. Suffice to say, there are other options available in the USB DAC space. For more on these great DACs, as well as others like them, please visit Home Theater Review’s DAC page.

Conclusion
At $299, Meridian’s new Explorer USB powered DAC isn’t cheap among ot
her similarly equipped and/or portable DACs, but I feel its price can be justified once its capabilities are heard. I threw arguably the worst our modern music ecosystem has to offer at the Explorer and, rather than then be shown the error of my ways and asked to leave, the Explorer not only made the best of its bad situation, but made it enjoyable. If I were one to listen to headphones more regularly, I would definitely not want to go back to running cans bone stock from a headphone jack, as the improvements provided by the Explorer were just that good.