A recent study by The NDP Group found that 55 percent of soundbar owners use the product for music and other audio-only content, in addition to using it for TV watching. This is due in large part to the addition... 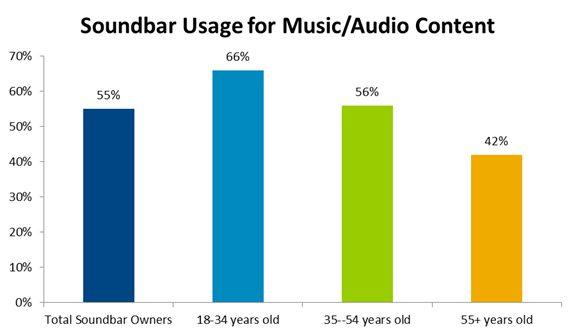 A recent study by The NDP Group found that 55 percent of soundbar owners use the product for music and other audio-only content, in addition to using it for TV watching. This is due in large part to the addition of features like Bluetooth, which allow for easy streaming of audio from portable devices. The trend is especially true with millennials, two-thirds of whom use a soundbar to listen to music/audio content aside from the TV. The study also found that millennials, collectively, spend more than $300 million yearly on soundbars.

From NPD Group
Soundbars aren't just being used as a TV accessory anymore. According to The NPD Group's Soundbar Ownership and Usage Study, 55 percent of consumers use their soundbar for music or other audio-related content, like podcasts and radio, in addition to using it while they watch TV.

The ability to connect and stream to soundbars from portable devices has given consumers new options. More than one-third (36 percent) of soundbar owners are connecting at least one portable device to their soundbar. Nearly a quarter of consumers (23 percent) say they connect their smartphone to a soundbar, 16 percent to either a tablet or notebook computer, and 12 percent to an iPod.

"Soundbars have been around for nearly a decade, and we are still seeing significant momentum in the market," said Ben Arnold, executive director, industry analyst, The NPD Group. "Features like Bluetooth have helped to drive interest, sales, and usage--especially among millennial consumers."

Millennials account for 44 percent of all audio hardware spending, according to NPD's Consumer Tracking Service, up from just 35 percent a year ago. And millennials collectively spend more than $300 million yearly on soundbars, placing the category among the top three for most audio dollars spent by 18-34 year olds.

According to the report, nearly two-thirds of millennial owners use a soundbar to listen to music/audio content aside from when they are watching TV, and spend about 22 percent of their time doing so, compared to the total population which spends about 15 percent of time using the soundbar for just radio, music or podcasts.

"Millennials are one key factor to growing the soundbar market, but there are several others as well," said Arnold. "Our latest soundbar market forecast shows annual growth at about 20 percent through 2016 and that will be driven by lower selling prices, new products on the market, and consumer adoption of new TV technologies, like 4K. These factors will all combine to help grow demand for soundbars in consumer households."

Methodology
More than 6,000 U.S. consumers were surveyed from NPD's online panel in Q1 2015, of which approximately 750 were soundbar owners.