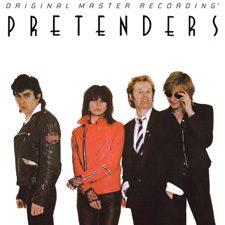 As part of its CES demo, Mobile Fidelity highlighted music tracks mastered with the company's new Ultradisc UHR GAIN HD mastering technology, designed to achieve "a higher level of musical accuracy, resolution and fidelity from CD." The first three CD re-issues to utilize this technology, which is described below, are The Last Waltz from The Band, Forever Changes from Love, and the Pretenders' self-titled debut album.

GAIN stands for Greater Ambient Information Network, "and that's an indication of exactly what listeners will hear with our new mastering process," said John Wood, Executive Vice President of Mobile Fidelity. "The GAIN HD 4X DSD process delivers a subtle but significant improvement in low-level detail, ambient information and 'air,' and perhaps most importantly, a relaxed ease in the musical presentation that simply sounds less 'reproduced' and more natural and involving."

The GAIN HD mastering chain starts with Mobile Fidelity's custom Studer tape playback deck with proprietary reproducer electronics and tape head designed by legendary engineer Tim de Paravicini. "Thanks to this one-of-a-kind tape machine, we're pulling off more musical information from the master tapes from the get-go," Wood pointed out. From there the signal is directly coupled to MFSL's 4X DSD A/D converter which samples at 11.2 MHz or 256fs, or 256 times the CD sampling rate of 44.1 kHz. The 4X DSD file is then downsampled to 1X DSD for the SACD layer and the 4X DSD file is also downsampled to 44.1 kHz for the CD layer. The result is better resolution in both formats.

"This is just the beginning of a number of announcements Mobile Fidelity will make in the coming months as we enter into a new era of technological growth," Wood added, "including the debut of an all-new analog vinyl LP mastering process that we're extremely excited about."

Mobile Fidelity Sound Lab has been the leader in audiophile recordings since it was founded in 1977 by producer and recording engineer Brad Miller. The company's first half-speed-mastered Original Master Recording LPs set a remarkable new sonic benchmark for vinyl playback and through the decades MFSL has continued to redefine the state-of-the-art in LP, CD and high-resolution digital sound with technologies including the Ultradisc 24-karat gold-plated CD, GAIN 2 mastering system, Ultradisc UHR (Ultra High Resolution) SACD disc and other breakthroughs. The company offers the highest-quality re-issues across a wide variety of musical genres from artists as diverse as Stevie Wonder, Miles Davis, John Lennon, The Pixies, Frank Sinatra, Billy Joel, Elvis Costello, The Allman Brothers Band, Tony Bennett and many others.

Wood stated, "For almost four decades Mobile Fidelity has been completely dedicated to furthering the development and acceptance of audiophile recordings. This has never been more important than today, where compressed audio and compromised sound encroach upon us more and more." He concluded, "If anything, this gives us all the more reason to do what we're doing with our newest technology upgrades - which is to bring music lovers and audiophiles closer than ever to listening to master-tape-quality sound in their home and enjoying a growing number of recordings the way the artists and producers intended them to be heard."

Additional Resources
• Visit Mobile Fidelity's website to see the company's complete collection of audiophile recordings.
• Do You Need to Love Music to Be a True Audiophile? at HomeTheaterReview.com.