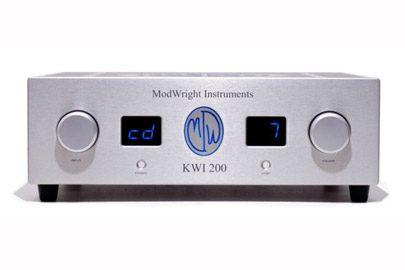 Dan Wright's company, ModWright, has introduced the new KWI 200 integrated amplifier. The piece is certainly attractive. However, as we all know, looks aren't everything. How does it sound? Terry London investigates. 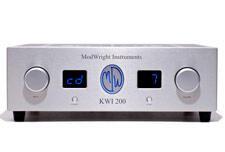 Dan Wright first became well known and highly respected for his modifications of other companies' digital components, hence his company's name ModWright Instruments Inc. Under this banner, he has manufactured his own designs of either solid state or tube based preamps and solid state amplifiers. There is a large and loyal clientele for his designs because of a combination of excellent service, great pricing, and very high performing pieces in his product line.

Additional Resources
• Read more reviews in our Amplifier Review section.
• Find a pair of Bookshelf Speakers or Floorstanding Speakers for the KWI 200 to drive.

This review is on his new KWI 200 Integrated Power Amplifier, which retails for $5,000.00. The dimensions of KWI 200 is six inches tall by 17 inches wide and deep. The KWI 200 weighs 62 pounds. My review sample was silver, but it can be ordered in black. The KWI 200 is an A/B mosfet based design that puts out 200 Watts into 8 Ohms and 400 Watts into 4 Ohms and has the watts and current to drive virtually any speaker. The front panel of the KWI 200 has two knobs for selecting source and volume, two digital read outs for source and volume level. It also has an on/off button for home theater bypass. Right in the middle of the front panel is an attractive blue back light etched with the ModWright logo. The rear panel has the ICE connector, binding posts for connection to the speakers, three sets of RCA inputs, one set of XLR inputs and finally one set of RCA inputs for home theater bypass. The KWI 200 is a fully functional, easy and convenient to use remote control design. The level of performance and aesthetic appearance of the KWI 200 are of high quality.

During the auditioning period that I had the KWI 200, I also had a wonderful selection of speakers in house such as the Aerial Acoustics 5Bi, Vaughn Speakers' floorstanding Barbera, the two-way stand mount Pinot, Reference 3A MM deCapo-I and finally my own pair of MG-1.6's to see how this integrated amp would drive very diverse types of speakers. The conclusions regarding the sonic performance of the KWI 200 were consistent. Even though these speakers used different types of drivers and designs to produce music, the KWI 200 was able to drive anything with a sonic perspective that always stayed musical and engaging.

When I put on Dizzy Gillespie's version of "Con Alma" from his album "Bird Songs" (Telarc Jazz CD), the timbres of his trumpet were rendered in a totally natural and believable fashion by the KWI 200. This represents one of the great traits of the KWI 200---a grainless, almost tube-like tonality with great image density.

The next enjoyable musical selection using the KWI 200 was Quachi Quaro (Soul Sauce) from the album "Jam Miami - A celebration of Latin Jazz" (Concord Records) which has some of the highest regarded Latin Jazz players to play in a large ensemble. Because the KWI 200 has such a low noise floor, the micro-details and top end extension of the timbales, drums, congas, and Latin percussion just floated in a large, fully developed and precisely layered soundstage. The KWI 200 also produced a powerful and tuneful bottom end that drove this music the way the players would want you to experience it.

I wanted to see how the KWI 200 would do with vocals. My next selection was Jacintha's version of the great Johnny Mercer song "And the Angels Sing" from the album "Autumn Leaves" on (Groove Note). If I did not know that the KWI 200 was a solid state design, I would have been fooled into believing that I was listening to a superlative tube based amp. The texture and emotional content of Jacintha's voice were easily experienced along with a three-dimensional image of her singing with her band mates surrounding her in the recording studio.

Read about the high points and low points of the KWI 200 on Page 2.

High Points
• The KWI 200 is built to a high standard and it's a very attractive piece of equipment.
• The KWI 200's sonic performance is at a reference level regarding timbres, sound-staging and offering great extension both in the high and low end.
• Since this integrated amp offers both high levels of watts and current, it will easily drive virtually any speaker on the market.
• ModWright Instruments Inc. has an excellent reputation for customer support and service to provide any information or for repairs.

Low Points
• The size of the KWI 200 might make it somewhat difficult to place it in certain racks or cabinets.
• The KWI 200 has an easy to use remote control and is well made; however, it is made of plastic. If you want the remote in metal to match the KWI 200, it is a $200 upgrade.

Competition and Comparison
Based on actual listening experiences, the only other integrated amps that would sonically compare to the KWI 200 are in a higher cost category. These major competitors are the highly regarded Pass Labs INT-150 at $7,150.00 and the Simaudio 600i at $8,000.00. Both are reference level and offer great build quality and can reproduce the sound of music at extremely high levels of musical enjoyment. However, I believe that not only does the KWI 200 compete with these integrated amps, and it offers the same reference level in the area of micro-details and overall dynamics. In addition, it allows the listener to completely relax and emotionally relate to the music more than the other two integrated amps mentioned above.

Conclusion
I believe that Dan Wright has really "hit the ball out of the park" with his new KWI 200 Integrated Amplifier. Because of its build quality, handsome, physical appearance along with its beautiful rendering of the music's timbres, warmth and details without losing its punch or macro-dynamics, I would classify the KWI 200 as one of the best integrated amps on the market today, regardless of price. I would strongly recommend to put this on your audition list if your think you are in the process of selecting an integrated amp for your system.

Additional Resources
• Read more reviews in our Amplifier Review section.
• Find a pair of Bookshelf Speakers or Floorstanding Speakers for the KWI 200 to drive.