Belive it or not the AC voltage in your home theater and or audiophile system can dip and or surge with little to not notice thus causing all sorts of electrical problems and performance shortfalls for your high priced AV gear. Monster's solution is. 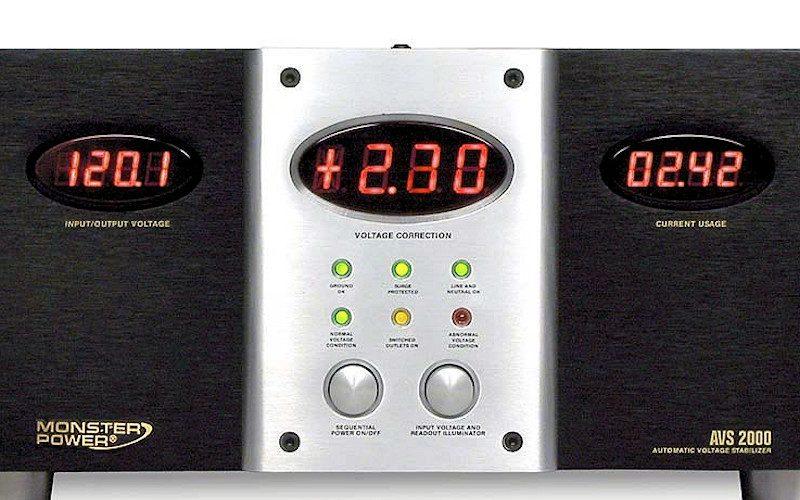 There is probably not a brand on the planet as well known as Monster. Love 'em or hate 'em, Monster has a storied history of making solid consumer-grade cables and power products that has recently allowed them to expand their product line to almost every facet of the consumer electronics marketplace. While they may be branching out into waters unknown (for Monster) with iPod accessories, screen cleaners, a music label, etc., their flagship power product, the AVS 2000 reviewed here, is classic Monster all the way.

The AVS 2000 is a very well-rounded power product providing virtually every feature the complex home theater needs, minus battery backup. The AVS 2000 is a surge suppressor, AC noise reducer and voltage stabilizer all in one and retails for the middle of the road price of $1,499.95. The AVS 2000 has a total of six outlets, four switched and two un-switched, located in the rear of the unit and color-coded to ensure the proper connections. The AVS 2000 also comes equipped with a hard-wired, eight-foot Monster power cable, which is about as thick as a python and equally as stubborn. The front of the AVS 2000 is littered with flashy lights and three digital meters that indicate your system's incoming voltage, voltage correction and total amperage. The AVS 2000 is designed to provide your system with the appropriate 120 volts from a standard AC wall outlet by employing an internal transformer that can step up and boost the power output if the AVS 2000 senses sag between 80-140 volts. If the AVS 2000 senses a huge voltage swing that it cannot deal with, then it will shut your system down to better protect it from negative power effects.

High Points
• With a constant 120-volt output and AC noise filtration, the AVS 2000 ensures you're hearing every detail and getting the most from your components.
• The AVS 2000 has a high enough total power rating that you can plug everything but the craziest of power amplifiers into it. Products such as the massively powerful Krell Evolution series of amplifiers should be plugged directly into your wall outlet.
• The AVS 2000's build quality and finish are first-rate and, after several years of ownership, it has never stalled or quit on me.

Low Points
• The AVS 2000 is huge, as big if not bigger than most mega-watt power amps, so placement and mobility may be an issue.
• The large meters on the AVS 2000's faceplate look cool at first, but become more of a nuisance as time passes, leaving them largely bypassed for long-term use.
• The AVS 2000's six outlets may prove limiting for large complex systems, which may require additional AVS 2000s or other power products.
• As the AVS 2000 is "correcting" for voltage errors, etc., it does make audible "clunking" sounds, which can be a bit distracting.

Conclusion
The AVS 2000 has all the right features and qualities needed for a reference-grade power product, save maybe battery backup. While not cheap at just under $1,500, the AVS 2000 is far from the most expensive product in the market today. The AVS 2000 is a solid performer and allows you to get the most from your system in terms of stability, reliability and performance. While it is a bit of a crass visual statement, you cannot deny that when it comes to what matters most, the AVS 2000 delivers.