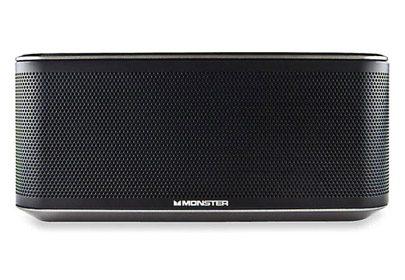 As a writer for HomeTheaterReview.com, I often have friends and family members showing me their latest audio-related purchases or asking for advice about contemplated future purchases. This past summer, there was a definite theme in the gear I was shown and asked about. I was fortunate to attend a lot of barbeques and parties in a variety of locations, such as backyards, parks and beaches. The item that showed up at a surprisingly large number of these events was some sort of portable speaker, usually driven by an iPhone or iPod.

The ClarityHD Micro is a $229.95 pocket sized wireless speaker system with a built-in rechargeable lithium-ion battery. It can connect to a music player via either Bluetooth or a standard 3.5mm headphone cable. AAC and apt-x technology keeps the Bluetooth signal clean and I had no problems with obtaining solid connections to both my iPhone 4S and Blackberry Torch at ranges of up to 25 feet or so. In addition to acting as a Bluetooth music speaker, the ClarityHD Micro also has an integrated microphone, allowing it to work as a Bluetooth speakerphone. While I did not originally think much of this feature, I quickly learned to appreciate it, as the sound quality easily surpassed the microphones and speakers built in to either of my phones.

The sound quality of the ClarityHD Micro is not going to rival that of a larger speaker system or even a larger dock system, such as the Bowers & Wilkins Zeppelin. However, the sound quality is much better than the ubiquitous cylindrical expanding speakers that seem to be everywhere. The sound quality and output are ample for background music in a medium-sized room. When used outdoors, the ClarityHD Micro was powerful enough to be clearly heard over background noise in an area large enough to cover a handful of picnic tables.

High Points
• The sound quality of the ClarityHD Micro is a definite step above the majority of micro portable speakers I heard at this summer's various events.
• The ability to use the ClarityHD Micro as a speakerphone was an added bonus. The microphone and speaker in the ClarityHD Micro were significantly better than their counterparts in my iPhone 4S, allowing for easy-to-understand speakerphone calls.
• The voice commands allowed control, which can be very useful in situations when your hands are full.
• Bluetooth connectivity allows compatibility with a wide variety of phones and music players.

Low Points
• The ClarityHD suffers from some annoying voice prompts from the speaker.
• Sound quality is still compromised when compared to larger dock systems, including the ClarityHD Model One.

Competition and Comparisons
All in one, Bluetooth or wireless speakers are becoming a very hot topic within the specialty AV space. Bowers & Wilkins has grabbed the reins of this new market with both hands, putting a number of great products in the Zeppelin line as well as the A7. Other entries into the space include Libratone, Paradigm and Audio Pro. For more on these speakers and others like them, please visit Home Theater Review's Bookshelf Speaker page.

Conclusion
The ClarityHD Micro has gotten a lot of use over the past month or so that I have had it. It has served as a speakerphone in a car not equipped with Bluetooth and even in a couple of meetings where a traditional speakerphone was not available. Where the ClarityHD Micro really came in handy is that its slim form factor and relatively small size let it be easily packed into tight spaces. This allowed it to be used more often, rather than be left behind. The sound quality does not match that provided by some of the better larger docks and speaker systems, but it is a definite step up from many of the other micro speakers available.