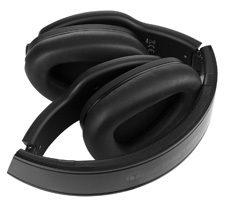 The Monster DNA Pro 2.0 is a sleeper in Monster's large headphone lineup, which features a large selection of flashy, celebrity-endorsed offerings. The DNA Pro 2.0 ($299) is a closed-back over-the-ear design with a more subdued appearance, although it still includes some stylish features, such as the triangular ear-cup inserts. The DNA Pro 2.0s are available in white, black, or carbon fiber. My review sample came in carbon fiber, which features an attractive black woven pattern on the headband and the border of the ear cups.

The headphones feature MusicShare, which means that each ear cup has a jack for the cable, allowing multiple headphones to be daisy-chained off of one source so that you can easily share your music with friends. The DNA Pro 2.0 also comes with two cables, one of which has a ControlTalk module that contains a microphone and provides basic control functions. Lastly, like other Monster headphones, the headband folds in order to store the headphones in the included soft pouch.

When I began my review, what first caught my attention was the iOS application that Monster created to accompany the headphones. It's called Monster Sound Experience. I loaded the application on my iPhone and tried listening to music through both the Monster app and the standard Apple music player. The Monster app provides numerous EQ settings for a large variety of genres, as well as specific artists. These settings can be turned off, selected manually, or set to automatically engage. My initial thought when seeing the application was that it seemed gimmicky--make a headphone that's well balanced, and EQs based on music type will not be necessary. I then met with Terence Dover of Monster, who has a background as a songwriter, producer, and engineer. Terence explained that much of the music we listen to is mastered to work with a wide variety of systems and that the Monster Sound Experience application will restore the sound to the producer's original intended profile. The app's EQ curves take into account the DNA Pro 2.0's capabilities and what changes are typically made during the mastering process in order to bring the sound back closer to the intended profile. I used the app's Auto setting to select the EQ profile automatically based upon the music being played. When auditioning the DNA Pro 2.0 headphones with my iPhone, I found myself using this app more than not, as it added presence to vocals. While it might not be the most accurate, I generally found the music to be more engaging.

I also listened to the DNA Pro 2.0s with the Questyle CMA800i integrated DAC and headphone amplifier to see what they were capable with a high-end system.

With Michael Jackson's "P.Y.T." from the album Thriller (DSD, Epic), the DNA Pro 2.0s had strong, deep bass, but with less detail and texture than the Focal Sphear headphones. These headphones clearly have a "smile" frequency response curve (emphasizing the highs and lows), which results in vocals that were a bit recessed but highs that were clear and pronounced. When I switched to listening to an AIFF file on my iPhone with the Monster Sound Experience app EQ engaged, the vocals became more prominent, and there was a sense of increased dynamics. I found the changes with the Monster Sound Experience app when listening to Taylor Swift's "Mean" from the album Red (AIFF, Big Machine Records) to be similar in nature but less dramatic.

High Points
• The MusicShare feature provides two headphone cable ports, enabling daisy-chaining of headphones so that a single source can be shared with multiple listeners.
• The ControlTalk system combines a microphone with easy-to-use controls for iPhones and other smartphones.
• The headband folds to fit the headphones in the included carrying pouch.

Low Points
• The triangle-shaped ear cups are relatively narrow and may be too small for some ears.
• I found the midrange to be a bit recessed and the bass notes to sacrifice some detail for extension.
• The Monster Sound Experience application has limited functionality in that it can only play music stored on the iOS device; streamed music cannot be processed by the app.

Comparison and Competition
The primary competition for the DNA Pro 2.0 is likely to be the popular Beats By Dr. Dre Pro ($299), which is another stylish, passive headphone. The Sennheiser Momentum 2 ($349) and PSB M4U1 ($299) are also top contenders for passive headphones in this general price category.

Conclusion
After a lot of listening to the DNA Pro 2.0 headphones--both through the Questyle CMA800i headphone amplifier and my iPhone, with and without the Monster Sound Experience equalization engaged--I have to say that these are the best-sounding headphones I've heard from Monster. They sound more natural than the 24K Monster headphones; even though they have a "smile" shaped response curve, the bass is tipped up a bit less with the DNA Pro 2.0 than it is with the 24K.

The DNA Pro 2.0s are a solid choice for a good, general-use headphone. If you listen to a lot of vocals-centric and acoustic music, I would probably seek something with a flatter bass profile, but the moderate bass bump works well with many other music types. The Monster Sound Experience application is a nice bonus and is fun to play with--allowing the headphones' bass profile to be easily tuned to work better with music in which detail is more important than quantity.

All in all, the DNA Pro 2.0s perform well. They are comfortable, do a good job with noise isolation, and sound good regardless of whether the app's EQ profiles are engaged or not. I will still reach for my Audeze LCD-XCs when I need to do some critical listening, but for casual listening or traveling, the Monster DNA Pro 2.0s do quite well.