Monster Cable is the king (or the inventory) of the "attach sale" and this two chassis AC power product for home theater and consumer electronics use is specifically targeted at the home theater user and all of his or her juicy AV gear. 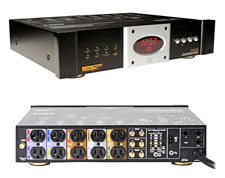 If you bought a Porsche 911, you wouldn't fill it with 86-octane fuel from Joe's Gas O'Rama. Why is that? Obviously, you'd want to squeeze every drop of performance out of your investment and protect it from harm. In the case of the Porsche, that equates to quality gasoline, quality oil, a knowledgeable mechanic and a garage to keep the elements at bay. Home theater equipment is no different.

When you purchase a big screen television or projector, you connect high-grade video cables and you hire a professional calibrator to get your picture just right. Whether it's a Porsche or a projector, the point is that you need to examine your entire system to make sure you've eliminated the weakest link(s) in the chain. Only then can you optimize your A/V performance. When it comes to home theatre equipment, one link that's often overlooked is power. Polluted AC power can have a variety of negative effects on the performance of your gear. These effects can include picture streaking, decreased or uneven brightness, audible hums, and all manner of distracting visual artifacts. Monster Power's HTS 5100 is the perfect solution to these problems, providing a lot more than mere surge protection.

Unique Features - Part of Monster's Reference Home Theater Power line of power conditioners, the PowerCenterTM HTS 5100 has been designed from the ground up with A/V enthusiasts like you and me in mind. For starters, its surge absorption is rated at an impressive 3145 Joules and Monster offers a $500,000 connected equipment warranty. In addition, the HTS 5100 provides clean, filtered power to ten connected components and also allows for delayed turn on/off with various delay settings. You can also connect one component using the Remote On/Off jack to instruct the HTS 5100 when to come alive and when to power down. I connected my Yamaha RX-V1500 receiver to this connection. Now, whenever I turn the receiver on, the HTS 5100 knows it's time to work and switched outlets spring to life. Like I said, this is a lot more than surge protection.

Installation/Setup/Ease of Use - Unpacking the HTS 5100, it became clear that this unit is built like a tank. Considering its svelte four-inch height, the unit weighs a surprisingly hefty twelve pounds. The PowerCenterTM features a long, heavy gauge power cord, which makes connection easy if you're using the unit in a shelf system or A/V rack. Trim covers are included in case you wish to rackmount your HTS 5100.

Although far from being its most important feature, the looks on the HTS 5100 are first rate. Between its black case, brushed aluminum faceplate and dimmable LED, the HTS 5100 makes a killer first impression. The LED can be completely darkened if you don't enjoy monitoring voltage and total current draw. (But why wouldn't you?)

Before I plugged in my bevy of AC power cords, I took advantage of the unit's auxiliary protection for my phone line and coaxial/satellite cable. The phone protection is welcome, since DVRs such as my Samsung DirecTiVo require a phone connection for receiving program guide updates during the wee hours. The coaxial protection is of particular interest to me, since eight months ago a lightning strike to my satellite dish toasted my previous DirecTiVo. It was clear that the damage was a direct result of the coaxial connection between the dish and the box. As Doc Brown might say, the trouble with lightning is that you never know where or when it's going to strike. As a result, I can't really test the protection provided by the HTS 5100, but it's nice to know it's there. According to the user manual, Monster's connected equipment warranty does extend to lightning-based surges.

With phone and cable connected, I started connecting AC power. The HTS 5100 features several banks of outlets, each with different types of protection. Each outlet is color-coded and Monster recommends plugging your gear in where labeled. Two outlets feature a High Current Audio Filter for protecting your amplifier(s). The next two provide an Analog Audio Filter for a preamp/processor or you're A/V receiver. Next up is a pair of outlets complete with a Video Filter for things like your VCR or television. The list rounds out with four outlets protected by a Digital Filter for things such as your DVD player, HDTV tuner, satellite receiver, etc. After making my connections, the fun part began as I decided which outlets should be switched and which should be unswitched.

Each pair of outlets can be set to either unswitched (always receives power as long as the HTS 5100 is plugged in) or switched (will only receive power when the HTS 5100 is turned on.) Most gear can be switched, however I recommend keeping your DVR or VCR unswitched so that timer recordings and content downloads do not get interrupted. For switched outlets, the HTS 5100 provides three timing options: no delay, six second delay and a 20 second delay. This is useful if you want a particular sequence of when things power up. The 20 second delay is great for things like amplifiers, which you typically turn on last and turn off first.

Final Take
With all of my equipment, I started looking at a few DVDs I've watched plenty of times. The picture from my Panasonic RP91 DVD player and Epson PowerLite Cinema 500 projector seemed improved, but it was sometimes difficult to pinpoint exactly what seemed better. Video during Spider-Man 2 seemed a bit more vibrant and video noise was slightly reduced. The improvements were minor, but they were certainly there.

The Dolby 5.1 soundtrack for Spider-Man had less perceptible background noise and hiss coming through my RBH MC Series speakers. The score seemed to take on additional punch, and this made for a more enjoyable experience. Once again, I was not blown away by most of these improvements, but a realized performance gain is no small detail.

My sixteen month-old son Daniel has taken a special liking to a blue fleece blanket that we keep in his crib. It has become a comfort for him and helps him go down for bed. Although I can certainly sleep without it, the HTS 5100 has become my fuzzy, blue blanket. If I'm ever concerned about my (expensive) equipment, the HTS 5100 reminds me that my gear is getting clean, uncolored AC power. Plus, if another lightning bolt decides to find its way to my house, I know I'm covered. That, in itself, is worth the price of admission.