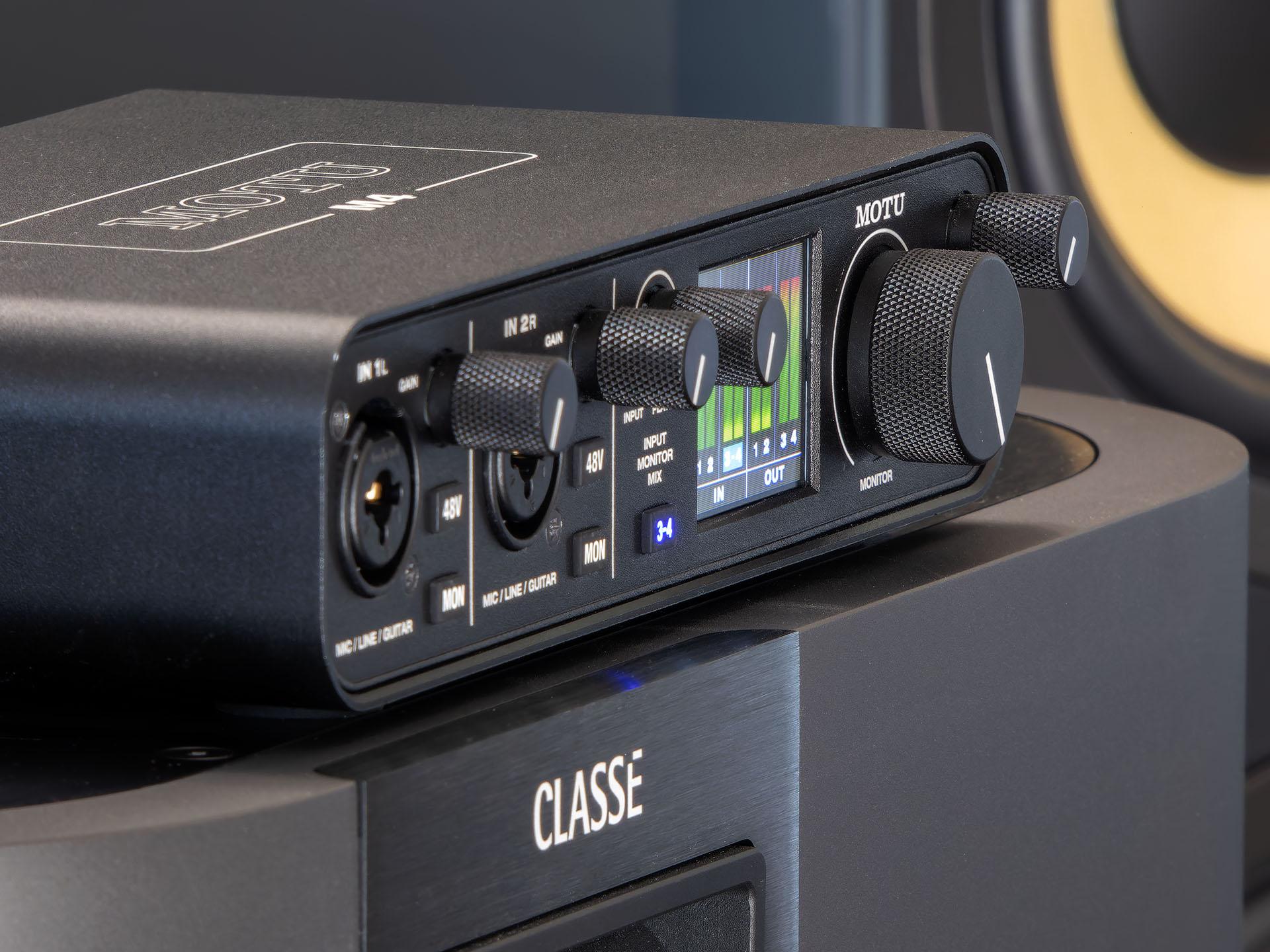 The Motu M4 is more than just a USB DAC. It is a powerful but simple audio tool with incredible fidelity for what it costs. 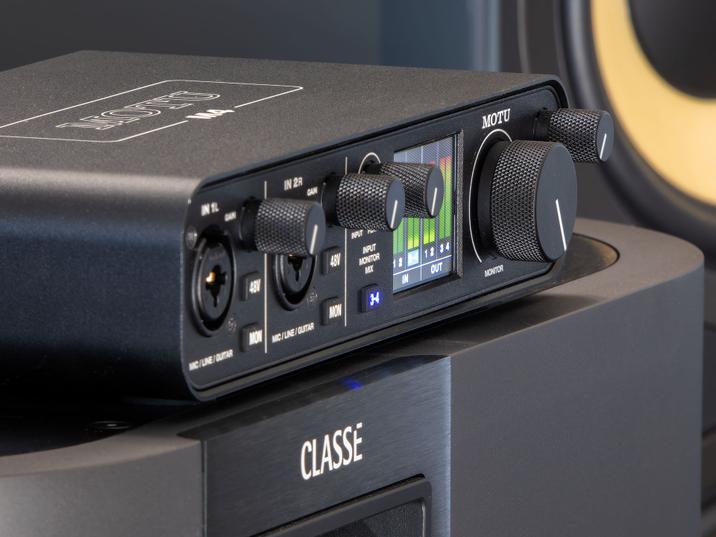 The USB audio interface is an essential component of both home and professional studios. It is a DAC, but it is also an ADC (analog-digital converter), the DAC's inverse. In a nutshell, it's a device that records and plays back digital audio. Because USB audio interfaces are designed for professional audio applications, they frequently include balanced XLR connections, 24-bit or even 32-bit hi-res support, and they measure well. In my opinion, a USB audio interface like the Motu M4 ($269.95) provides excellent value when used as a DAC or even as a preamp.

Background: For the past 15 years or so, I've relied on USB audio interfaces manufactured by a company called Motu. They are the next logical step up from Focusrite's super popular Scarlett series of USB audio interfaces. I used them with my PC to make music, and that's how the device is marketed: as an audio production tool. I bought the Motu M4 for myself, not to review—that was not in the cards, never occurred to me. However…

I recently received for review two high-quality 2-channel devices with balanced XLR connections: a Rotel RCD-1572MKI CD player and a Classé Delta Stereo amplifier. But I didn't have a preamp with similar connections. Instead of looking for one or resorting to using the RCA connections and my Denon AVR, I decided to give the Motu M4 a try; it did so well at the task that it inspired me to write this review.

This is a 4-in/4-out device that runs on USB-C power and connects to a PC the same way. It can run standalone from a USB phone charger. Inside you'll find a ESS Sabre32 Ultra™ DAC, which is the same DAC you'll see in top-tier audiophile gear. Even the headphone jack taps into this excellent DAC.

The front panel has a pair of hybrid XLR + 1/4" inputs, a knob to adjust the "input monitor mix", buttons for engaging monitoring of channels, "phantom power" switches for microphones, a "monitor" adjustment knob (i.e. volume) and a 1/4" headphone jack with its own volume control. There's also a level meter for all four input and output channels, making it easy to detect signal clipping.

Look on the rear panel and you'll find a MIDI in/out port, mirrored RCA stereo outputs, and four 1/4" balanced outputs on the M4. Granted, some functions, like MIDI, will not be used for home audio. I only need the rear pair of 1/4" inputs, along with the corresponding 1/4" outputs, and the USB-C connection for my minimalist 2-channel high-performance audio system.

The hardware specifications are what initially drew me to using an M4 in a stereo system. The device performs admirably in this regard, with a dynamic range of 115 dB for the balanced line input and 120 dB for the output, figures that are sufficiently high for analog I/O that the device is effectively silent and transparent when placed within the system.

The DAC, an ESS Sabre32 UltraTM, is a standout within the specs. It directly feeds audio to the 120 dB dynamic range balanced outputs, and the device simply excels at this task. You can use a Motu M4 to convert any PC into a high-quality balanced source for your stereo system, whether connecting directly to an amp or to a preamp/AVR/integrated. Plus, the headphone jack sounds great, at least as long as you are not trying to drive some esoteric high-impedance low-sensitivity cans.

An M4 is primarily used as a USB audio interface for music production. Its inputs are capable of handling everything from condenser microphones to an electric guitar. You can record in extremely high quality with it—up to 24-bit, 192 kHz. This capability also makes it a viable option for creating high-resolution needle-drop recordings of vinyl records when paired with a quality phono preamp (and this is where the built-in level meters come in very handy).

For 2-channel audiophile purists, the use case for the Motu M4 is its utter simplicity. When I used it in the recent review of the Rotel RCD-1572MKII CD player, I used a pair of 10-foot XLR to 1/4" cables to make the connection. Why so long? Because I have the amp situated between the speakers, but the CD player is in a stack in a corner. But, with balanced connections, a 10-foot run is a non-issue thanks to the inherent noise rejection.

Used as a simple preamp, there's nothing too much to do in terms of setup. After plugging in the cables, it's a matter of pressing the monitor button, which feeds the input directly to the output while allowing for volume adjustment. There are no tone controls to worry about, no circuitry for adding a subwoofer or anything like that, you get a very pure and minimalist path for the signal to follow. Or if you want to get super advanced and technical, you could digitize the input, send it to the PC for any type of processing you can imagine, and play the result, i.e. exactly what a USB audio interface does for a day job in a studio!

With non-musicians, the most attractive use case scenario for M2 is as a USB DAC. Of course, it has a whole different look and feel versus high-performance consumer audio gear. I happen to like "pro" audio equipment for its all-business, no-frills nature. Anyhow, in this usage, you simply plug the M4 into a PC, set it as the default audio, and you are good to go. And no worries if you amp or integrated or receiver only supports unbalanced RCA connections, the M4 has that, too.

Another potential use for the Motu M4 is if you want to put together a podcasting rig and utilize a high-quality microphone. That is one of the main purposes of a USB audio interface such as this, with the right microphone it’ll give your voice that “professional broadcast” quality sound. And if you sing, well, a good vocal mic and a Motu M4 is pretty much all you need.

That is practically nothing to report here, and I mean that in the best sense possible. I put this little piece of kit in between an $1100 CD player and a $13,000 amplifier, powering a $6600 pair of Focal Aria K2 936 speakers, and the Motu M4 simply disappeared.

The sound delivered by the 2-channel rig had all the profundity one expects from a big-budget system that is largely free of any technical constraints, there's no "weak link" in the chain, the electronics are all in the same ballpark—aside from the astonishing 1 Hz to 650,000 Hz bandwidth of the Classé Delta Stereo amplifier, that's over the top! Point is, the backdrop for everything I listen to with the Motu in the system, is complete silence.

The hands-on listening encompassed a wide variety of music, and beyond music, recorded sound. I used the M4 to stream high-definition / hi-res music from Tidal and Amazon. I also used it to play CD-quality files ripped to hard disc. And since I produce music, I used the Motu to mix and master tracks that I create using Ableton Live software. I even use the Motu to plug in a high-quality microphone that I use for web meetings, like Zoom.

The moment that convinced me to go ahead and write this review is when I auditioned some CDs with the Rotel, allowing the M4 to act as a simple analog preamp.

Please check out the Rotel RCD-1572MKII CD Player review for listening impressions of a system with the Motu M2 in the signal path.

Rather than go through a bunch of listening experiences here, I'd like to refer you to the Rotel CD player review, where you'll find notes on a variety of different albums, all of which passed through the M4 on the way to the Delta Stereo amp.

Admittedly, M4’s performance did not come as a surprise to me, because I essentially already knew it to be a great-sounding device—when used as a USB DAC. When I create music, I plug in a pair of Audeze LCD-2 closed-back edition headphones which bring out layer upon layer of detail. It’s not the world’s most powerful headphone amp, or anything like that, but what it can do with a good pair of cans simply adds to its value—especially because it’s essentially portable (toss in a backpack or laptop bag portable, not pocket portable).  The surprise was simply how immediately, directly usable it is in the role of a super simple analog preamp.

There are, of course, clichés about how much better this or that awesome piece of audio kit makes the system sound. But at the end of the day, the goal is to leave the signal alone, altered as little as possible as it works its way through. And if successful, what you hear—presuming sufficient talent on behalf of the artist and the production staff— should qualify as an audio epicurean delight, a performance zone where the artists’ intent is delivered in goose bump-raising fashion.

The Motu M4 works exactly as advertised and therefore is a robust, affordable piece of kit. It is surprisingly adaptable thanks to its professional applications as a recording device. The performance-first engineering is what makes the M4 an attractive solution for home audio applications where a dedicated, high-quality DAC with balanced connections is desired.

Motu is a brand that has served me well for a decade and a half, so there's plenty of hands-on personal experience to do with my recommendation. I've also run through the gamut of similar devices, in particular the top-selling Focusrite Scarlett series. Those devices are extremely similar in nature, but IMO model-for-model the latest Motus have a performance edge (a measurable edge, FWIW).

The M4 hardware is reliable functional and well-engineered. The performance is measurably good and verified and of course, the proof is in the pudding: You can place an M4 into a high priced, high performance, "highly resolving" system it'll at once disappear, and paradoxically make its presence known through that clarity, because when it comes to high fidelity audio reproduction, in a very real sense, it's what's not there that counts. And in this case, what’s not there is any distortion or degradation of the sound that goes through this handy little box. It's an Editor's choice and it's also my choice.