Steven Stone takes a look at a new company, Munitio. Stone takes the company's PRO40 headphones and puts them to the test. While the headphones may be ruggedly built, how do they sound? 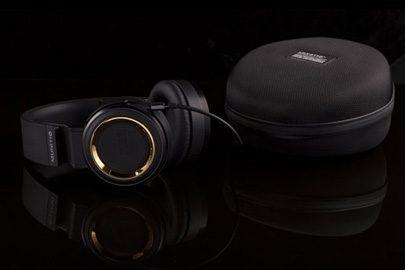 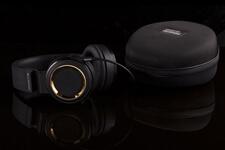 Munitio’s first products were in-ear monitors that used actual ammo shells for their casings, hence their trade name. Although the headphones were promoted more as a lifestyle product than a high-performance audio offering, I was pleasantly surprised when I reviewed them for Audiophile Review and found that their performance exceeded many lifestyle earphones I’ve auditioned. Munitio’s latest headphone offering is a full-sized $349.99 over-the-ear headphone that claims to have taken “design cues from industry professionals” to create a “durable, confortable, and precise” new design. Would the PRO40 headphones be as overachieving as the Munitio BLK 9mm Ballistic earbuds? Let’s find out.

The Munitio PRO40 headphones use 40mm titanium-coated drivers with neodymium magnets that are enclosed in a proprietary “Bass Enhancement Chamber.” With a sensitivity rating of 100 dB for 1 mW and 32-ohm impedance, the PRO40 should be easily powered by most portable devices. The PRO40’s earpads are made of what Munitio calls “protein leather”; I’m not sure how this differs from “carbohydrate leather,” but it is certainly soft and very pliable. Munitio’s headband design employs what they call “Coda Axis,” which is an in-line gimbal technology that Munitio claims “provides each ear-cup a full range of motion to maximize comfort without disturbing the speaker drivers.” The PRO40 headband is made of high-density polymer and aircraft-grade aluminum that Munitio says will “sustain heavy use in any environment.”

Accessories include two cables, easily attachable via a standard stereo mini-plug: one has a three-button iPod- and iPhone-compatible remote control, and the other is a coiled cord with no remote. Munitio also includes a stereo mini-to-standard-0.25-inch stereo adapter that screws into the coiled cord. The one I received was defective and didn’t pass any signal, but any adapter will work. I used one from my Audio Technica ATH-AD900X. The PRO40 also has a nice hard-shell case made of, you guessed it, ballistic nylon – complete with a carbineer for attaching the case to your belt, backpack, or ammo bag.

For most users, a headphone’s comfort is the primary determining factor in whether they like or hate the product. The PRO40 gets high marks for fit. Even when I wore glasses, the PRO40’s large, soft earpads molded around my glasses’ sidepieces to make a tight yet comfortable seal. Unlike many headphones that force you to fiddle to get a tight seal, PRO40 headphones fit well from the beginning and didn’t require any tweaking to get optimal comfort.

Given Munitio’s macho image, I expected the PRO40 to be rugged, and it didn’t disappoint. Short of throwing these headphones against a brick wall, stomping on them, or dropping them from a couple of hundred feet up, I can’t think of any way that you could seriously damage the PRO40 during normal use. Even the traditional “I stepped on the cable and yanked my headphones off my head” syndrome is covered: if you step on or pull the cord, it will merely disconnect from the headphones. I especially appreciated the supplied coiled cord, which was just the right length and flexibility to work well with my Astell & Kern AK100 portable player.

My only ergonomic quibble with the PRO40 headphones is that the Coda Axis may not supply enough horizontal flexibility for some users. On my admittedly small head (7.125-inch hat size), I could have used a bit more horizontal travel for equal force on both sides of my ears. As it was, the PRO40s exerted more pressure on the back side of my ears than the front side.

Read more about the Munitio PRO40 headphones on Page 2. 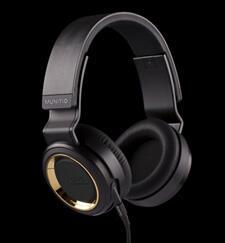 Most “lifestyle” earbuds and headphones tend to have an exaggerated lower-frequency response. The PRO40 headphones follow this formula, but with less exaggeration and bloat than many I’ve heard. Harmonically, the PRO40 is definitely on the warm side, with an elevated midbass frequency response. Fortunately, the extra dollop of bass is clean and well defined. The PRO40’s overall definition level is what I would call “medium.” It delivers most of the music, but with some loss of top-end extension and detail. While not so severe that I would call the PRO40 “hooded,” these headphones simply don’t have as much air and upper-frequency detail as I would have liked. On Casey Driessen’s album 3D, his fiddle didn’t have as much cutting power as it should. Fortunately, the PRO40 has a smooth and easy-to-listen-to midrange that emphasizes musicality and euphony. Even on less-than-ideally recorded material like the Rolling Stones’ Got Live if You Want It, the PRO40’s warm, rich midrange was quite listenable.

The PRO40 has some degree of sound isolation, but it’s more for keeping your music from disturbing others than for silencing the outside world. If you need to hear car horns and other outside sounds while you wear earphones, the PRO40 will work nicely. But if you are looking for highly isolating earphones, the PRO40 may not fill the bill.

High Points
• The PRO40 is ruggedly built, which isn’t always the case in this category of headphones, believe it or not.
• The fit is very comfortable to my ears.
• The detachable cord is coiled, which is a very nice touch.
• The PRO40 has a slightly bass-heavy sound.

Competition and Comparison
Given the number of headphones on the market, especially around the $350 range, it’s impossible to compare the PRO40 with every other headphone near its price. I’ll stick with what I’ve actually heard. The $349 (list, $250 street) Audio Technica ATH-900x closed-back headphones deliver quite a bit more upper-frequency extension and inner detail than the PRO40. With a more neutral harmonic balance and larger soundstage, the ATH-900x headphones are a better choice for critical listening than the PRO40. The ATH-900x also offers a much wider range of fit options with more horizontal and vertical range of motion. On the downside, the ATH-900x is not as robustly built as the PRO40 and will not stand up to anywhere near the same level of abuse. For portable use, the ATH-900x’s permanently attached cable may be too long and ungainly without some shortening via a rubber band or cable tie.

The now deeply discounted AKG K701 ($539 list, $278 street) has long been a standard go-to headphone for pros and audiophiles alike. The K701, like the
ATH-900x, has quite a bit more open and extended top end than the PRO40. The K701 also provides greater inner detail and low-level information than the PRO40. Unlike the ATH-990x and PRO40 headphones, the AKG K701 requires a lot more juice from the Astell & Kern AK100 to drive them to a satisfying volume level. The K701 also lacks a detachable cable, which is why many prospective users opt for the more expensive Quincy Jones Signature Q701, which has a removable cord. 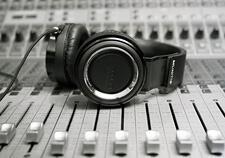 Conclusion
If you are the kind of person who regularly destroys headphones, the Munitio PRO40 over-the-ear headphones may be just what the insurance adjuster ordered. Short of a high-impact collision, I can think of little a user can do that would destroy a pair of PRO40s. Yes, the Munitio PRO40 is built to last. With a bit of extra bass power and slightly rolled-off upper-frequency presentation, the PRO40’s overall sound is on the dark, warm side of neutral, better suited for peaky pop than audiophile reference material. Although a trifle dark, the PRO40 never sounded murky or muddy.