Keeping up with the Krell's of the world can be a hard task but Musical Fidelity seems to have an issue over it much to the delight of their fans as well as audiophile reviewer, Ken Kessler. Read his review of these ultra-powerful amps here. 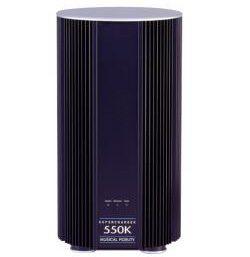 For some years, Musical Fidelity's Antony Michaelson has been banging on about the need for more power than has been considered necessary by the audio community. It wasn't just the single-ended triode brigade that incensed him, with claims for the adequacy of as few as three watts; he also bristled about the dishonesty of manufacturers incapable of designing units able to yield decent amounts of power, and how they'd counter it by distracting the consumer with other concerns, or pure falsehoods.

Antony amped up his campaign for "real amplifiers" around the time of MF's brief foray into speakers. In the intervening years, to prove his point, he's developed models delivering up to a kilowatt. All of which address his virtual religion: Antony is convinced that even at "normal" levels in the home, huge amounts of power are needed to need with dynamic swings, not just maximum SPLs.

My only concern about the Supercharger 550K was that its insertion into a system would mask the sound of the donor amplifier it is meant to augment. I suggested that if someone wants the sound of a big Musical Fidelity amp, they should just buy one, instead of adding a second amp.

Antony played to my anachrophilia. He knows that I use the very hungry Sonus faber Guarneris, and that I cherish a handful of aged amps from the days when 15 watts or 20 watts were used to drive speakers needing negligible power (not unlike the single-ended triode brigade's justification for horns). His entire point is that the Supercharger 550K would preserve the sonic flavor of the amp that precedes it. So I opted for a classic with a sound so distinctive that any tampering would be revealed immediately.

Make no mistake. The reissue of the Quad II is one hell of an amp by any measure, bar one: it simply will not drive a speaker like the Guarneri to satisfactory levels. And yet I knew that their sonic traits were complementary. It was simply a marriage never to be realized. Not so, said Antony. "If you insert the 550Ks between Quads and Guarneris, you'll hear precisely that: the sound of Quads driving Guarneris. Only with power."

Using a number of tracks with expansive dynamics and, more importantly, auditioning a lot of material with distinctive voices, I played first the Quad/Sonus faber combo, then the same with the 550K in line. Back and forth, it was proven again and again that Antony's concern for the preservation of dynamic contrasts has been neglected, and that power starvation is infinitely more important than imaginary bullshit like pace/rhythm/timing (which anyone with a shred of logic will know is only affected by speed inconsistencies in the source). The 550Ks did just what he said they would. The noise floor dropped, images grew more solid, air and space increased.

What I didn't expect was the near-total preservation of the Quad's tonal character. So I enlisted a second pair of ears and we agreed that the only detrimental indication of the presence of the Supercharger was a tiny hardening of the treble. Beyond that, it was exactly as Antony promised: the effortlessness of unlimited power, real-world dynamic contrasts and slam that never came out of the arse-end of a Quad II.

Antony also addressed my point about simply buying a big enough amp in the first place: the 550K is, especially if you adore the sound of a particular, low-powered classic, a miracle of an upgrade.