After producing pro audio products for nearly two decades, Mytek has become a more common name in consumer circles--thanks in part to the recent release of its Brooklyn digital-to-analog converter (DAC). At $2,000, the Brooklyn DAC is a feature-packed product.... 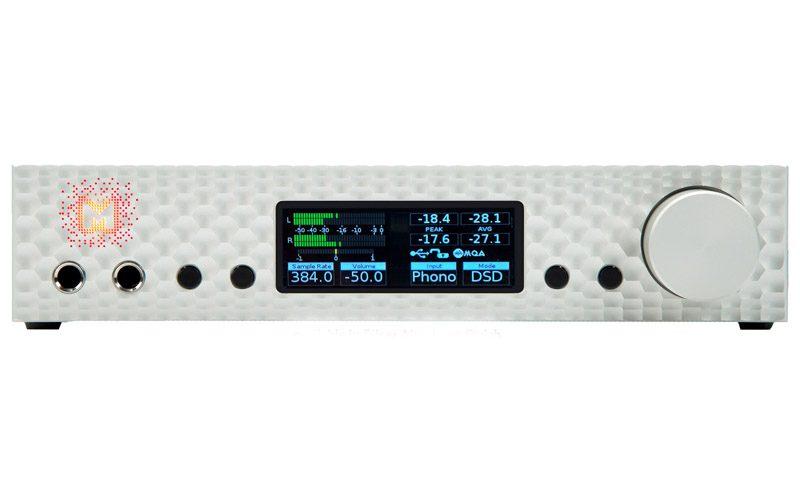 After producing pro audio products for nearly two decades, Mytek has become a more common name in consumer circles--thanks in part to the recent release of its Brooklyn digital-to-analog converter (DAC). At $2,000, the Brooklyn DAC is a feature-packed product. It's one of the few DACs on the market that can fully decode MQA from streaming sources like TIDAL, as well as PCM up to 32-bit/384-kHz, DSD64, DSD128, and DSD256. Digital inputs include USB, AES/EBU, coaxial (x2), and optical, and the Brooklyn also accepts analog sources (with RCA and XLR outputs) and includes a phono preamp for moving magnet and moving coil cartridges. It can also be used as headphone amplifier, with two headphone outputs on the front panel. The plethora of connection options allows the Brooklyn DAC to serve as the centerpiece of a two-channel audio system. For this evaluation, I utilized the Brooklyn strictly as a DAC between my digital sources--mainly, TIDAL and my Synology NAS--and an Audio Research LS-28 preamplifier. All cables were from Wireworld.

Aesthetically, the Brooklyn is small: it occupies half a rack space and weighs just 3.5 pounds. The "scalloped" decorative front faceplate is available in silver or black and contains a sizable LCD, along with the dual headphone outputs, four black buttons, and a single large knob that serves as both a knob and a button. I found that the knob lacked the hefty feel I would expect from a unit in this price range. Mytek provides a silver Apple-like OEM remote.

I began my evaluation of the Brooklyn DAC by listening to Freddie Hubbard's At Jazz Jamboree Warszawa '91: A Tribute to Miles (Sunburst, TIDAL, 16/44.1). The hard-driving Cedar Walton composition "Bolivia" is full of aggressive play, and Hubbard's trumpet was communicated with excellent tonality, even as he pushed his horn to its upper limits. Instrument separation and detail, as well as soundstaging, were good--possessing a relaxed feel both left-to-right and front-to-back. On "All Blues," the Brooklyn was able to easily reveal a single audience member clapping and laughing early in the track.

I first heard Ray Brown's Soular Energy (Concord Jazz , TIDAL, 16/44.1) at Axpona 2017 in Chicago and have been addicted ever since. The album begins with Jimmy McHugh's 1930 jazz composition "Exactly Like You." The bouncy rhythm and chemistry between Brown and Gene Harris (piano) makes this rendition so notable. The Brooklyn offered a highly realistic listen into Brown's playing, which is characterized by him frequently buzzing the strings and using the entirety of the fingerboard. The Brooklyn did an excellent job coaxing every ounce of bass punch from my Focal Sopra N°1 bookshelf speakers. Instrument separation was still clean on "Mistreated but Undefeated Blues," despite the addition to the quintet of guitarist Emily Remler. The clarity between Remler and the saxophone was pleasing. In the closing moments of "That's All," however, I desired a bit more refinement to Brown's solo, which I would not describe as muddy but just lacking a bit of clarity.

Between his solo work, his time with Genesis, and his affiliation with other artists, Phil Collins had more U.S. Top 40 hits in the 1980s than any other artist. Hello, I Must Be Going! (Atlantic, TIDAL, Remastered, MQA, 24/96) resulted in several of those hits and earned him his first Grammy. On every occasion, the tight, pop horn arrangements were produced with refined presence and cut through the mix with precision, never sounding muddy or washed out. The Brooklyn presented the layered vocals on "Thru These Walls" with delicate precision. And my emotional connection to "Why Can't It Wait 'Til Morning" was greater than it has been previously; the string arrangement was more prominent and seamlessly integrated with the overall instrumentation.

I listened to at least a dozen MQA albums from classic rock artists like Led Zeppelin, Jethro Tull, Eric Clapton, YES, ELP, and The Eagles. With Bad Company's Straight Shooter album (Swan Song Records, TIDAL, Remastered, MQA, 24/88.2), the electric and acoustic guitars on "Feel Like Makin' Love" had more noticeable punch, decay, and resonance, and the instrument separation was cleaner and more perceptible versus the lower-resolution versions. The soundstage was highly transparent and detailed. This all evoked more emotional connection to the music, which not only kept me listening to Straight Shooter but also inspired me to experiment with the remaining Bad Company MQA catalog--including Bad Company (MQA, 24/88.2), Run with the Pack (MQA, 24/96), and Burnin' Sky (MQA 24/96). In every case, Paul Rogers sounded better than I can remember, the guitars shared the same characteristics I noted on Straight Shooter, and the drums enjoyed greater attack and punch. The benefits of MQA were clear here, which gives the Brooklyn DAC a clear advantage over any other product in its class and price.

High Points
• The Brooklyn is an affordable high-end DAC that decodes MQA. At this point, most other high-end MQA decoders are much more expensive than the Brooklyn.
• The Brooklyn is a fully featured DAC that includes two headphone jacks and a phono preamplifier. There are very few "must haves" missing from this DAC.
• The Brooklyn's user interface is intuitive and easy to use.
• The Brooklyn's sound is solid throughout the audio spectrum with PCM and DSD formats. It reveals subtle details with clarity and produces a transparent, enjoyable soundstage. It would be right at home in most high-end audio systems.

Low Points
• The Brooklyn does a lot of things really, really well--but nothing to a level that I would describe as outright exceptional. With Red Book sources, for example, the similarly priced Benchmark DAC3 has a slight leg up in transparency, detail, and imaging in my view. But the Benchmark lacks MQA, and I really dig MQA.
• It's a pity that Mytek only provides a somewhat crappy Apple-like remote. It is a disappointing shortcut that makes the entire product feel less "high end" in its space. Perhaps the Mytek designers should consider skipping unnecessary features (like offering 16 color choices for the Mytek logo on the LCD display) and spend their engineering budget in other ways?

Comparison and Competition
The Benchmark DAC3 is the most similar product on the market. Both companies have a heritage in pro audio and produce a full-featured DAC used in home and studio applications. Both products cost roughly $2,000. That is where the similarities end, however. The Benchmark sounds better with Red Book sources, while the Mytek offers MQA and a phono preamp for moving magnet and moving coil cartridges. Making a decision between the two would come down to how important MQA is to you.

Other products in the market that compete with the Brooklyn include the NAD M51 Direct Digital DAC ($1,999), the Cambridge Audio Azur 851D DAC ($1,649), and the Schiit Audio Yggdrasil DAC ($2,299). None of these products decodes MQA sources like the Mytek Brooklyn DAC does.

Conclusion
The Mytek Brooklyn is a great DAC for consumers seeking a lot of features and functions in one box. There's not much it doesn't do which is fantastic at its price point. With MQA on the precipice of becoming mainstream, the Brooklyn represents a great value proposition for those who want to take full advantage of this high-quality format. I used the Brooklyn as my main DAC for several months and would describe it as an above-average performer across the board. If you seek good performance with a full arsenal of features, you can confidently consider the Mytek Brooklyn for your stereo audio system.

You'll automatically be entered in the HTR Sweepstakes, and get the hottest audio deals directly in your inbox.
Author
Ben Shyman
HomeTheaterReview Product Rating
Value:
Performance:
Overall Rating:
When you buy through links on our site, we may earn an affiliate commission. Your support is greatly appreciated!
This is the static ad content. This is just a placeholder for now to get things styled.
Visit Website