Naim Audio has introduced two new high-end pieces of audio gear, The Statement NAC S1 Preamplifier and the NAP S1 Mono Power Amplifier. Each item is engineered to the highest specifications and uses the latest technology in an attempt to... 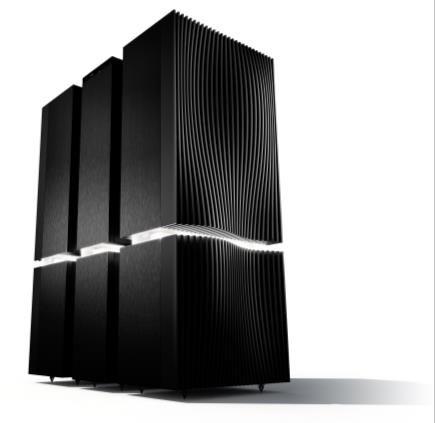 Naim Audio has introduced two new high-end pieces of audio gear, The Statement NAC S1 Preamplifier and the NAP S1 Mono Power Amplifier. Each item is engineered to the highest specifications and uses the latest technology in an attempt to cater to the discerning audiophile.

Naim Audio, the UK’s largest and most successful specialist hi-fi manufacturer, will preview its new reference pre and power amplifiers at an invitation only event at CES Las Vegas from today.

The Statement NAC S1 preamplifier and NAP S1 mono power amplifiers are designed to supply the performance and dynamics that Naim’s customers have come to expect, but on an even greater scale and with the most demanding high-end loudspeakers. The NAP S1 mono power amplifiers are each rated at a massive 746 watts (one horse power) into 8 ohms, 1450 watts into 4 ohms and over 9000 watts burst power into 1 ohm.

Steve Sells, Naim’s Electronic Design Director, first conceived of the idea for the ultimate amplifier over a decade ago and development began in earnest in 2011. Over the last three years the whole amplifier topology, methodology and philosophy has been defined, considered and refined by an experienced team of electronic, mechanical and industrial engineers from across Naim.

Statement will commence shipping in July 2014. Prices are not yet confirmed but are expected to start at approximately $200,000.

After the initial concept stage Naim’s engineering team put practical considerations aside for a moment, to envision the design in free space with complete creative freedom. This allowed them to identify the optimum position for each element of the design. First and foremost this maximises performance from the vital electronic design, which can make or break an amplifier. It also allowed them to identify the best materials and components, which all add their own unique character depending on how they react to electromagnetic radiation, heat, mechanical stress and voltage.

Statement’s radical new vertical form grew out of this experimentation. The heavy power supplies are at the base of each product, suspended on an A-frame and coupled to the floor through floor spikes to protect sensitive electronics housed above from interference. The two sections are separated by a beautiful acrylic divide, which also breaks the path of eddy currents and minimises electromagnetic radiation.

Every aspect of the design was imagined, modelled and auditioned to extract the ultimate in performance, not only in technical excellence as measured on a test bench but where it really counts: playing music. The best amplifier in the world isn’t so, if it isn’t a joy to listen to.

The NAC S1 features a completely new electronic design, optimised from the ground up for sound quality. At the input stages in the lower enclosure all switching is mounted on a brass frame, which is suspended using a leaf-spring system to decouple it from mechanical vibration. It is also covered by an inert metallic cage to dissipate electromagnetic radiation. The signal is converted to balanced within the lower half before being sent through the acrylic divide to the main analogue boards which are isolated in their own spring-loaded suspension system (see below) in the top section. All inputs are also individually isolated from each other so there is no detriment to performance when multiple sources are connected.

There are numerous ways to design an audiophile volume control, each with their own advantages and setbacks. The stepped attenuator can sound great but it does, however, come with one disadvantage in that the sound tends to be uneven during volume change. The new Naim DVC includes a chip volume control that is used while changing volume to allow a smooth progression of change. The millisecond the volume is fixed the electronic volume control switches completely out of circuit back to the now set stepped attenuator.

DVC also uses a fixed set of single resistors for each of its 100 volume possibilities so that combinations of resistors – creating multiple signal paths and multiple path lengths ‘blurring the signal’ – aren’t used.

The NAC S1 utilises a unique mass-loaded suspension system (a technique pioneered by the Naim 500 Series) for the critical preamplifier audio circuit board. Mounting the circuit board onto a heavy brass plate suspended by springs, a combination with a resonant frequency of 9Hz isolates the critical circuits from external and internal vibration from significantly below the human threshold of hearing. Within this isolated system a board housing Naim DRs is suspended in parallel to audio circuitry, giving each stage its own dedicated supply along the shortest possible path.

Sells was determined from the outset that the design would not use overall feedback. By breaking the feedback loop he could guarantee the speed of the amplifier would exceed what was needed to achieve the demanding new power levels and bandwidth. Secondly, by breaking the feedback loop the dynamic loading of the speaker is isolated from the delicate gain stages. The gain stages are then free and always working into a known load.

The NAP S1 power amplifier is a bridged design, which uses three short stages with only the first, the instrumentation voltage gain, using negative feedback. The second is an ultra-fast error cancellation system and the third is a unity gain high current output buffer. Each stage is optimised for only one task and the result is genuinely state of the art performance.

To deliver the power with the performance targeted required a very special output transistor. Naim worked with the supplier of its already famous 007 transistor to produce a very special device, the 009. The 009 utilises Aluminium Nitride (ALN) – a substrate that has ten times the thermal conductivity of traditional Aluminium Oxide. In addition, the thermal paste used, to ensure good thermal conductivity to the heatsink is Nano diamond based. Diamond conducts heat 2.5 times faster than copper, as an example. The result is a transistor running with the maximum possible temperature stability for maximum linearity.

Both preamplifier and power amplifier feature multiple heavily-regulated linear power supplies. The power transformer of the NAP S1 is a huge 4000VA toroid using the finest grain orientated steel for maximum efficiency. Statement’s requirements necessitated specialised Naim discrete regulators to be designed, as currents and voltages are significantly higher than in existing products. This brings the fast recovery and low noise so praised in Naim’s DR technology.

It is an often-used cliché but the industrial design of Naim’s Statement amplifiers is truly form follows function. It may be beautifully finished and expertly crafted but every piece, every screw, was chosen for performance, longevity and of course pride of ownership.

The imposing monolithic structure with its stark silhouette is offset by the organic flow of the heat sink and the beautifully lit volume control and central divide. This duality in the design reflects how Naim’s pursuit of technical brilliance is always grounded in the abstract human experience of music.

The distinctive, sculptured heatsink itself starts life as a single billet of solid aluminium. It is then machined to achieve the general curve profile before the fins are cut by a five-axis CNC machine, which is continually doused with coolant over the course of several hours. The metalwork then travels to a specialist supplier where it is submerged in an electrolyte fluid containing black ink. A DC current is passed through the solution causing a reaction, which creates a perfectly even black coating around the aluminium. Each piece is then painstakingly polished and inspected before being hand assembled at Naim in Wiltshire.

Steve Sells is fanatical about amplifier design. He created his first amp when he was just 14 years old and still exercises his creative muscle by designing new circuits in his free time. “I’ve had the ambition to create the ultimate amplifier ever since I can remember. It’s a rare opportunity to start from scratch and design without compromise.”

Steve was given the green light for Statement in 2010 and since then has worked tirelessly with Naim R&D to make it a reality. “It’s a massive project. To really push the boundaries of what we could achieve has required the efforts of teams from across Naim. Electronic, mechanical and industrial design engineers with combined experience totalling well over a hundred years have contributed to this project.”