Variety is reporting that Netflix has ordered an eight-part documentary from the team who created the popular "Planet Earth" series. "Our Planet" will be a four-year collaboration between Silverback Films and the World Wildlife Fund that will explore remote wilderness... 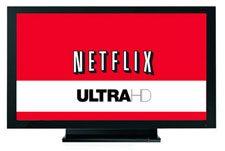 Variety is reporting that Netflix has ordered an eight-part documentary from the team who created the popular “Planet Earth” series. “Our Planet” will be a four-year collaboration between Silverback Films and the World Wildlife Fund that will explore remote wilderness areas. It will be shot in 4K, but you’ll have to wait until 2019 to see it.

From Variety
Netflix, in its biggest documentary project to date, has ordered “Our Planet,” an eight-part nature documentary exploring remote wilderness areas across the globe from the creators of the “Planet Earth” series.

“Our Planet,” a four-year collaboration with Silverback Films and conservation group WWF, is scheduled to premiere across all Netflix territories in 2019.

The series is being produced by Silverback Films, led by Alastair Fothergill and Keith Scholey, who created “Planet Earth,” “Frozen Planet” and “Blue Planet” for the BBC and which aired in the U.S. on Discovery Channel. They’re also the team behind Walt Disney Studios’ Disneynature films “Earth,” “Bears,” “African Cats” and “Chimpanzee.”

“Our Planet,” to be shot in Ultra HD 4K format, promises to present never-before-filmed settings, ranging from the ice caps and deep ocean to deserts and remote forests, featuring some of the world’s rarest animals and most precious natural habitats.

As part of the project, WWF will provide the Silverback team access to its projects in protected areas around the world and will collaborate on multimedia content across its Web and other platforms.

“Netflix is proud to be the global home for perhaps Silverback’s most ambitious project to date,” said Lisa Nishimura, VP of Netflix original documentaries. “The ‘Planet’ projects have enjoyed great success on Netflix and have helped launch new technologies for viewing at home. We think watching ‘Our Planet,’ fully on-demand in 4K, will be an unforgettable experience for our members.”