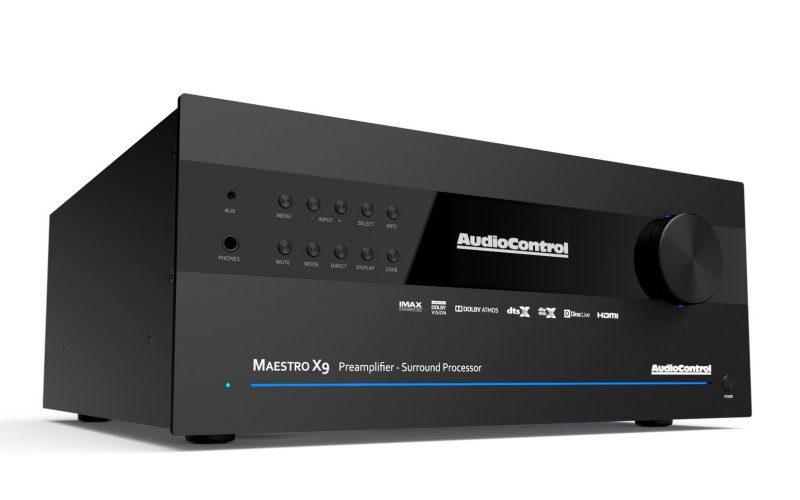 AudioControl announced this week the immediate availability of its new Maestro X9 and Maestro X7 preamps and Concert XR-8, XR-6, and XR-4 AV receivers. All but the XR-4 offer sixteen channels of output (up to 9.1.6) and Auro 3D, in addition to Atmos and DTS:X, and all feature Dirac Live room correction.

Read on for full details from the press release below:

AudioControl has announced the availability of three new A/V receivers (AVRs) and two new A/V processors that were recently unveiled at recent industry trade events. All five units share a stunning industrial design along with the most advanced technologies available, painstakingly engineered to be the ideal foundation of any premium home cinema.

AudioControl's next generation of 16-channel immersive audio high-performance preamp/processors enable home theater specialists and A/V integrators to create systems that deliver new levels of precision, power and control. The Maestro X9 and Maestro X7 support the most sought after immersive surround formats, such as 9.1.6 Dolby Atmos, Auro 3D, DTS:X and IMAX Enhanced, with 16-channels of balanced and unbalanced output. Both models offer a full complement of inputs for connection to the latest audio/video components, including 7 HDMI 2.0b inputs that fully support 4K UHD and HDR playback. The new Maestro Series processors house the very latest in audio and video processing technology, featuring Dirac Live room correction with bass management to overcome acoustic anomalies in any space, ESS Sabre DACs that ensure unprecedented levels of detail and clarity along with earth-shaking, authoritative bass response. Enthusiasts will enjoy easy-to-use app-based control, Google Cast, Airplay 2, aptX Bluetooth and Wi-Fi streaming connectivity options, and integrators will appreciate the highly intuitive web-based configuration along with control drivers for popular smart home platforms. All of this outstanding technology has been wrapped quite elegantly within a completely new industrial design, distinguishing AudioControl's home cinema preamp/processor lineup from any other solution.

Concert Series Audio/Video Receivers
AudioControl's new Concert Series of immersive audio/video receivers is comprised of three models; the Concert XR-8, Concert XR-6 and Concert XR-4. All three models are packed with advanced cinema technologies, such as Dirac room correction and all of the popular surround formats that bring every cinematic experience to life. The Concert XR-6 and Concert XR-8 also add AURO 3D, one of the most sought after immersive formats available to consumers. Enthusiasts will also appreciate having six channels of user-configurable outputs, ideal for high-pass channels, additional subwoofers or height channels – whatever the room requires to optimize the movie experience. The Concert Series AVRs feature a stunning industrial design as well as 16-channels of output, integrated web-based configuration, intuitive app-based control, Google Cast, Airplay 2, aptX Bluetooth and Wi-Fi streaming connectivity so that they can become the perfect entertainment hub for everyone in the home.

Always There for Integrators with the Finest Solutions Available
AudioControl has a 40-plus year history of creating award-winning Made in USA products for integrators and backing them up with superior customer service as well as a 5-year warranty. Engineered and manufactured in the Pacific Northwest, these newly unveiled theater processors, receivers and amplifiers are prime examples of best-in-class, innovative product designs from AudioControl.