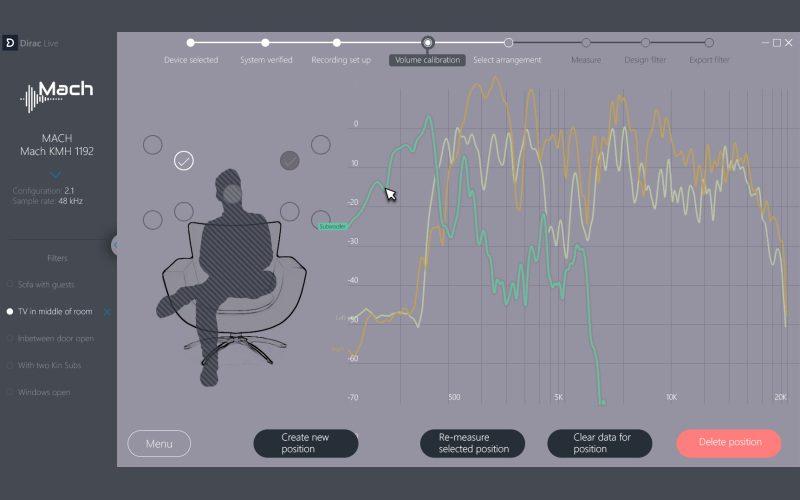 If we have one beef with Dirac Live room correction ’round these parts, it’s that the software can be a little daunting for first-time users. Slap a new UI on the software and call it a day, and we’d be tickled pink. But in its latest version, Dirac Research is going way beyond that. The new Dirac Live 2.0 not only features a much more user-friendly interface; it also promises to deliver significant performance improvements, especially in the area of phase correction.

Full details can be found in the press release below, and if you’re currently a Dirac Live user with an Arcam, Lexicon, Audio Control, or NAD AVR or pre/pro, you’ll find a link to the beta signups at the bottom of this story. Other manufacturers, including Emotiva, should follow at some point in the near future.

According to Niklas Thorin, Dirac’s General Manager of High Performance Audio, the beta version of new Dirac Live offers an upgrade in UI design, system setup, and technical performance. It will be demonstrated at CEDIA 2018 in September at Dirac Research Booth 2530.

“Dirac Live has served as the industry’s reference room correction solution since it was first unveiled over five years ago,” stated Thorin. “It established a new standard in room correction technology and allowed home theater systems to achieve a new degree in acoustical perfection. However, new UI design and technical advancements have inspired us to reimagine the Dirac Live solution for its second generation – combining the brilliance of the first-generation solution with recent market developments to usher in a new era of Dirac Live. We look forward to showcasing its beta at CEDIA 2018!”

The new Dirac Live includes improved usability with a refreshed, modern user interface that features a simplified setup procedure. This new version shifts the UI from a fairly technical process requiring a substantial base of knowledge to one where the highly-intuitive app helps the user ensure everything is being done correctly. This is achieved through a more guided process that confirms the correct actions are being taken and the optimal settings are being implemented.

In addition to the usability upgrades, the new Dirac Live also includes an enhanced phase correction algorithm for improved stereo reproduction. Where the previous version of Dirac Live individually measured the phase of each stereo speaker, this new version also analyzes speakers in pairs, which ensures that the pair’s phase responses are matched to each other.

The new Dirac Live is now also built in a way that will allow users to customize the platform with “Dirac Live Modules.” Each module, introduced on a roughly yearly basis, will offer a unique piece of room correction functionality that allows users to customize their solution based on their specific requirements and market applications – be it home theater, stereo, professional studio, and/ or automotive.

“Our modular approach to the future of Dirac Live will allow our platform to forever be equipped with the last and greatest in room correction functionality,” continued Thorin. “As new features are developed, we can efficiently deliver them to the market as ‘Dirac Live Modules’, so users can customize their platforms based on individual requirements and use-cases. Home theater systems aren’t one-size-fits-all so neither should be their room correction solutions.”

The new Dirac Live now also includes multi-language support feature for Spanish, French, Mandarin, Japanese, and Swedish, along with all-new mobile compatibility that provides users with increased flexibility in terms of which device they use for set-up – be it a laptop, tablet, or smartphone.