How often do you watch TV and browse you tablet or laptop at the same time? You're doing it right now? So are a lot of people- it's known as a "second screen" because it might not be your main... 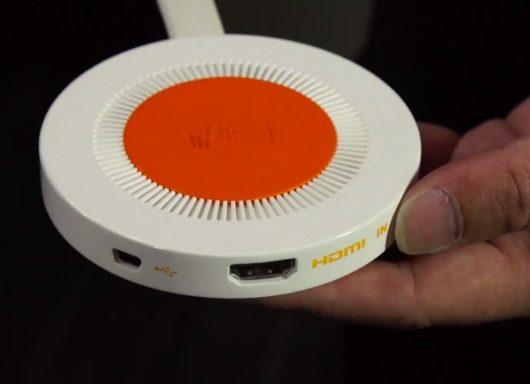 How often do you watch TV and browse you tablet or laptop at the same time? You're doing it right now? So are a lot of people- it's known as a "second screen" because it might not be your main focus, but its still being used. InAIR hopes to change that by putting the info that would normally be on the second screen on the main screen- the television. InAIR is a set-top box that connects to your TV and pulls data from the web based on what you are watching. If you are watching a football game, for example, you could pull player stats, the team's record, or be given links to team apparel stores.

Nowadays, many people browse the web at the same time that they're watching TV – the phenomenon is called the "second screen." But a new gadget called InAIR from a startup called SeeSpace wants to bring our attention back to just one screen by putting the best of the laptop, the smart phone, and the TV all together in one place.

InAIR, which is set to cost $99, works by plugging directly into any television through its "smart" HDMI cable that then connects to a set top box. The device then pulls data from the currently playing television program or movie, parses it using natural language processing and other patented technologies, and presents related content pulled directly from the web and social media on the television screen. The user interacts with the InAIR by using a simple mobile app, or through gesture control by incorporating the Microsoft Kinect – giving the possibility for the Minority Report experience to come to life.
It's a simple to use and compelling product that's caught the imagination of the crowdfunding community, raising more than $158,000 out of an original $100,000 goal on Kickstarter.
With less than 42 hours left in the funding campaign, we asked SeeSpace's founder and CEO Nam Do to come by TechCrunch headquarters to give us a firsthand look at the InAIR experience and talk a bit about how it works. Check that out in the video embedded above.