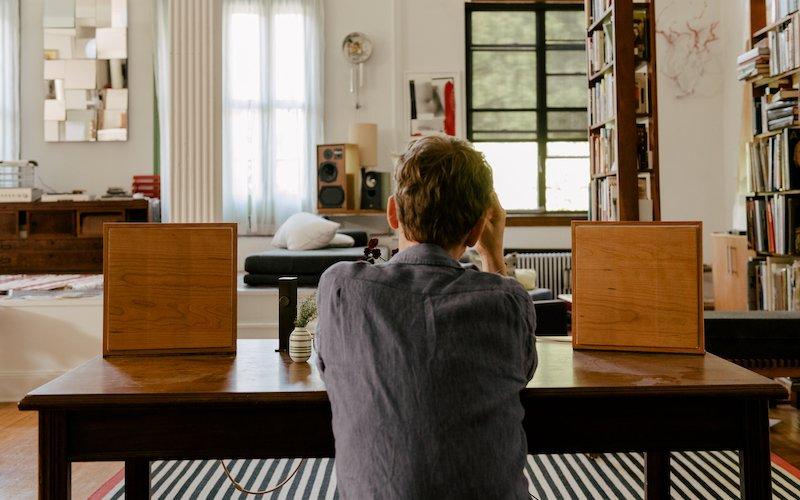 The pandemic has had a huge economic impact on the live performance industry, but fledgling speaker company Oda may have a solution. The brand has announced its first product, the Oda System, a pair of Bluetooth-equipped speakers and a receiver designed to stream a subscription-based weekly live performance by one of Oda’s Artists in Residence or Weekend Performance Artists. The system includes a set of Oda speakers and an Oda Lighthouse receiver that can also play music from the listeners’ own libraries via Bluetooth or 3.5mm cable. The system can also be controlled through Oda’s iOS or Android app. An Oda membership ($79/season) is required to access live performances. The Oda System retails for $399, but is is available now for pre-order at $299, with delivery expected in January 2021.

Keep reading for more information about the new Oda System:

Introducing Oda, a set of home speakers that create an unconventional live music experience in your home. With seasonal programming from more than 20 artists per season, Oda was made with the goal of creating a sustainable economy for performing artists and musicians. Members will experience original commissions, collaborations and experiments by some of the world’s most compelling creatives and storytellers. All Oda performances are a one-time unique live event, accessible only through the speakers, and will challenge what a performance can be.

Oda speakers act as the instrumental partner to communicate the artists works and bring them into your home as guests. Today marks the pre-sale of the speakers alongside the lineup and membership sale of the Season One “Winter” and Season Two “Spring” which will feature Don Bryant & Ann Peebles, Arca, Madlib, Beverly Glenn-Copeland, Jessica Pratt, Pastor T.L. Barrett, Terry Riley, Standing on the Corner and more. Season One is set to open on December 21, 2020 and close March 20, 2021. Complete lineup for Season One & Season Two and pre-sale information below.

“We made Oda because live music is a vital part of our lives. We believe all of us should be doing our part to preserve the cultural value of music. Artists are increasingly subjected to unfavorable terms, yet they continue to give us music of life-affirming quality. We’re just trying to build something positive. And our secret mission is to make you listen carefully. If you truly listen, everything will be fine.” – Oda co-founder Nick Dangerfield

Oda artists desire a more personal connection with their audience. Sonic explorers, storytellers and those unable to perform outside their own home are presented with an experimental space for new modes of performance: your living room. Every weekend Oda will broadcast a series of performances by a single artist, while during the week, you’ll hear scheduled performances along with unscheduled and surprise guests, with resident artists performing at various intervals throughout the season. In the end, the artist owns the recording. In between performances, the Oda Speakers will transmit a continuous live high-quality stereo sound from specific locations around the world from a bird sanctuary in Costa Rica to New York’s Tompkins Square Park. You can also play your own music as with any Bluetooth speaker.

While the programming will always be varied, one of Oda’s pillars is to support the elders. With less digital literacy and presence online, among many other obstacles, they are at the greatest disadvantage right now. Oda gives musicians the opportunity to perform from their home, helping them continue to share their passion and music. Oda works with the artists to ensure the highest production quality for every transmission. We have a remote live engineer on deck for every performance.

“There’s another kind of concentration when you’re performing in this way. You’re sending it out and the hope is that your honesty is translating. I find that the writing, the music, all of it is enhanced in another kind of way, and it requires delving deeper into the work. It’s exciting to learn something else about yourself as an artist.” – Marjorie Eliot, celebrated New York jazz icon

Oda was founded in 2016 in response to the need for an intimate, personal line of communication – artist to listener, and artist to artist. The catalyst for Oda was born when the artist Phil Elverum (the Microphones, Mount Eerie) announced he wouldn’t be touring in 2016, due to personal circumstances. As a fan, Oda’s founder Nick Dangerfield (whose background is in creating tools for artists) offered to build 50 speakers that would be connected to an app on Elverum’s phone. Whenever he had time, he could play his fans a song live, and it would broadcast in their homes. Oda was built by a community of instrument makers, creatives and curators committed to an environment of focused listening and communication of art, it’s without the noise of the infrastructures we have become accustomed to both digitally and physically.

“Oda was born as a solution to allow musicians to perform live from their home and studio, and envisioned as an additional revenue stream, and new creative challenge,” stated Dangerfield. “The intention was never to replace touring or live music, but quite the contrary: the dream was always to bring more live music into our lives. We promise to bring you a varied, world class program of live music performance throughout the week.”

While developing the Oda system, Dangerfield met Perry Brandston, and together they reimagined what Oda could be. Brandston, a sound artist, grew up working in New York institutions like Fillmore East and CBGB, eventually building design systems for clubs such as Save the Robots and working with David Mancuso (The Loft) as well as Giorgio Gomelski (Red Door). Benjamin Zenker of the University of Dresden, a world-leading acoustician, took Brandston’s design and transformed Oda into one of the best sound systems in its class. His reimagining rejects heavy audio filters and brings listeners an honest experience. Inspired by classical musical instruments, Oda is made of simple materials: wood, glass, steel, & cotton. It feels human, not technical.

“You can almost touch the sound, the sound touches you,” commented Brandston. “Cellos make sound the same way. They do exceptionally well in the expressive range of music. A sound that’s dimensional. A sound that makes it feel like the artist is just inches away from you. It’s about the living, breathing presence of musicianship over the robotic hardware of audio reproduction.”

Furniture and fine art designer Anna Karlin lent her expertise in creating the Oda Lighthouse, which operates as the “On-Air” signaling structure. The programming is led by Kristen McElwain, formerly of Red Bull Music Academy. Dangerfield’s vision was further expanded when entrepreneur Alexis Ohanian came on board as the lead investor.

“As a big fan of music from many different genres, I invested in Oda because of their innovative vision in reimagining how we experience live music through new technology – and how inclusive they are with artists from all walks of life,” said Alexis Ohanian, investor and co-founder of Reddit. “I was blown away after my first live listening experience – the Oda speakers create such a transcendent, intimate feeling that brings the music and the artist to life.”

An accompanying Oda App will keep you informed on schedules, volume control, and much more. Oda will never play ads or sell your data. The Oda system doesn’t have a microphone, and they can’t listen to you. In advance of every season, all members will also get a printed program.

Oda also partnered with Wieden+Kennedy, an independent global creative agency, to help create the brand’s identity and the launch campaign, including a series of animated films scored by Eli Keszler and Nate Boyce. Oda is live.

Oda is available for a promotional presale price of $299 and $79 for seasonal membership at Oda.co. After the first 1,000 units are sold the list price will be $399. Each run of the Oda system will be produced in a limited number of units. Oda cares about creating a sustainable platform for artists, and membership pays for meaningful performances fees to participating artists and crew.