Besides being a year when too many fine musicians joined the angel band, 2016 could be called the year of the earphone. Unlike a few years ago when choosing a good-sounding, well-made, comfortable, mid-priced earphone was a case of choosing... 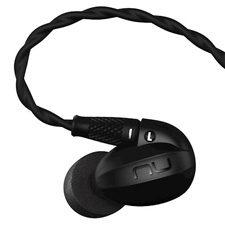 Besides being a year when too many fine musicians joined the angel band, 2016 could be called the year of the earphone. Unlike a few years ago when choosing a good-sounding, well-made, comfortable, mid-priced earphone was a case of choosing the lesser of two evils (or Weevils if you’ve seen the film Master and Commander), nowadays I can think of over a dozen in-ears priced between $500 and $1,000 that I would be happy to have ensconced in my ears.

The new Optoma NuForce HEM8 in-ear monitors ($499 MSRP) were among the in-ears vying for my ear-time recently. From the moment I saw the packaging, I could tell that Optoma NuForce was serious about challenging the universal-fit in-ear status quo. The outer box alone has enough technical info about the HEM8’s design to fill a page or two (it’s printed in what I suspect is four-point type). There’s also a very slick exploded image of the HEM8 with all the parts numbered and described in detail. Inside the outer box is a cloth-covered presentation box that unfolds to reveal a clear-topped, lock-down, plastic, water-proof Pelican-style case with the in-ears, tips, cables, and a reinforced cloth travel case inside. The insides of the foldout case are even decorated with pictograms of how to use the HEM8 correctly. From the packaging onwards, it’s clear that Optoma NuForce tried to do everything they could to make sure potential purchasers recognize their commitment to quality.

The HEM8 has four Knowles balanced armature drivers in each earpiece. With a high sensitivity of 124 dB and a 32-ohm impedance, pretty much any playback device should be able to easily drive the HEM8. If you want to blow up the HEM8, you will need to deliver more than 2 mW. At that point the HEM8 would be producing 122 dB SPL, which should, if you are a normal human being, deafen you.

The use of four drivers in each earpiece requires some sort of crossover to handle the hand-off from one driver to the next. The HEM8 uses something the company calls a “linear-phase crossover.” According to HEM8’s informational materials, the patent-pending crossover is “an innovative phase linear mechanism in the form of a first-order Butterworth crossover design chosen to distribute frequencies and maintain the sound in the correct phase at all time.”

The HEM8 has a removable cable connection and comes with two cables: one is a high-performance braided design without an inline remote, while the other is a single wire with smart-phone controls. The connection scheme at the earpiece is a two-point connection that pushes onto the earpiece. As long as it is pushed in all the way, the connection scheme works well, and its small footprint prevents it from rubbing against your ears. 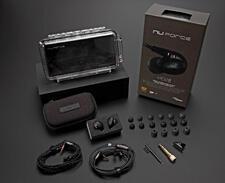 Ergonomic Impressions
The HEM8 comes with five pairs of silicon tips in five different sizes, as well as two pairs of Comply 100 series compressible foam tips. With this array of choices, it should be relatively easy for most people to obtain a good fit. Since the HEM8 is so light (weighing 0.2 ounces), once you do get a good fit and loop the cables over your ears, the in-ear monitors will stay in place regardless of how much you move your head. I spent a good deal of time with both the large Comply and large silicon tips and found that each had its advantages. The Comply tips stayed in place much better than the silicon ones, but I felt the Comply tips’ sound was slightly darker with less treble sparkle than the silicon tips. I suspect the sonic differences stem from the fact that the silicon tips get the HEM8’s barrel closer to your ear canals than the Comply tips do.

After a couple weeks of trial and error with the supplied ear tips, I still didn’t feel I had found the best solution for my challenging-to-fit ear canals, so I turned to a better–albeit pricier–solution. When I reviewed the Westone W-60 universal in-ear monitors, I ordered a pair of the Westone UM56 custom-fit ear-tips (about $170). I noticed that the Westone W Series and the HEM8 share the same diameter barrel stems, so I tried the UM56 tips with the HEM8. The result was a better fit and better sound than any of the supplied eartips. The custom tips stayed in place regardless of what I was doing (even chewing) and combined the best aspects of the stock silicon and foam eartips. I noticed with the supplied tips that the bass extension was somewhat limited and the midbass was a bit thick. With the UM56 tips, however, the HEM8 gained low bass extension, as well as a more open and extended treble region. That is what I call a fit win/win.

Occasionally when I would first put the HEM8 in my ears, I found the right channel was dead. Pushing the cable more firmly onto the HEM8 capsule always solved the problem. I tried a second sample of the cabled cord to see if there was defective cord issue, but I experienced the same occasional signal loss. As long as the cable was pushed in before putting the IEM in my ear, it worked with no signal loss.

This was the second HEM8 sample I used during the review. I destroyed the first pair when I pulled them abruptly out of my ears due to an excessive volume setting on a player, and the right capsule struck my desktop hard. That killed the HEM8’s right capsule instantly, so I don’t recommend doing that.

My other ergonomic complaint could be called nitpicking, but I would have liked to see more definitive markings to determine the right from the left capsule. The white L and yellow R markings are really small, faint, and not easy to find. Although not as nearly unreadable as the tiny R and L embossed on the black cable of the new Etymotic ER4 SR and ER4 XR, a more definitive marking system would be a welcome revision.

Sonic Impressions
With any in-ear monitor, whether it costs $20, $200, or $2,000, you will never know how they sound until you get an optimal fit. With the HEM8, you need a fit that that seals your ear canal completely. Unless you get a complete seal, the HEM8 will not serve up the bass or the imaging that it is capable of delivering. As I mentioned, to get that fit I needed to use the Westone UM56 custom-fit tips on the HEM8. All my sonic impressions are based on this combination.

With a proper fit, the HEM8 delivered excellent noise isolation. Although Optoma NuForce didn’t supply an isolation specification, I suspect the HEM8 deliver approximately 25 dB of isolation, which is enough to make most external noises vanish. The downside is that, if you wear the HEM8 out in the world, you will not hear that truck until it hits you.

The HEM8’s soundstage size was not as expansive as I’ve heard from some multi-driver in-ears, such as the Jerry Harvey Layla, but it did allow for good image specificity within the soundstage and a reasonable sense of depth and layering. Space between instruments was not as great as what I hear through the Ultimate Ears Reference Remastered, but the edges that defined their locations were just as distinct.

The HEM8’s overall harmonic balance leans toward the rich, warm side of neutral, which makes it a better match with some of the more matter-of-fact players, such as the original Astell & Kern AK100. Due to its higher sensitivity and low impedance, the HEM8 mated nicely with my iPhone 5 and iPod Classic 160, so that even with these devices the HEM8 displayed good dynamic contrast and impact. My only complaint when using the iDevices was that there was a bit more midbass and less low bass than with other portable sources, such as the Onkyo DP-X1 player.

While the HEM8 in-ear monitors are certainly capable of producing low bass, they need two things to do so. First you must have a fit with a good seal and no leakage. Second you must have a source capable of producing low bass. Even when using the Westone UM56 tips, I found that occasionally I had to make minor adjustments to ensure that I was hearing all the bass that the HEM8 was producing. When the IEM fit properly, I was impressed by the low-bass resolution and extension.

High Points
• The HEM8 produces detailed and highly resolved sonics.
• The HEM8 fit can be very comfortable.
• The HEM8 accessories and packaging are first-class.
• The HEM8 has a slightly warm harmonic presentation. 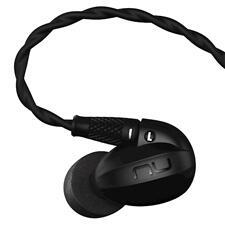 Low Points
• The markings on the right and left capsules are hard to see.
• The cable connection is intermittent if not pushed in firmly.
• Getting a perfect fit can require some experimentation.

Comparison & Competition
Compared with the more expensive universal-fit Westone W-60 ($999 MSRP), the HEM8 does not produce as large a soundstage. Using the same eartips with both the W-60 and HEM8 gave them a more level playing field, but the W-60 still produced more low bass, a larger soundstage, and greater dynamic contrast compared with the HEM8.

I recently received a pair of the Etymotic ER4 XR in-ear monitors ($349 MSRP). The ER4 XR has a very different fit, ensconced deep into the ear canal with its triple-flange tips. It’s a fit people either love or hate. The HEM8 doesn’t insert as deeply, which gives it a less invasive feel. Sonically the ER4 SX has a slightly smaller soundstage, but within the soundstage the imaging is more specific and detailed. Low bass was more extended and impactful through the ER4, but only when the in-ears were firmly seated deep within my ear canal. The ER4 SX also delivered more isolation from outside noises.

Conclusion
I spent more time with the HEM8 review than usual because I could not get a handle on this in-ear monitor’s true potential until I got a good fit. For me, that proved to be more challenging than just picking the best option from the supplied ear tips. Since I have challenging-to-fit ear canals, I suspect that most prospective users will not have as much trouble as I did getting a good fit. But if they do, going with the Westone UM56 tip option will deliver an almost CIEM-level fit.

When considered as a whole package with all of the accessories, it’s obvious that the Optoma NuForce HEM8 is a high-value product that should deliver years of high-fidelity service.