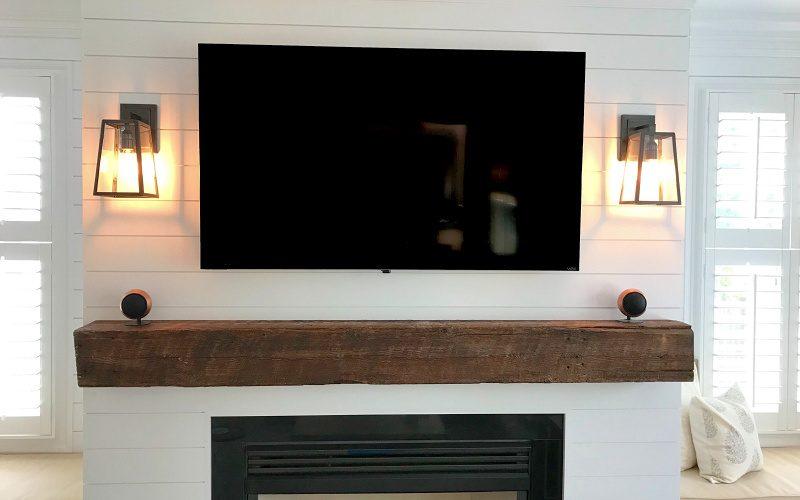 Is it just me, or are TV and movie sound engineers actually getting worse at making dialogue easily discernable in their productions? Even if your hearing is more acute than mine, I'll bet we've shared the same experience: You sit...

Is it just me, or are TV and movie sound engineers actually getting worse at making dialogue easily discernable in their productions? Even if your hearing is more acute than mine, I'll bet we've shared the same experience: You sit down to watch something, set what seems like a comfortable initial volume level, and then find yourself constantly turning it up as you watch... especially during heavy dialogue scenes and sometimes right up until the final credits roll.

I've been able to avoid doing that since I began auditioning a component system from Orb Audio called Booster1. It has a feature called "EZ Voice," which Orb says uses a proprietary algorithm to boost the midrange frequencies that most movie and television dialogue occupies. Pressing a single button to activate the EZ Voice equalization will "isolate, clarify and enhance dialogue," according to Orb.

That kind of claim invites skepticism, but guess what? It works. Turn it on and off a few times while Titus Welliver's titular character is droning like a seventh-grade math teacher during Amazon Prime's Bosch and two things are likely to happen: You'll leave EZ Voice on most of the time, and you'll wonder why you ever needed subtitles to understand Welliver. I've fiddled with the settings on other soundbars, but never got the dialogue to sound as distinctive as it did using EZ Voice.

Although referred to as such on Orb Audio's website, the Booster1 really isn't a soundbar by definition or appearance. At least not a conventional one. Even Orb co-owner Ethan Siegel describes the Booster1 as "more sound, less bar." But since soundbar sales are soaring (the category resonates with consumers and factory-level sales exceeded $1.5 billion last year, with 18 million units shipped) Orb decided to package its distinctive and acclaimed speakers with other components and call the packages soundbars.


There are three such offerings. The $579 Booster1 that I reviewed consists of a pair of Orb Mod1 speakers with basic tabletop stands; a subMINI dual-port subwoofer; a tiny (5-inch wide, 4-inch deep and 1.5-inch tall) Booster 2.1-channel integrated amplifier; and a universal IR remote about the size of a Zippo lighter. The $349 Booster Basic eliminates the subwoofer. The $779 Booster2 replaces the Mod1 speakers with a pair of Mod2s, which are essentially two Mod1s wired in parallel and mounted on a single, simple stand.

Do any of those combinations of components seem like a soundbar to you? My first impression while unboxing the components was "Who are they trying to kid? I can call my Ford a Ferrari, but that doesn't make it one." The 4.19-inch diameter sphere that is the Mod1 looks more like a Bocce ball than any speaker I'd ever seen.

Despite not looking anything like a conventional soundbar, Orb Audio's Booster systems check off all the boxes that have made soundbars so popular with consumers:

Firstly, it boasts a space-saving design. When televisions were primarily big, bulky boxes, it was OK if good sound required the same. But flat-panels that can be hung on a wall like a painting changed consumer expectations. So, manufacturers began building relatively compact cabinets that resembled snake coffins and stuffing them with an amplifier and several speakers. 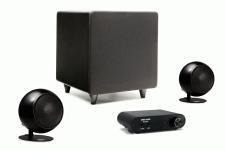 The Booster systems consist of several components instead of a single box. But Orb Audio's diminutive amplifier and compact speakers occupy less total space than most decent, conventional soundbars. The speakers are inconspicuous, whether hung on a wall or perched on a small TV stand. And although the amplifier isn't designed for wall-mounting, it's only about half the size of a hardcover book. It's difficult to imagine anyone lacking the room to place it near a TV.

Secondly, Booster1 delivers on the promise of ease of installation. The average consumer doesn't have an engineering degree and often lacks the patience to figure out how to run and connect a bunch of cables to a bunch of components and speakers. Soundbars can require as little as two cables: A power cord and an HDMI cable connected to the TV's Audio Return Channel (ARC).

Setting up the Booster1 takes a little more than that, but not much. Connect the Orbs to the amplifier using color-coded, twin-lead speaker cables; connect the amplifier to the TV with an optical or 3.5mm minijack cable, and connect the subMINI to the amplifier by plugging a coaxial cable into its respective RCA jack. All of the cables are included. Simple, step-by-step directions also are provided. The biggest challenge most users will face is getting the 3/8-inch bare end of the speaker cable into the large wire holes on the spring-loaded, gold-plated speaker terminals.

Thirdly, operation of the system is super straightforward. Granted, some HTR readers may actually enjoy operating an A/V receiver--turning it on, choosing the correct input, selecting the optimum audio codec for your source material and tweaking equalization and speaker balance. But if you're lucky, asking your significant other to do the same might simply result in a furrowed brow and puzzled look. The less fortunate will have to duck quickly to avoid the remote hurtling toward their head.

Consumers love soundbars because they're easy to use. So is Orb's Booster1. The amplifier has one analog volume knob, two buttons (Power and Input), and four tiny LCD indicator lights that you can pretty much ignore. The IR remote has six buttons: power on/off, up and down volume, mute, input, and EZ Voice. Look up "simplicity" in the dictionary, and it wouldn't be surprising to see a picture of Orb's Booster1.

About the only thing that would be easier is if the Booster amplifier had an HDMI input and CEC capabilities so that it turned on with the TV and used its volume controls. I could have programmed my universal remote to work with Orb's amplifier but I was too lazy, and the simple, convenient little remote rewarded that laziness with its ease of operation. Once I'd used it a few times, I didn't even have to eyeball it to hit the buttons I wanted to use.

Now that we've established that Orb Audio has earned the right to call its system a soundbar even if it looks nothing like one, let's discuss why it's actually better than most conventional 2.1 soundbars. The answer lies in those spherical little magnetically shielded speakers, otherwise known as Orbs. The heart of each Orb is a single, 3-inch, aluminum driver with a rare-earth Neodymium magnet. Orb Audio boasts that its speaker shells are made of American steel and assembled and hand-finished in the U.S. Orbs come in six different finishes. Gloss Black (like my sample) or Pearl White are included in the Booster1's $579 price. Hammered Earth, a textured copper color, costs $30 extra per pair of Mod1 Orbs. Hand Polished Steel and Antiqued Copper or Bronze will set you back an additional 60 bucks a pair.


The Orbs sound as good as they look, in part because they're not confined to a typical soundbar's 36- or 40-inch box. I placed each Orb at a corner of my 55-inch TV stand and they delivered better stereo separation than most conventional soundbars in their price range. They also excelled in clarity, imaging and accuracy. The Orbs have a rated frequency response of 120 Hz to 18 KHz on their own, and the bass will extend down to 50 Hz when the 50-watt, 9-inch cube subMINI is added to the audio equation.

The subMINI didn't deliver the concussive bass I often enjoy with larger, more powerful subwoofers. Yet the bass never felt thin, and although I never actually felt the explosions in movies such as The Meg, neither did I feel as if the subMINI's capabilities were diminishing my enjoyment of the movie in any way.


And when it came to music, the subMINI's tight bass was easy to appreciate. Listening to the CD soundtrack from The Beatles' Love album, I couldn't get over how great--and loud--a small sub and two teeny speakers driven by an equally wee 25-watt amplifier could sound. Even with just two speakers, the soundstage was expansive enough to almost make me feel as if I was in the theater at the Mirage in Las Vegas, watching Cirque du Soleil perform.

Comparison and Competition
Any conventional 2.1 soundbar could be considered the Booster1's competition, but substantial 1-to-1 competitors with a similar configuration are exceedingly rare. The discontinued Paradigm Shift Millenia Compact Theater System comes close, but it lacked an HDMI ARC port.

The same goes for the numerous self-contained 2.1 computer speaker systems on the market, which may allow you to connect stereo analog audio, but rarely included digital, much less HDMI, connectivity.

You could, of course, also buy one of any number of two-channel AV receivers popping up in the marketplace as of late and add two speakers and a subwoofer of your choice, but that doesn't quite count since it complicates the control situation a litte.

Conclusion
Open the Orb Audio Booster1's shipping boxes, pull out the petite pieces, and there's a good chance you'll at least momentarily wonder what you got yourself into when you ordered Orb's soundbar-without-a-bar. The Booster1 is that unconventional.

But once you set it up, you'll realize that not conforming can be a good thing.

Being able to move the Mod1 speakers around to get the best stereo separation and most expansive soundstage might make you wonder why more audio component manufacturers aren't offering similar setups. You'll also wonder why more haven't been able to deliver a true dialogue-enhancing equalizer similar to Orb's EZ Voice.

You'll have to give up things, like CEC control and discreet surround sound, to enjoy the Booster's audio advantages, but if you're as baffled by muddy dialogue as I am, there's a good chance you'll happily accept the tradeoff.

You'll automatically be entered in the HTR Sweepstakes, and get the hottest audio deals directly in your inbox.
Subscribe
Connect withD
Login
Connect withD
1 Comment
Oldest
Newest Most Voted
Inline Feedbacks
View all comments
HomeTheaterReview Rating
Value:
Performance:
Overall Rating:
Check Product Price
This is the static ad content. This is just a placeholder for now to get things styled.
Visit Website