Outlaw Audio's Model 7075 seven channel amplifier claims to pack a lot of power and performance in a relatively small package. Andrew Robinson tests out the amp to see how it measures up against its claims. 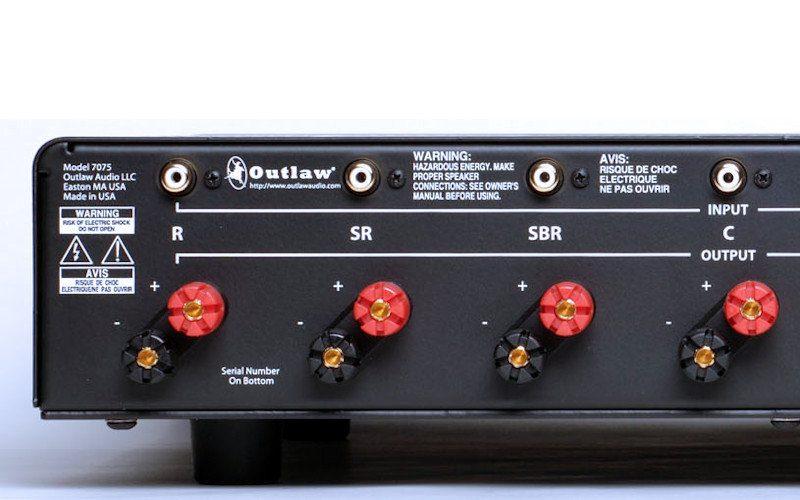 Just because your home theater may be located in a small room or be comprised of modest equipment doesn’t mean you have to power it with a mass-market AV receiver. Home theater separates (i.e. AV preamp/power amp combos) have long represented the best approach in achieving ultimate performance. However, this level of performance often comes at a price, both financially and physically. Enter the Model 7075 from Outlaw Audio, an affordable, space saving, multi-channel power amplifier aimed at the home theater enthusiast who is tight on both money and space.

The Model 7075 retails for $699 and is sold direct to the consumer via the Internet and Outlaw Audio’s own website. The Model 7075 is a compact beast measuring four inches tall by 17 inches wide and 15 and a half inches deep. While its short physical appearance may make you think it’s a lightweight – guess again, for the Model 7075 tips the scales at 41 pounds. The Model 7075 doesn’t look altogether flashy but it’s far from ugly – no, it’s a piece that should blend nicely with a wide range of AV preamps and/or AV receivers. In terms of power, the Model 7075 possesses 75-Watts across all seven of its channels into eight Ohms and 115-Watts into four. These are real world figures with all channels being driven simultaneously, full range and with less than .08 percent total harmonic distortion. In terms of input options the Model 7075 boasts seven RCA analog inputs as well as seven five-way binding posts capable of accepting all types of speaker terminations. The Model 7075 has a hard-wired power cord as well as a 12-volt trigger.

If you’re at all familiar with Outlaw Audio and the sound of their amplifiers, then you won’t be disappointed by the Model 7075 for it possesses largely the same signature as its more powerful and costlier stable mates. I say largely because there is a level of control and grip you’ll hear from, say, Outlaw’s 7900 amplifier that is obviously missing in the Model 7075. Now, that’s not to say that the 7075 doesn’t have control – it does – it’s just relative to its price and power output. That being said, if you mate the 7075 with speakers in the 93dB sensitivity range or better, you’d probably be willing to swear the Model 7075 was more powerful than its specs would have you believe. The Model 7075’s midrange is rich and full-bodied without sounding bloated or artificial in any way. The Model 7075’s high frequencies are smooth and largely grain-free with good extension though a bit rolled off at the extremes, which can be a good thing for a lot of budget gear tends to get a bit brittle up top when pushed. Bass is firm and deep with solid extension and detail. Dynamically, the Model 7075 again punches above its weight class and as a surround sound amplifier it’s a clear winner and worthy upgrade to any lower powered AV receiver – though at $699 retail you could pair the Model 7075 to a budget AV preamp and probably save some money, which is an uncommon concept when talking about AV separates. I’ve used the 7075 in both capacities, as an outboard amplifier to an AV preamp as well as a part of an amp/AV preamp combo and found its performance to be exemplary in both contexts.

Read about the high points and low points of the Model 7075 on Page 2. 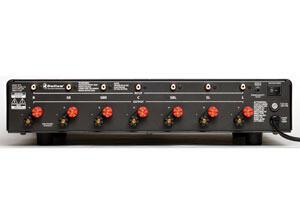 High Points
• The Model 7075 is easy on the wallet, your back and your ears, making it one of the better all-rounders that can be had for under $1,000.
• The Model 7075 is Made in America, further proof that we’re still capable of making worthwhile, lust-worthy products that compete – okay, beat – many overseas rivals.
• The Model 7075 is simple, easy to use and reliable, ensuring that your investment, even at $699, is sound.
• The Model 7075 is clearly aimed at home theater, but its two-channel performance is nothing to scoff at for it possesses a richness that is alluring and able to be enjoyed for hours on end without fatigue.
• When mated with the right speakers or when used in a smaller environment, the Model 7075 manages to sound bigger than its modest footprint would have you believe.

Low Points
• At 75-Watts per channel into eight Ohms, the Model 7075 isn’t going to be the go-to choice if your speakers are of the inefficient kind. Those of you with Maggies, older MartinLogans, Thiels or the like should look elsewhere in Outlaw’s lineup of products.
• It’s no surprise the Model 7075’s binding posts are a bit cheap, it’s to be expected in a $699 product, but their placement and plastics make connecting some speaker cables a chore.
• While you may be tempted to want to stack items atop the Model 7075 – don’t, for it can run a bit warm.

Competition and Comparison
There isn’t a lot of 75-Watt per channel multi-channel amps out there today, in fact I can’t really think of any off the top of my head. Fortunately the Model 7075 does compete favorably with amps possessing more power. In the right room with the right associated equipment the Model 7075 competes very favorably with amps such as Onkyo’s PA-MC5500, NAD’s T-975 and even Parasound’s Halo A52 in some respects. Of course many will wish to compare anything Outlaw makes, including the 7075, with Emotiva, though they currently do not offer a product that is comparable.

For more on these amps as well as other please visit Home Theater Review’s Multi-channel Amplifier page.

Conclusion
If you’re tight on space, money or both but still want to enjoy the finer things in life, at
least when it comes to your home theater, than I strongly urge you to check out Outlaw Audio’s Model 7075 seven channel amplifier. At $699, sold Internet-direct and made right here in the United States, the 7075 is the perfect addition to any AV receiver with preamp outputs or the first step towards an all-separates home theater system – just remember to bring the right speakers to the party or use in a small room.