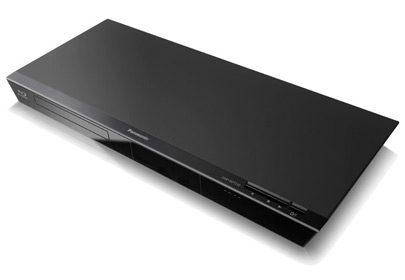 Adrienne Maxwell has a go with the Panasonic DMP-BDT230 Blu-ray player to see if the players lives up to what is expected of a modern Blu-ray player. Read on for her findings. 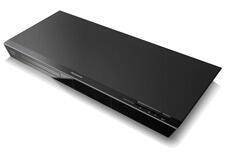 The DMP-BDT230 has a fairly small form factor, measuring about 17 (L) by 1.5 (H) by 7.1 (D) and weighing just 3.08 pounds. The trapezoid shape and brushed black chassis give it a hint of style to distinguish it from your basic black box. The front panel includes a slide-out disc tray on the left side and a small alphanumeric LED screen on the right, sandwiching an SD Card slot and USB port in the center that hide behind a push-out panel. The backside offers digital connections only: one HDMI output and one optical digital audio output, as well as an Ethernet port for those who prefer a wired network connection over the built-in WiFi. The player lacks advanced control ports, such as RS-232 or IR. It offers both bitstream output and internal decoders for Dolby TrueHD and DTS-HD Master Audio. In the video realm, 24p output is supported (although it’s turned off by default), and the menu includes access to some advanced picture adjustments, like the ability to choose between preset picture modes or go with a user mode in which you can adjust contrast, brightness, sharpness, and color. The player also offers 2D-to-3D conversion for a simulated 3D effect with 2D content.

The new Blu-ray menu design is a visual improvement over previous Panasonic players. The Home menu now features five options arranged in a cross shape, with Setup in the center and icons for Network, Photos, Music, and Videos surrounding it. The “Multi User Mode” feature allows each user to customize the Home page with his/her own wallpaper and photos, and you can actually set up different A/V parameters per user. Hit enter on the Home page to access the Setup menu to adjust these parameters, or use the directional arrows to scroll up/down/left/right to get to dedicated screens for the various network, music, photo, and video options. I like the menu’s look, but I found navigation and functionality to be sluggish, especially in the area of Network services. When I navigated to the DLNA area of the Network menu, the player did locate the Samsung AllShare and Plex DLNA clients I use, but it was very slow to browse and cue up the content. DLNA file support is somewhat limited; supported video and photo formats include AVCHD, MPEG4, MPEG2 (PS and TS), and JPEG. Audio file support is a little better: MP3, AAC, WMA, PCM, and FLAC. Given the sluggishness of the DLNA function, I preferred to play media through the SD Card slot and USB port. MKV is supported via disc and USB.

The Network menu is also where you’ll find the VIERA Connect Web platform. This player does not use the redesigned VIERA Connect interface we see on this year’s HDTVs; rather, it uses the older multi-page design that includes nine large icons per page. The major services are represented, including Netflix, Amazon, YouTube, VUDU, Hulu Plus, and more. Additionally, you can access the VIERA Marketplace to add new services. A Web browser is available, but it does not support Flash.

The supplied IR remote has the same basic look and layout as previous Panasonic Blu-ray remotes, but the company has changed some of the button functions. Buttons for Netflix and Home now get prominent positions, Top Menu and Pop-Up Menu have been combined into one button, and the basic Menu control has been moved to an onscreen-only function that you must access through the Options button. In general, the remote works well. The player responds very quickly to IR commands, and the range is good. Several times, when using the remote’s dedicated Netflix button to launch the service, the player froze up on me; I had to unplug it and restart. When I accessed Netflix directly via the VIERA Connect menu, it never froze.

Panasonic has not yet introduced an iOS/Android control app for this year’s Blu-ray players. Given that it’s already July as I write this, I’m not sure if they plan to do so. I tried the Blu-ray 2012 iOS app, and it did not work with this new player. The DMP-BDT230 does support Miracast, which allows you to connect the player with compatible smartphones and tablets over WiFi Direct and display the mobile device’s screen. I did not have a compatible product to test this.

The DMP-BDT230 powers up and loads discs very quickly, and I didn’t encounter any freezes or stutters during disc playback. The player passed all of the 480i/1080i processing tests on the HQV Benchmark DVD and HD HQV Benchmark Blu-ray disc (Silicon Optix). For the most part, it cleanly rendered my real-world DVD scenes from Gladiator (DreamWorks) and The Bourne Identity (Universal), producing only an instant of moiré in both scenes before it locked onto the 3:2 cadence. The more expensive OPPO BDP-103 produced a bit more detail in the upconversion of SD DVDs and rendered the HD Luma Zone Plate and Chroma patterns on the Spears & Munsil HD Benchmark disc more accurately. Still, for its price, the DMP-BDT230 proved itself a good performer for both Blu-ray and DVD playback.

Read about the high points and low points of the Panasonic DMP-BDT230 on Page 2.

Competition and Comparison
Compare
the Panasonic DMP-BDT230 with its competition by reading the reviews
for the Sharp BD-AMS20U, Yamaha BD-S473,
Samsung BD-E6500,
and Sony BDP-S185.
Learn more about 3D Blu-ray players by visiting our Blu-ray Players
section.

Conclusion
The DMP-BDT230 hits the major points we
look for in a Blu-ray player: good A/V performance, good speed and
reliability, and a good assortment of features for its $120 asking
price. I encountered a few ergonomic issues that could potentially be
addressed through firmware updates: menu navigation could be sluggish,
DLNA performance was frustrating, and there’s no control app with a
virtual keyboard for easier text input. For those who don’t need 3D
playback, you might want to check out the lower-priced DMP-BD89, which
offers similar features for $79.99.