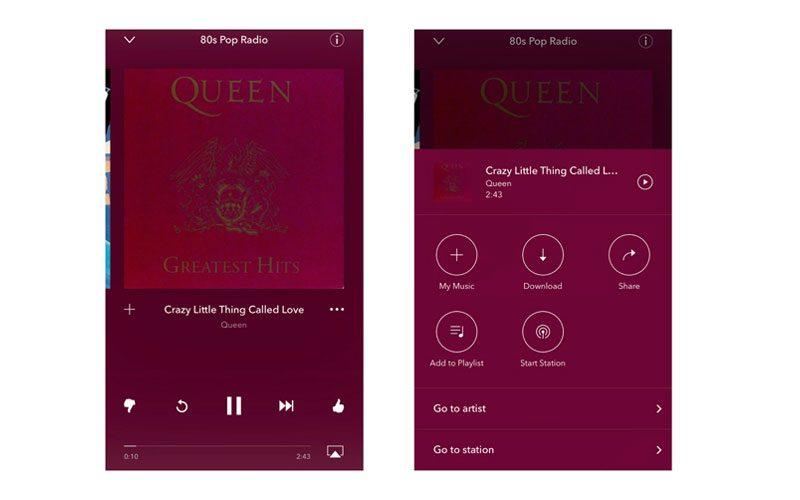 I have long been a fan of Pandora's free music streaming service. While I have apps for Spotify, Apple Radio, iHeartRadio, and Amazon Music on my iPhone, the Pandora app is usually the first one I launch when I want...

I have long been a fan of Pandora’s free music streaming service. While I have apps for Spotify, Apple Radio, iHeartRadio, and Amazon Music on my iPhone, the Pandora app is usually the first one I launch when I want to enjoy an extended listening session. That’s because I’ve always preferred Pandora’s algorithm when creating artist-inspired stations. If I create a U2 station, for instance, I think that Pandora does a better job than Spotify of picking other songs and artists that I’ll want to hear alongside U2. The algorithm comes from the Music Genome Project, and you can read more about that in this story.

When I want to hear a specific song or album, however, that’s when I turn to Spotify or Amazon Music … because the free version of Pandora doesn’t allow you to queue up a specific song or a full album. Essentially it’s on constant shuffle. Pandora’s step-up service, Pandora Plus ($4.99/month), removes the advertising you get with the free service, gives you unlimited skips, lets you repeat songs, and provides a higher-quality feed through the desktop app (192 kbps versus 64 kbps for the free mobile/web app), but you still can’t listen to the latest Lumineers album from start to finish.

Now you can, thanks to the introduction of Pandora’s Premium service. With Premium, Pandora is officially taking the fight to Apple, Spotify, Amazon, TIDAL, and other paid services. For $9.99/month, you get access to the genre- and artist-inspired stations for which Pandora is known, as well as the ability to find and play specific music by song title, album, or artist, create personal playlists, and download songs for offline playback. Pandora has also created a “My Thumbs Up” playlist where all of your favorites are saved automatically.

Pandora Premium launched back in March, and new users can enjoy a 60-day free trial (Pandora Plus subscribers can get a six-month free trial). Right now, the Premium tier is only available through the iOS and Android mobile apps–not the Web browser, desktop app, or Pandora apps on various streaming media devices. Those services will roll out over time. Even though the Premium service is not available through a Web browser, I was able to upgrade my existing free account through the Web interface. I signed up for the 60-day free trial and moved over to the iPhone 6 app to check out the new features.

Within the app’s settings, you can choose a quality level: low (32 kbps), standard (64 kbps), or high (192 kbps). (Some reports suggest that Pandora plans to move up to 320 kbps at some point.) I went with the highest quality setting. You can also decide whether or not to allow streaming/downloading over your cellular network or only via Wi-Fi to reduce data usage.

The iOS Home page has a simple single-column arrangement that scrolls down the screen, with various pop-up menus that let you go deeper into the playback and information tools. At the top of the Home Page are two main menu options: My Music and Browse. Below that you’ll find album art for recently played songs, which you can swipe to browse and tap to play. Then you’ll find a list of all the stations, playlists, and recent album/songs you’ve played, listed chronologically. You can narrow this list to show a specific category, like stations, playlists, or albums.

At the bottom of the Home page is a playback toolbar that automatically queues up the last list you played, so you can resume playback instantly with the push of the play button or expand the toolbar for more playback options. The playback page is designed to look and function a lot like Apple’s own Music interface, with album art, an elapsed time bar, play/pause, skip ahead, and thumbs up/down options. As with Pandora’s free service, the more feedback you provide through thumbs up/down, the more Pandora Premium can tailor future selections to your taste. Also, once you thumbs up a few tracks on a certain Pandora radio station, Premium will automatically create a new playlist of those songs to build upon. When listening to a song, you can press the “…” button to pull up a sub-menu where you can add the song to My Music, download it, share it, add it to a playlist, or start a new station based on it. Song lyrics can be displayed, if desired.

The Browse menu recommends content based on your likes–it highlights new albums from artists in your saved catalog, as well as stations, artists, and genres that it thinks you will like. For me, these recommendations were on the mark, an accurate reflection of the kind of music I’ve been listening to. While Pandora Premium doesn’t offer the curated playlists that Apple Music, Amazon Music, and TIDAL offer, Pandora has created an “Add Similar Songs” function that will add five songs at a time to one of your playlists, using its algorithm. In action, the feature proved to be hit-and-miss. It added some good choices to my Indie Singer-Songwriters playlist, but it completely missed the mark when adding songs my 80s Pop Radio playlist–Wonderwall by Oasis, Bitter Sweet Symphony by The Verse, and 100 Years by Five for Fighting hardly fit the bill for that one.

Overall, I liked the iOS interface and general user experience. It builds on the familiarity that users already have with free service and doesn’t require a lot of scrolling or button pushes to get where you want to go. It provides a little more customization (through the ability to show only specific categories) than you’ll get from some of the other services.

High Points
• The Premium service combines Pandora’s popular artist-inspired radio stations and music-selection algorithm with the option to listen to specific songs and albums.
• You can create your own playlists, and all of your “Thumbs Up” selections are saved automatically in one playlist.
• You can download many songs for offline playback. One button press will download a complete playlist.
• The Premium service offers better sound quality on mobile devices than the lower-tier services.
• The iOS app supports AirPlay. Chromecast is also supported via Android.
• If you are upgrading from the free or Plus service, the Premium interface automatically integrates all of your existing stations.
• Pandora says it has access to 40 million songs and that the company filters out “karaoke tracks, knock-off covers and pet sounds.” 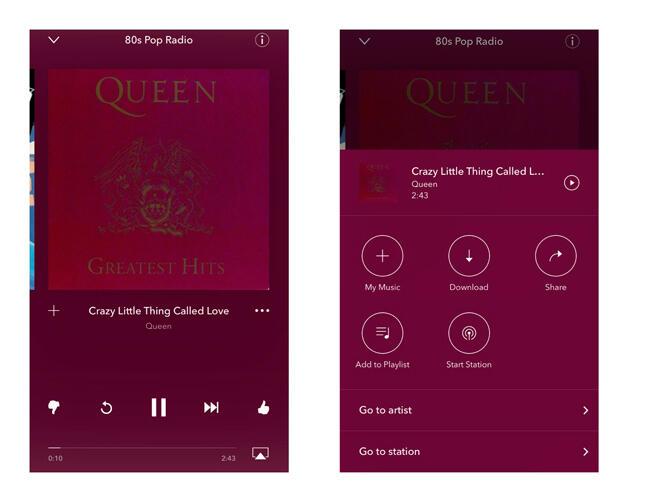 Low Points
• Right now, Pandora Premium is only available on iOS and Android phones and through some car audio systems.
• There’s no option to integrate your personal music collection into the Pandora Premium interface or upload content for cloud storage, as you can with some competing services.
• Due to licensing restrictions, some songs in Pandora’s catalog are only available for “radio playback,” meaning that you can’t play them anytime you want, nor can you download them.
• The “Add Similar Songs” function wasn’t as effective as the general algorithm when selecting songs for playlists.

Comparison & Competition
The two major competitors to Pandora Premium are Apple Music and Spotify, both of which have over 30 million songs in their catalogs and allow integration of your personal music files. Right now, both are available through more platforms than just phones, too. Apple Music costs $9.99/month and streams AAC files at up to 256 kbps. Spotify Premium costs $9.99/month and streams in the Ogg Vorbis format at up to 320 kbps.

Amazon Music is another competitor, and it’s included as part of a $99/year Prime subscription. Like Apple Music, Amazon puts an emphasis on curated playlists and lets you integrate your personal music files. You can read my recent review here.

TIDAL offers lossless and hi-res (MQA) music streaming for $19.99/month or compressed streaming for $9.99/month. TIDAL’s website lists its song library at 40 million songs, and the service is being integrated into a growing number of higher-end audio products and also emphasizes curated playlists.

Conclusion
Is Pandora’s Premium service a formidable competitor to major players like Apple Music, Spotify, and TIDAL? Maybe the best answer is: not just yet. On paper, it doesn’t yet compete with those services in terms of overall functionality: access is limited primarily to phones, and it can’t serve as your all-in-one music player, since it can’t integrate your personal files. Still, there’s a lot to like about it, especially if (like me) you’ve used Pandora’s free service for years and created/fine-tuned a large collection of stations that you like. Premium builds more functionality and flexibility into those stations while giving you more direct access to specific songs, artists, and albums–all through a nice, streamlined interface. Pandora is offering a generous 60-day free trial, which makes it easy to audition the service for yourself and see how it compares with whichever service is currently earning your $10/month.

Building a Reference Grade Media Room on a Budget – Part One