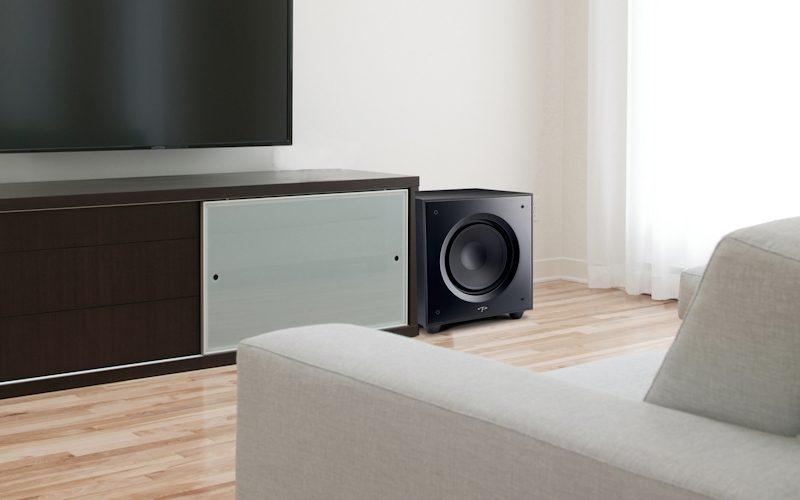 Paradigm's Defiance V10 subwoofer was a perfect fit, quite literally, when we needed to find a sub that would fit into a cabinet our family room. The Defiance series of subwoofers includes six models in two lines, the "V" and... 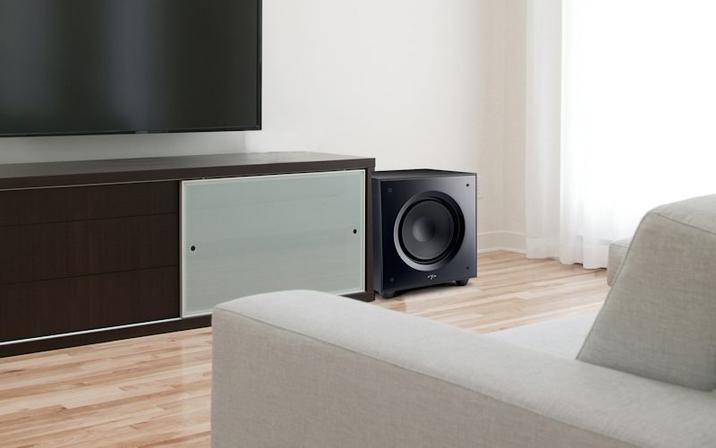 Paradigm's Defiance V10 subwoofer was a perfect fit, quite literally, when we needed to find a sub that would fit into a cabinet our family room. The Defiance series of subwoofers includes six models in two lines, the "V" and "X" lines. The "V" line is the less expensive of the two and has three models: V8, V10, and V12, priced at $449, $599, and $699, respectively. Each of these contains a single driver behind a removable grille in a black, downward-ported cabinet. The V10 measures 15.7 inches high by 14.3 inches wide and 14.9 inches deep, and weighs in at 33.5 pounds. The single driver is powered by a 120-watt Class D amplifier. The V10 can accept both speaker- and line-level inputs and has a port for a wireless transmission receiver ($219) if your layout makes running wires difficult. The wireless transmitter also made it possible for me to select locations other than the cabinets that the V10 fits perfectly into, but I wanted to stick with the same locations I had been using for the purposes of this review. So far, so good, even if all the above is a rather pedestrian feature set.

What makes the V10 stand out are some other features. The most important is the built-in Anthem Room Correction (ARC) software. ARC is one of the better room correction software packages out there, but it hasn't always been available in subwoofers at this price level. The Defiance subwoofers, other than the V8 model, are compatible with both ARC Mobile and ARC Genesis. ARC Mobile, as its name suggests can be run from your iOS or Android device and can even use your phone's microphone, although it goes without saying that you'll get better results with the included ARC microphone. This setup will provide basic calibration of the subwoofers and can easily be completed in a few minutes. ARC Genesis requires the external microphone and a computer, but provides much more control, such as selection of target curves, adjustment of filter frequency ranges, as well as other tools that make it easier to experiment with system changes and speaker positioning.

The Paradigm Subwoofer Control app lets you control multiple subwoofers. The app provides adjustments for level, listening modes, crossover, etc. One feature I found particularly helpful was the frequency sweep, which I used to track down and eliminate some buzzing items in my room.


Watching the bank fight scene in Harry Potter and the Deathly Hallows, Part 2 (UHD Blu-ray) the pair of Defiance V10s I installed in my cabinet were able to produce a respectable amount of bass to provide a solid foundation for the dragon stomps and wand blasts.

Battleship (UHD Blu-ray), as its name implies, features a large Iowa class battleship and the obligatory battle against... well, a big pile of ridiculousness. Let's not kid ourselves here. The one thing this sequence has going for it, though, is a barrage of "big guns" followed by a lot of canon fire, which the V10s reproduced with forceful palpability.

All that said, my open-floorplan living room was too big to be truly pressurized by the V10, even a pair of them, so I also tried them in a room closer in size to where I anticipate most will use them. I watched the same scene with the V10s in an approximately 220-square-foot space, and here they delivered noticeably more pressure and impact. The combination of dual subwoofers and ARC allowed me to get fairly even levels at all the listening positions, which is a big plus.


During my recent review of Paradigm's Décor speakers, I did some critical listening of many music tracks using the Defiance V10s to fill in the bottom end. On "Variations" by Submotion Orchestra from the album Kites (Tidal Hi-Fi, Smo Recordings), the combination of the smaller Décor speakers and deep synthesized bass line meant the subwoofers would have a lot of work to do. Namely, the relatively small size of the satellites means that the Defiance V10s have to play higher, covering a wider than normal frequency range. Using the ARC Genesis software, though, I was able to get a pretty smooth transition between the main channels and Defiance subwoofers, even in this more challenging setup.

Likewise, the RSL Speedwoofer 10S ($399, reviewed here) is also more powerful, with a 350-watt RMS amplifier, and it has a built-in wireless receiver (you still need to buy a $50 transmitter). The RSL does lack room correction, but it offers more diversity in terms of IO, which may not mean much if you have a system with an LFE output, but could come in handy in other systems.

Conclusion
This is a remarkably full-featured subwoofer that performs very well in small- to medium-sized rooms. A pair of Defiance V10s can be had for the price of a slightly larger subwoofer, but will provide a more even output at different listening positions than a single subwoofer.

The Defiance series has a variety of options to fit the needs of different scenarios. The V12 model is very similar to the V10 reviewed, here but with a larger, 12-inch woofer. The V8 model, yep, you guessed it, has an eight-inch woofer but also lacks many of the features found in the rest of the Defiance line, including app control, Anthem Room Control, and the ability to add wireless signal transmission. If you decide your budget can stretch a bit, the Defiance "X" series offers more power and refinement with a similar feature set.

The Defiance V10 was very much the "sweet spot" subwoofer for my living room system, though. The V10's size and configuration were perfectly suited for the cabinet locations I wanted to use, and the ARC Genesis room correction let me adjust the output to provide even bass responses across a large portion of the room. The V10 is never going to rattle the foundation; it was not built for that. It does exactly what it is designed to do, though, which is fill in the low-end frequencies for smaller speakers and provide low frequency effects channel support appropriately sized rooms.

You'll automatically be entered in the HTR Sweepstakes, and get the hottest audio deals directly in your inbox.
Subscribe
Connect with
Login
Connect with
2 Comments
Oldest
Newest Most Voted
Inline Feedbacks
View all comments
HomeTheaterReview Rating
Value:
Performance:
Overall Rating:
This is the static ad content. This is just a placeholder for now to get things styled.
Visit Website