Parasound Introduces An Improved Version Of Its Halo JC 3

Parasound Introduces An Improved Version Of Its Halo JC 3

Parasound Products is updating its Halo JC 3 with the Halo JC 3+. The upgrade includes several enhancements but features the original chip designed by John Curl. From Parasound Parasound, a leading manufacturer of high-end audio electronics, has introduced an... 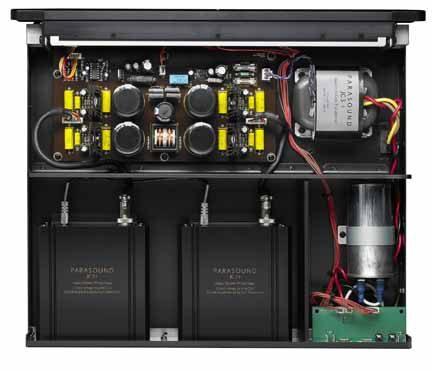 Parasound Products is updating its Halo JC 3 with the Halo JC 3+. The upgrade includes several enhancements but features the original chip designed by John Curl.

"Six years ago we asked John Curl if he would create a reasonably priced Parasound Halo phono preamp with ultra low noise, in the spirit of his masterpiece, the Vendetta," said Richard Schram, the founder of Parasound. "Three years later we introduced the remarkable Parasound Halo JC 3 which has earned rave reviews from the audiophile press and a legion of vinyl enthusiasts."

During the design phase of the JC 3, Curl had rejected variable load adjustment because, compared with fixed resistors, potentiometers generally have higher intrinsic self-noise, which is an anathema to creation of an ultra-low noise phono stage. Curl prevailed (he always does), and the JC 3 was built with limited switched input load impedance choices. This decision disappointed some vinyl enthusiasts and reviewers who consider input load fine-tuning to be essential for certain cartridges.

Curl and circuit board designer Carl Thompson eventually consented to including variable load impedance adjustments, but with these caveats for the potentiometers: 1) They must comply with stringent performance requirements. 2) They must be manufactured by Vishay, a highly-regarded manufacturer of low-noise electronic parts. At that time Vishay did not offer a potentiometer that met these specific requirements. However they recognized an opportunity, and eventually agreed to develop the part and manufacture it in small quantities for Parasound. The outcome of this effort is the Parasound Halo JC 3+.

Parasound also took the opportunity to make additional performance improvements. Curl narrowed the spectrum of Johnson/Nyquist noise in the resistor that loads the input stage to maximize its low noise capabilities. Circuit-board designer Carl Thompson tweaked the phono module board layouts to further optimize every performance parameter. The copper circuit board traces in the phono modules are now 24 karat gold-plated where each part is soldered to provide unprecedented transparency and musical detail.

The MC signal to noise ratio is improved from 75dB to 87dB, A-weighted. MM gain has been increased slightly from 47dB to 48dB, while MC gain has been lowered from 68dB to 64dB so extra-high output MC cartridges won't cause the JC 3+ to overload the inputs of some line stage preamps.

"Where the JC 3 background was utterly 'black,' the JC 3+ black is, well, blacker." notes Schram. "While these may seem like small details, the JC 3 is already an incredible performer and Parasound is going for that little bit more in the JC 3+."

Finally, at the suggestion of a few JC 3 customers, the company has added a simple on/off switch for the front panel P logo illumination.

The Parasound Halo JC 3+ will be available in late December in both silver and black finishes, and have a suggested retail price of $2,850.