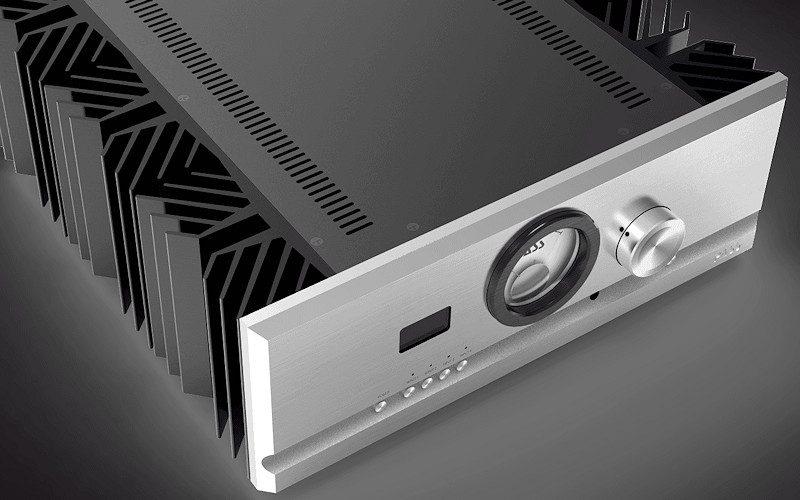 Amplifier Reviews, Equipment Reviews
Published On: November 7, 2016
We May Earn From Some Purchases Via Affiliate Links

Terry London explores the Pass Labs INT-60, a 60-watt integrated amplifier (the first 30 watts are pure Class A) with balanced inputs and outputs.

I confess, I'm a lifelong fan and owner of amplifiers built by Nelson Pass--going all the way back to his original company, Threshold, up to the present generation of Pass Labs amplifiers. It has been a real treat over the past two years to review the XA60.8 mono blocks (which I purchased) and the single-chassis X250.8 stereo amplifier. Historically, I have never auditioned any of the highly regarded Pass Labs integrated amplifiers. Therefore, it made good sense to me that my run of reviews on the Pass Labs .8 Series amplifiers would conclude with the company's brand new integrated amplifier, the Pass Labs INT-60, which retails for $9,000.

The INT-60 design is based on the hardware of a single-channel XA60.8 with lower bias current in the output stage and does not operate Class A to 60 watts. However, the first 30 watts are pure Class A. Pass Labs states, "The essential details that deliver the sound of the .8 Series have been tweaked in the subjective testing, and the result is very close. Another major change in the INT-60 is that the volume control circuit outputs are buffered by six-dB gain stages, whose input JFETs present many megohms of load, getting attenuator distortions down below the .001 percent line. The extra gain allows optimal figures for the power amp stages and offers improvement over the previous 'passive' circuits."

The INT-60 delivers 60 watts into eight ohms and 120 watts into four ohms. Regardless of what speakers I used or volume levels I attained in my months of auditioning this wonderful integrated amplifier, it never left pure Class A rating except for a few brief seconds on gargantuan crescendos that were well over 100 dB in volume.

As to be expected from Pass Labs, the superlative build quality and visual appearance of the INT-60 compete with any equipment on the market today. The dimensions of the INT-60 are 7.6 inches high by 19 inches wide by 21.2 inches deep, and it weighs 93 pounds. On the beautiful silver front panel, the following are located from left to right: the standby power button; a display that shows volume level; input buttons one through four with input LED indicators; a bias meter; an IR window; volume control; a mute LED indicator; and, lastly, the mute button. On the rear panel, you will find the IEC input, the main power on/off switch, XLR and RCA preamp outputs, XLR and RCA preamp inputs, and two pairs of very high-quality speaker-wire connections.

The remote control is built out of high-grade aluminum, is easy to use, adjusts the volume, and controls the on/off switch, mute, and input selection.

The Hookup
Pass Labs uses some of the finest shipping boxes/materials to ensure that your purchased piece(s) arrive in pristine condition. The INT-60 demo unit sent to me was brand new, so I put at least 100 hours of burn-in on it before I started my serious listening sessions. I inserted the INT-60 in both my large reference system and my smaller auditioning system. Speakers that the INT-60 powered during the review process included Lawrence Audio Cellos and Double Bass, Bache Audio 002AB, Clearwave Resolution BE, Silverline Prelude Plus, and Role Audio Enterprise. My source was the MBL 1621 transport, which drove the Concert Fidelity-040 battery-powered hybrid DAC. All the wiring in both systems was Silver Reference MG Cable IC and MG Cable Reference Three Copper Speaker Wire. Both auditioning systems use a combination of Harmonic Studio Master and Ensemble reference power cords into a Running Springs Audio Dmitri power conditioner.

Performance
I made the decision to use the same musical selections that were used in the XA60.8 and X250.8 amplifier reviews because that would hold constant the variables of tonality/timbres, overall dynamics, and spatiality/soundstaging to compare the performance of the INT-60 to those other great Pass Labs amplifiers. My first selection was an album by my favorite tenor saxophonist, Johnny Griffin, called The Kerry Dancers and Other Swinging-Folk Music (XRCD Riverside). It became very apparent that the INT-60 shared the trait of having no noise floor, just like its pure amplifier brothers. The INT-60 was totally quiet, so the smallest micro-details emerged out of a totally black background. The timbres and tonality of Griffin's saxophone were on display; the way that the INT-60 presented Griffin's unique tenor saxophone tone could be described as an "effortless purity."

My next musical selection was Erich Kunzel's recording of Orchestral Spectaculars (Telarc) to see how the INT-60 could handle the lower midrange of big power music to provide the foundation that allows a system to sound more realistic. If there was a difference in this area compared with the more powerful X250.8, it was so slight that I would have to "strain" to hear it on most of the selections on this album. This lower midrange foundation was totally integrated in the overall fabric of the music, leading to a lifelike smoothness and natural presentation.

Another musical selection I used was Larry Golding's album Ramshackle Serenade (Pirquet), which is a wonderful modern jazz recording that never loses its underlying blues feel. Additionally, it is a great recording to use to see how an amplifier can reproduce the top-end extension of drummer Bill Stewart's cymbals, as he uses both sticks and brushes on them. The INT-60 got the decays, the leading edge of the cymbals, and the air around the drum kit with transient clarity, but it never crossed the line of sounding harsh or analytical.

The next album, Kenny Burrell's Midnight Blue (Blue Note), was recorded by the legendary sound engineer Rudy Van Gelder with a beautiful overall rich/warm perspective that allows you to "cozy up" to the feeling in this jazz/hard bop/blues classic. The INT-60 was able to let the velvety, smooth, relaxed "sweet/warm" sonic picture of this recording flow easily into my room.

My final selection was the classic album Abraxas (Sony) by Carlos Santana. I used the cut "Singing Winds, Crying Beasts" to see how well the amplifier could reproduce tiny details that are imbedded in the mix and if the amplifier could create a wall-to-wall soundstage. When I used this selection to audition the XA60.8 mono blocks, I was amazed at hearing voices and chatter that I have not been able to hear over the years with other amplifiers. The new INT-60's resolution/clarity allowed me to easily hear all these micro-details, as I did with XA60.8s. The wall-to-wall soundstaging was at a reference level in both amplifiers.

The Downside
If there are any shortcomings in the Pass Labs INT-60, they would revolve around four possible areas. First, I had no speakers in my house that the INT-60 could not drive effortlessly to any sound pressure level that I would care to listen to. However, I'm sure that there might be some speaker that might need more watts/current, and that's where the X250.8 (250 watts into eight ohms/500 watts into four ohms) could come into play.

Secondly, because of the INT-60's size and the heat it produces, this is not an amplifier to put into a standard enclosed rack. It needs open space to breath and a large shelf to sit on.

If you are the type of listener who likes to tailor the sound of your system by using solid-state or tube-based preamplifiers, you might be better off sticking to one of Pass Labs great-sounding single-chassis or mono-block amplifiers.

Finally, the INT-60 lacks some features that can be found in less expensive integrated amps, such as an internal DAC, a phono stage, and a home theater bypass option. You can use the preamp outputs to drive a pair of subwoofers.

Comparison and Competition
Based on price, the two integrated amplifiers that would be in competition with the Pass Labs INT-60 would be the Simaudio Moon 600i that retails for $9,000 and the Jeff Rowland Continuum S2 that retails for $9,500. When comparing the INT-60 to the Simaudio Moon 600i, I found that the Simaudio Moon 600i sounds much more "solid state"--its overall tonality is slightly bright and thinner sounding. Having great dynamics and transparency, however, it sounded more like a great amplifier than music to me. On the other hand, the Jeff Rowland Continuum S2 also offered great resolution and speed; however, it leaned more toward having an overall "cool" sound that washed out the colors and tonality of acoustic instruments that the Pass Labs INT-60 was able to capture with great beauty and warmth.

Over the last 20 years, I have grown accustomed to the musical beauty of Pass Labs amplifiers. Nelson Pass and his crew are always working on the next generation of amplifiers that take the music to an even higher level of naturalness and create the illusion of live music. However, in all these years, I have never had a Pass Labs integrated amplifier in my home system to compare its performance with my Pass Labs amplifiers and separate preamplifiers. Now that I have spent time reviewing the Pass Labs INT-60 integrated amplifier, I can honestly say that you can get all of the virtues found in the .8 Series amplifiers in the INT-60: reference-level transparency/clarity, powerful/accurate dynamics, an airy natural top end, and a sweet/natural overall tonality thatis often associated with the best tube-based amplification. If you are the type of listener who enjoys experimenting with different types of preamplifiers to change the sound of your system at certain times, it might be to your best interest to select one of the Pass Labs amplifiers. However, if you want to hear beautiful music produced by an integrated amplifier that is built to last a life time and is one handsome-looking beast without constantly messing with your system, the Pass Labs INT-60 integrated amplifier is for you.

You'll automatically be entered in the HTR Sweepstakes, and get the hottest audio deals directly in your inbox.
Subscribe
Connect withD
Login
Connect withD
3 Comments
Oldest
Newest Most Voted
Inline Feedbacks
View all comments
HomeTheaterReview Rating
Value:
Performance:
Overall Rating:
This is the static ad content. This is just a placeholder for now to get things styled.
Visit Website