Pass Labs brought their big guns with them to the 2011 Consumer Electronics Show: the Concept Amplifiers. These amplifiers are bigger and more improved versions of the flagship XA200.5 amplifier. 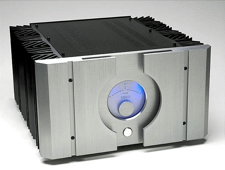 Pass Labs' new Concept Amplifiers are high-bias, Class A, monoblock models employing the company's ultra-symmetry circuit. Originally designed by Nelson Pass for use at his own retreat, they were shown in "concept" form at the 2010 CES.

They are like large versions of the company's flagship XA200.5 Amplifier, notable for its high output capacity, power and stability. Like the XA200.5, they deliver music without straining, and possess twice as much chassis, power supply, output stage and dissipation capacity.

The Concept Amps' gain circuits operate with less feedback and degeneration than previous designs to deliver a more relaxed liquid quality while maintaining high power and control into difficult loads.